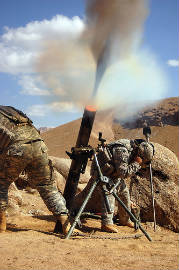 White House Press Secretary Robert Gibbs insists that President Obama is still reviewing his options when it comes to the war in Afghanistan, but has so far refused to indicate where US policy is heading. This has not stopped others from speculating about how the new administration will choose to meet the challenges ahead.

A report (.pdf) released today by the Carnegie Endowment for International Peace argues that following the conventional (and prevailing) wisdom on how to prosecute the Afghan War will only make things worse. Washington and its NATO partners recognize that Afghanistan is slowly slipping away, back towards the chaos that gave birth to the Taliban and played host to Al Qaeda. The solution, most say, is to withdraw US troops from Iraq and redeploy combat units to Afghanistan, where they will establish the level of security required for political and social development to occur. (It must be said that European governments are loathe to shoulder much of the burden.) Just this morning, Politico reports that Obama will soon request that at least another 10,000 troops deploy to Afghanistan, the first of several new deployments that are in the planning stages.

This is precisely the wrong way to go, says Gilles Dorronsoro, author of the Carnegie report. Applying foreign policy realism to the problem of Afghanistan, he writes that “the international coalition now has limited resources and a narrow political time frame to create lasting Afghan institutions. Yet, building such institutions is our only real exit strategy.” The troops we have at our disposal, even after an Iraqi-type “surge,” are unlikely to make much difference on the ground, and as Dorronsoro points out, small-scale surges in the past have only led to increased violence and an emboldened insurgency.

Instead of further militarization of the conflict, Dorronsoro suggests a softer approach, one that he thinks would have a better chance of creating Afghan governmental institutions that could eventually stand on their own and permit US and NATO withdrawal from the country. His recommendations, as summarized in a press release from Carnegie:

The Joint Chiefs appear to agree with at least some of these recommendations. They are reportedly preparing a memo for President Obama, recommending that he abandon his predecessor’s goal of establishing a thriving, Western-style democracy in Afghanistan and instead turn the military’s focus to pursuing Taliban and Al Qaeda fighters across the border in Pakistan. Call it a lowering of expectations, which it most certainly is, but perhaps recalibrating our goals is the only way to salvage things. Still, at virtually every press conference held since Obama took office, Gibbs has cautioned journalists not to believe reports that the president has a made a final decision about the size and focus of future troop deployments.

Meanwhile, a new report from the Congressional Research Service (CRS) offers no comfort on the challenges the lie ahead, describing “a deteriorating security situation and no comprehensive political outcome yet in sight.” A Taliban victory remains unlikely, but left unchecked, the current trend could well lead to a recurrence of civil war between competing tribes and warlords—conditions that are to some extent “currently manifested in parts of southern Afghanistan.” The situation calls for a wholesale reevaluation of US policy, which should include “clarifying U.S. national interests in Afghanistan and the region; defining clear strategic objectives based on those interests; determining which diplomatic, economic, and military approaches to adopt, and what resources to commit to support those approaches; prioritizing ‘Afghanistan’ versus other national security imperatives; and helping marshal a coordinated application of international efforts.”

Any change of strategy must come soon, though, before things spin even farther out of control. But even if short-term gains are made, notes CRS, there’s no guarantee that they will endure. The insurgency will not go away quietly and will likely lie dormant until another opportunity presents itself. Like the Afghans say, “You have the watches; we have the time.” Figuring out how to take time away from the Taliban is the puzzle now facing the Obama administration. It won’t be an easy one to solve.