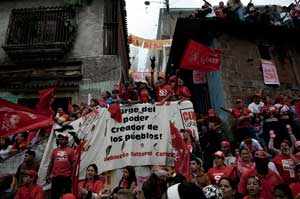 Last Friday, Hugo Chávez had some helpful advice for Barack Obama, who has been under fire from conservatives worried he is paving the road to socialism in the United States. At the groundbreaking for a new state-owned steel plant, the vociferous Venezuelan president said: “They’re criticizing him because they say he’s headed toward socialism. Come, Obama, get in line with us toward socialism. Come on, this is the only path.” This sort of talk is a far cry from the days of George W. Bush, for eight years a reliable foil for Chávez—both “donkey” and “devil.” And though he did not fail to note that the U.S. is still a “murderous, genocidal empire,” Chávez seemed to express real concern about the “sad fate” of American workers, millions of whom have lost their jobs in recent months. “The capitalist model and its perverse values have failed,” he said. “The American empire—that’s coming to an end.”

As Venezuelans voted last month on a referendum to eliminate term limits for government posts—allowing Chávez to run for reelection in 2012, when his current term is up—I visited Caracas to see just how his oil-rich country’s “socialism of the 21st century” was faring. On a foggy afternoon in the massive slum of Catia, which crawls over the high hills in the west of Caracas, I spoke to red-shirted residents thronging a wide muddy intersection. All around us were houses of dull-red cinderblock stacked slipshod upon one another and red flags and salsa music. The air was choked with exhaust from motorcycle taxis that ferried supporters up from the neighborhood’s lower reaches. It was two days before the February 15 vote, and they were waiting for Chávez to roll through in a final campaign caravan supporting the referendum.

The residents told me how much their lives have improved in Chávez’s ten years as president. Missions have been established that provide free access to medical care and education. Roads have been paved and gas lines installed. They have received credits to improve their housing. Government-subsidized markets provide them with food on the cheap—especially vital since last year food prices in the capital rose nearly 50 percent. “He’s the first president to care about the poor” was a common refrain.

Yet Chávez has lost much of his base among the poor, especially in urban areas like Catia. Though he won the referendum with a nearly 10-point margin, it is far less than the 26-point margin he secured in the 2006 presidential elections. Even chavistas generally acknowledge that corruption is endemic—but more important, violent crime has skyrocketed over the past 10 years; polls indicate it is Venezuelans’ most pressing concern. I spoke to many who had become disillusioned with Chávez’s “Bolivarian revolution.” In the nearby barrio of 23 de Enero, a renowned chavista stronghold, a 20-year-old nurse named Yaneth Martín told me the situation was dire. “When had you ever seen so many deaths in one weekend?” she asked.

Now, with oil prices hovering near $40 per barrel, down from a high of almost $150 last summer, Chávez’s ability to continue financing the social programs that make him popular may be in danger. The government claims to have $29 billion in foreign reserves, but according to Ricardo Hausmann, a former planning minister and now the director of Harvard’s Center for International Development, ever-increasing government spending will soon take its toll. Foreign investment has been decimated by a wave of nationalizations; there have been two in just the last couple of weeks. Inflation is the highest in Latin America. Oil accounts for about 95 percent of export revenues, but in recent months the state oil company has been unable to pay close to $8 billion dollars in outstanding bills. (It only began to repay them last week.) “This is a car going 150 miles per hour toward a wall, and the driver has yet to put his foot on the brake,” Hausmann told me. “Something will have to give.”

The director of the CIA, Leon Panetta, recently warned that economic instability in Latin America was one of the U.S.’s most pressing security problems in the region, making particular note of Argentina, Ecuador, and Venezuela. Bush had mostly neglected his neighbors to the south, and much to his administration’s dismay, it was Chávez who filled the vacuum, spreading his oil wealth around to the governments of Cuba, Bolivia, Ecuador, Nicaragua.

Now Chávez appears to be here to stay—perhaps well beyond Obama’s four or eight years. In the run-up to the referendum, the opposition was unable to compete with Chávez’s brazen use of state resources in support of the “Sí” campaign, and even among their own ranks, opposition supporters see few who might be a contender in the 2012 presidential elections. Carlos Vecchio, a 39-year-old lawyer heading up the “No” campaign, suggested that one might just emerge spontaneously. “I believe in the example of Obama,” he told me. “Four years ago, who knew who he was? And now look.” Though his tone was hopeful, it was a grim reflection of the vacuum of strong, charismatic leaders who might represent an alternative vision.

Yet there is room for such a vision among those appalled by the deterioration they see in the country’s economy, public services, crime, and most alarming of all, in its democratic institutions. When last year Human Rights Watch released a report denouncing widespread political blacklisting, erosion of judicial independence, and intolerance of criticism, the government’s response was to summarily expel the director and deputy director for Latin America from the country. Secretly recorded conversations between members of the opposition are often broadcast on VTV, the state-run television channel. Public employees, of whom there are more than 3 million in Venezuela, have been compelled to participate in pro-government rallies; I spoke to a young National Police trainee who did not support Chávez but was going to vote yes because he had been told to do so, and feared it could be discovered if he did not.

In early January, in an interview with the Spanish-language news channel Univision, Obama called Hugo Chávez a “force that has interrupted progress in the region.” This set off a wave of accusations that under the new American president, it would be business as usual with the oil-rich nation—and prompted Chávez to compare Obama’s “stench” to that of Bush. But last month the US State Department offered cautious congratulations to the Venezuelan people for their participation in the referendum. For his part, Chávez said he was ready “any day to initiate a process of rapprochement.”

Michael Shifter, director of the Andean program at the Inter-American Dialogue, said it was a positive step after eight years of chilly relations. (The lowest point probably came when the Bush administration applauded the 2002 coup that removed Chávez from power for 47 hours.) “The State Department’s statement suggests there will be an opening, that they’ll try to push the reset button on the relationship,” he said. “The first step is putting ambassadors in both countries”—they were mutually expelled last September—”but from Obama’s point of view, he’s going to want to move cautiously. He will probably not be in a big rush to have a high-level meeting with Chávez and give him warm abrazos.” In Shifter’s view, this would only give Chávez more political capital—much as, in its own way, Bush’s antagonism did.

This week, Congress lifted many of the Bush-era travel and trade restrictions on Cuba. The move could be read as an olive branch not just for the island nation, but for Venezuela as well—Chávez has declared Fidel Castro, with whom he mains a close friendship, to be his ideological godfather. When Obama and Chávez both attend the Fifth Summit of the Americas in Trinidad and Tobago next month, it will be their first chance to meet. Will their small gestures add up to something—or will each remain true to his country’s perennial freight of mistrust?

Alexander Cuadros is a freelance writer based in Bogotá, Colombia.