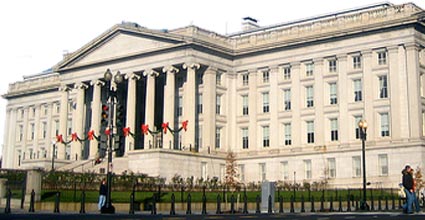 On Wednesday afternoon, as President Barack Obama was leaving the White House for a town hall meeting in California, he spoke for 15 minutes to reporters about the AIG controversy. Responding to the rising rage over the $165 million or so in bonuses paid to executives at the bailed-out insurance firm, Obama noted that he was quickly developing policies to prevent future AIG-like catastrophes. And he slammed Wall Street’s culture of “excess greed, excess compensation, excess risk taking.” To demonstrate that he’s committed to battling such greed, the president cited his work in the Senate to rein in executive compensation. Noting that he and Rep. Barney Frank (D-Mass.) had each introduced legislation on this front in 2007, Obama declared that “there were some people who attacked us, saying government has no business doing that.”

One of Obama’s opponents at that time was Mark Patterson, a lobbyist then for Goldman Sachs, the investment banking firm, which opposed the Frank-Obama initiative. Yet Patterson is now chief of staff to Treasury Secretary Timothy Geithner, the embattled point man in the Obama administration’s endeavor to undo the notorious AIG bonuses. That is, a Washington influence-peddler who worked against Obama’s effort to limit excessive corporate pay is now a key member of the Obama administration team that is supposed to contain excessive compensation in the AIG case and in general.

In 2007, Frank, the chairman of the House financial services committee, introduced H.R. 1257, the Shareholder Vote on Executive Compensation Act. The bill required public companies to allow shareholders to hold nonbinding votes on executive compensation plans. The measure—dubbed “say on pay”—was a modest step, though only one of the few attempts then to address exorbitant salaries. It did not limit pay for corporate managers; the legislation would merely permit shareholders to express their displeasure with compensation packages. Corporations would be free to ignore the outcomes of these symbolic votes. Still, the banking industry opposed the bill. And Goldman Sachs, for which Patterson was a registered lobbyist from September 2005 to April 2008, was no fan of “say on pay.” Sachs’ chief executive, Lloyd Blankfein, who took home at least $70 million in 2007, has argued that shareholders are “less sophisticated and have less understanding” of compensation issues than corporate board members.

According to lobbying disclosure forms (PDF), Patterson was one of four Goldman Sachs lobbyists registered to work on HR 1257. How the group tried to influence congressional action on the bill is not revealed in the documents, but given Goldman Sachs’ opposition to this reform, Patterson and the others were surely not trying to help the measure pass. (In January, a Treasury official confirmed to the Associated Press that Patterson’s lobbying portfolio included this compensation measure.)

Despite industry opposition, the House approved Frank’s bill on a 269-to-134 vote on April 20, 2007. That same day, Obama introduced a version of the legislation in the Senate. The bill, which initially attracted only five cosponsors, was referred to the Senate banking committee. Weeks later, Obama sent a letter to Sen. Chris Dodd (D-Conn.), the chair of that committee, asking him to hold a hearing on the proposed law. Obama wrote:

I believe public discussion and debate over executive compensation packages would force corporate boards to think twice before signing over millions of dollars to CEOs. Certainly, many CEOs are ably steering their firms and deserve their paychecks. But the rate at which executive pay has grown, as compared to stagnating wages among American workers, is rightfully frustrating shareholders and employees alike, especially given the lackluster performance of many of the companies paying these high salaries.

Dodd, then running against Obama in the Democratic presidential primaries, apparently was not convinced. He held no hearings on the bill, and the measure met a quiet death in his committee. (Whatever Patterson had done, he could claim a success.) But on the campaign trail last year, Obama repeatedly touted the legislation to show he was serious about corporate reform. At an Indiana press conference in April 2008, he said of the measure, “This isn’t just about expressing outrage. It’s about changing a system where bad behavior is rewarded—so that we can hold CEOs accountable, and make sure they’re acting in a way that’s good for their company, good for our economy, and good for America, not just good for themselves.”

As vice president for government relations at Goldman Sachs, Patterson, who had previously been policy director for Sen. Tom Daschle, handled a wide assortment of financial, banking, patent, energy, and insurance issues. He worked on tribal gaming matters. And he was registered to lobby on credit default swaps and carbon trading. Because of his lobbying activities, Patterson did not meet the tight ethics rules Obama adopted to slow down Washington’s ever-spinning revolving door. His appointment—which was not subject to Senate confirmation—was questioned by White House reporters and criticized by government reform outfits. But the Obama administration granted Patterson a waiver, and the ex-Goldman Sachs lobbyist was able to join Treasury. (Goldman Sachs has been one of the biggest beneficiaries of the federal rescue of AIG; the fallen insurance firm, which has received $170 billion in funds from the Federal Reserve, has used that money to pay Goldman Sachs $6.8 billion.)

On Wednesday, while recounting his and Frank’s attempts to enact “say on pay” legislation, Obama pointed to their measures as examples of “smart regulations” that enhance “oversight, transparency, accountability.” And he remarked, “All we’re trying to say is you’ve got to be accountable to somebody. And it’s that measure of accountability that I think is part of what has made America strong, and we have to get back to those kinds of values.” But Geithner’s right-hand man was not long ago paid well to undermine those values. How Patterson has gone from serving Goldman Sachs to serving the Obama administration is a tale that could use some more transparency.

UPDATE: After this story was posted, a Treasury Department spokesman issued a comment: “Mark Patterson is in full compliance with the administration’s strict ethics policy, and has recused himself from discussions on this and all other issues he worked on during his time in the private sector.” Does this mean that Geithner’s chief of staff cannot be involved in conversations and decisions regarding corporate compensation issues, including the AIG bonuses? If so, wouldn’t that place Geithner at a disadvantage as he tries to handle such matters? We’ve asked Treasury for a response to these questions.