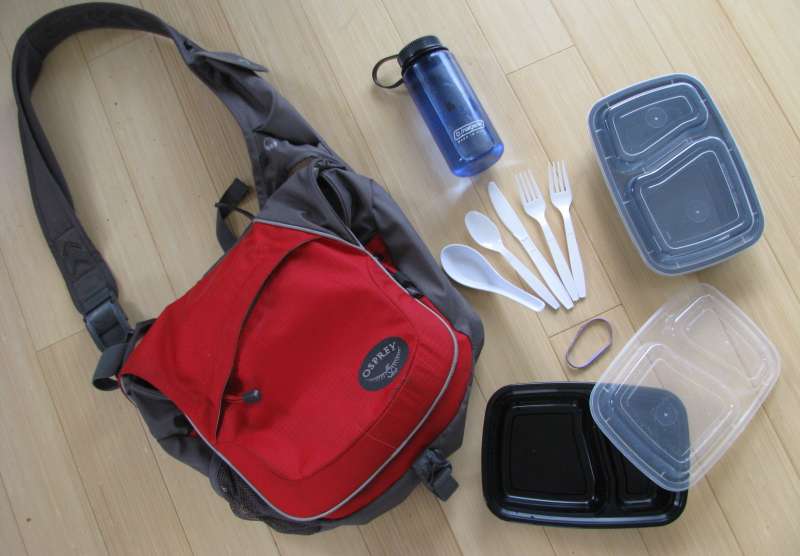 In the course of one flight from San Francisco to Tokyo I was handed 13 plastic drinking cups, a new one for every drink. When I held onto one and tried handing it back for the next fill-up, the flight attendant handled it like it was radioactive. Hmm. Northwest Airlines claims to be greening itself [pdf] but the disposable aftermath of even one in-flight meal suggests otherwise. Even assuming they might recycle some of this stuff (will they?), recycling ain’t cheap. It’s energetically expensive and sometimes counterproductive. Can’t we just wash some dishes?

Artist Chris Jordan claims with his usual punch-in-the-gut visual impact that the airline industry in the US uses 1 million plastic cups every six hours. Not sure where he got that number but my flight alone must have squandered something like 4,000 cups.

The problem bugs me on the ground too. So here’s my solution. I call it my Urban Mess Kit. It’s composed of a cool Float messenger bag from Osprey made of PET plastics with a a minimum of 70-percent recycled materials, mostly recycled drink bottles. I throw in two polypropylene doggy-bag containers that came with my Chinese restaurant leftovers. They’re designed for one-time-only use but in reality they’ll likely outlive me. I add two sets of plastic cutlery picked up from to-go meals and then NOT thrown away. Finally, one Nalgene drink bottle that I use for hot and cold drinks.

Okay, Nalgene isn’t perfect. This older bottle I have probably isn’t even BPA-free like the newer stuff. It’s definitely not trendy like stainless. But it’s overwhelming advantage, IMO, is that I bought it used from a thrift store & so did not encourage the creation of any more plastic to clog the arteries of Planet Earth.

I use my Urban Mess Kit for most everything these days: drinks bought on the go (I hand over my bottle); food bought on the go (including deli counters); leftovers; impromptu picnics. Plus there’s still room in my Osprey pack for my laptop, wallet, glasses, keys, phone, a book and more. It all nests into a small footprint, pun intended. If I was entrepreneurial, I’d build and sell these kits. But it would be friendlier to the environment if you reused some of the disposable stuff coming your way and made your own.

Oh, and as part of its Triple-R program for US customers, Osprey joins with the Mountain Fund to take back your old (still useable) pack and give it to someone somewhere in the world who needs it: women trying to break into the trekking and climbing industries in Nepal & Uganda; kids in orphanages in Kyrgyzstan who can learn to socialize on treks; city kids who need to see wilderness. In return, they’ll give you 10 percent off a new Osprey bag. So if you really need a new bag, this is a good way to mitigate some of your consumption.