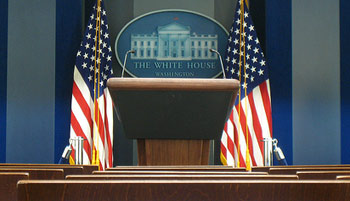 What happened to Barack Obama’s CTO?

The position was central to the technology and transparency platforms the President outlined on the campaign trail, but Obama has yet to tap his administration’s Chief Technology officer—and once-enthused open government advocates are getting restless.

A government-wide CTO would be the first of its kind, and Obama’s proposal, though ill-defined, seemed promising. The fullest explanation of the position was contained in the campaign’s technology platform:

The CTO will ensure the safety of our networks and will lead an interagency effort, working with chief technology and chief information officers of each of the federal agencies, to ensure that they use best-in-class technologies and share best practices.

The CTO will have a specific focus on transparency, by ensuring that each arm of the federal government makes its records open and accessible as the E-Government Act requires. The CTO will also focus on using new technologies to solicit and receive information back from citizens to improve the functioning of democratic government.

But while campaign documents suggested the CTO would ensure technological best practices in order to increase efficiency and facilitate transparency, technology advocates and open government activists envisioned an office that could do far more. Perhaps, some speculated, the CTO could push for increased broadband access in rural areas. Maybe he or she could use the work of the Sunlight Foundation and other open government groups as inspiration, making more government data available online and developing new tools to make it easier to access and interpret.

Writing in Politico in December, Micah Sifry and Andrew Rasiej—creators of the Personal Democracy Forum and the blog TechPresident—published a wish list for the future CTO that demonstrated the enthusiasm of the government transparency community:

The CTO should be tasked along with the Council of Economic Advisers to conduct a study of all the benefits of achieving universal, high-speed wireless access…

The CTO should be tasked with developing a government-wide online platform — call it Citizen.gov if you like — for civic engagement that connects Americans to each other to identify and solve problems…

The CTO should help ensure that the Obama administration is the most open, honest and accountable in history….

Sifry and Rasiej’s ambitious vision was quickly embraced by a number of their fellow activists. But it may have been overly optimistic.

While Obama has already given the CTO homework—he or she is tasked with writing recommendations for an Open Government Directive that will implement Obama’s transparency agenda—the position remains unfilled, long after many activists thought it ever would. (As it stands, Obama and his staff are struggling with the White House’s outdated technology.) Last weekend, attendees of the Sunlight Foundation’s Transparency Camp, a gathering of top members of the open government and technology communities, were genuinely befuddled. None in this tight-knit community could identify the frontrunners for the position, and few had explanations for the delay. Multiple in-the-know sources griped that the CTO will likely be a neutered position, lacking budgetary powers or a direct line to the president, and that the Obama team does not appear to have resolved basic questions, including where the CTO will reside on its organizational chart. (One report suggests the CTO is currently being slated for the president’s Domestic Policy Council.) The general attitude was pessimistic—no one believed that the CTO would be a high-level position capable of improving the use of technology across executive branch departments or of convincing hidebound bureaucracies to use technology to make their operations and decisions more accessible to the public.

“I am somewhat concerned at this point,” says Ellen Miller, head of the Sunlight Foundation. “Things are moving along rapidly. WhiteHouse.gov is developing, Recovery.gov is developing, without the input of a CTO. Maybe I shouldn’t be concerned because WhiteHouse.gov and Recovery.gov are certainly using technology in pretty sophisticated fashion to engaged with citizens and to make information available in user-friendly ways. But I think a lot of us are saying, ‘Okay, when is this going to happen?'”

One reason why this unfilled job is raising red flags is because Obama’s CTO is technically supposed to be writing the Open Government Directive, in conjunction with the director of the Office of Management and Budget and the head of the General Services Administration. Obama ordered the creation of the directive on January 21, his first full day in office, and set a 120-day deadline. Now, nearly six weeks have passed with no news about Obama’s CTO pick.

“There’s no CTO in place, so he or she is having no input into [the directive], and if he or she is supposed to be responsible for implementing it, then we have a disconnect,” says Miller. “I’m concerned that a directive might get written that a CTO may not believe in. Or it may not incorporate his or her thoughts.”

What appeared like a revolutionary new office now looks more and more like it will be yet another cog in the federal bureaucracy. Last week, when Sifry and Rasiej took to the pages of Politico again, their exasperation was evident. “It is imperative that Obama name a forward-thinking CTO without further delay,” they wrote. “Every day he delays is one more day that the federal government lives in the 20th century, while we live in the 21st.”