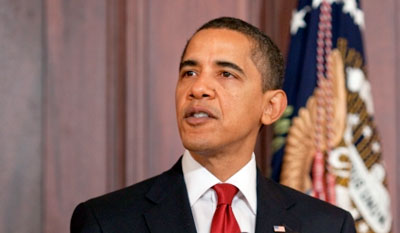 Weeks ago, I obsessed on a political point: would President Barack Obama mobilize his millions of voters to apply political pressure on Washington to pass his policy initiatives. At that time, the stimulus package was the top item on his agenda, and the White House was not doing much to activate the Obama millions to boost support for the legislation in Congress. As the stimulus fight proceeded, Organizing for America, the spin-off of the Obama presidential campaign, did zap out an email to its list of 13 million and asked those supporters to hold house parties to discuss the recovery package. But discussing something is not quite the same as fighting for it.

As it turned out, Obama was able to win approval of his stimulus package without the help of his grassroots base–though he did so largely on a party-line vote. But as Obama confronts additional challenges in Congress on numerous fronts–his budget, the bank bailout, his mortgage crisis initiative, health care reform–his political machine is taking steps to prepare his foot soldiers for duty. But the steps are hardly bold.

On Monday, Organizing for America emailed its list and asked each to watch a video of Mitch Stewart, the group’s director. Those who clicked on the link could see the thirty-ish Stewart sitting in an office of seeming modest nature, in front of a map of the United States. “The movement that you built is just getting started,” he says. He notes that “special interests” aim to block Obama on his key priorities: health care, energy, and education. “It’s up to you to make sure they don’t stand in our way,” he adds.

On the video, Stewart announces the “Pledge Project.” He describes it as an “ambitious effort to map out and identify support for President Obama’s economic blueprint.” He asks viewers to declare their support for Obama’s economic plan. “Once you do,” he says, “we will ask you to build support in your own communities by forwarding this pledge by email, by knocking on doors, and by making phone calls.” He adds, “By pledging and building support, you will be taking the first steps toward establishing a nationwide grassroots network, neighborhood by neighborhood.”

It’s a rather low-key pitch, delivered in a flat, no-drama manner. It’s not pegged to any specific fight under way or to come. Stewart makes no reference to recalcitrant Republicans. And on the web page next to the video is “The Pledge” he wants supporters to sign. It is simple and two sentences long:

I will ask friends, family, and neighbors to pledge their support for this plan.

It appears that the Obama political machine is rebuilding its activist base–rather than presuming it is there–and renewing their list of millions. They are prospecting and looking to see who among Obama’s campaign supporters are still out there and ready to do political battle on his behalf. And they are easing Obama’s base into the conflict. After all, it doesn’t take much to sign an on-line pledge and promise to jawbone friends and relatives. But Stewart adds, “We’ll be asking a lot of you in the weeks to come.” He’s foreshadowing something.

After Obama won the presidency, pundits and political observers wondered how he would leverage the millions of people who had signed up with his campaign as volunteers or contributors. That was natural, given that Obama had triumphed in November partly because he had been able to sell his campaign as a movement. Yet in the first weeks of his presidency, Obama relied on conventional, inside-Washington tactics, depending on congressional leaders, cutting deals on Capitol Hill, and doing virtually nothing to involve his followers in the process.

Now, Organizing for America, which is part of the Democratic National Committee, appears to be proceeding with plans to arouse the base and put it into play. It’s not doing so with great flash. And there are no indications how Obama and his political strategists intend to use the reactivated millions. But there surely are fights ahead. And it certainly won’t hurt Obama if several million troops are ready when he decides it’s time to call them up.