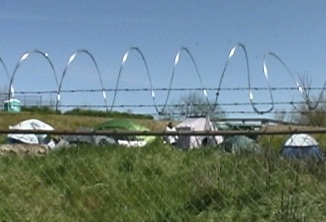 You may have seen Oprah‘s version of the Sacramento “tent city” story recently, which involves a sensationalist video (preview below, full report here) of reporter Lisa Ling talking to Dorothea Lange-styled Great Recession refugees. NBC and Fox News have also flocked to the story; by last weekend, authorities were turning away news crews. But this week, we went to visit the 300 people living in tents along the American River at the north end of downtown Sacramento, and what we found was quite a bit different from the version you’ll see on prime time. Here’s the factchecked reality of what’s going down at California’s “new” Hooverville.

First: There are about 300 chronically homeless people living in Sac-town tent cities, and man, are they sick of reporters. We brought a camera with us in hopes of shooting video for MoJo, but we were lucky just to get in and talk to people, let alone film. And forget the recession angle. Joan Burke, Director of Advocacy at a nearby homeless-oriented charity Loaves & Fishes, told us she “wouldn’t say the recession isn’t a cause” of the increasing number of tent city residents, but that the city didn’t happen overnight. The place has been slowly growing over the past two years mostly due to a de facto moratorium on arrests for illegal camping and the safety of sleeping in numbers. A local cop, Mike Cooper has been on the beat for almost nine years, and told us that he doesn’t “know anybody who just moved out of a foreclosed home,” who is now living in the tent city.

But after the initial surge of misleading news reports, something good has happened there. Loaves & Fishes saw an uptick in people donating their time and resources to aid the city’s homeless. The publicity has also forced the City of Sacramento to do something about tent city, what Mayor Kevin Johnson referred to as Sac-town’s “dirty little secret.” The City Council passed a resolution this week authorizing the Sacramento Housing and Redevelopment Agency to spend $880,000 “to address the immediate short term issues facing over 150 persons and families camping and sleeping in unsafe and unsanitary conditions.” The resolution, a stopgap measure to be sure, provides funding for a temporary increase in shelter beds as well as 68 new permanent housing slots. It enables the city to erase the now infamously visible tent city by giving the community an immediate place to go.

The resolution’s “Rationale for Recommendation” hints at the absurdity of the situation: “Similar to other communities around the world, homelessness continues to be visible throughout the City of Sacramento.” They have a good point: How did little old Sacramento become the symbol of the recession while there are similar communities across the country? Couldn’t Oprah just stay in Chicago and do a piece on the 73,000 homeless there?

Advocates for the Sacramento homeless say a long-term solution might be to make the tent city a self-governed legal community living area, similar to Portland’s Dignity Village. Once legal, the city could build basic infrastructure and local companies that have heretofore feared assisting an unsanctioned community would be permitted to donate amenities.

Check back with Mother Jones for future updates.