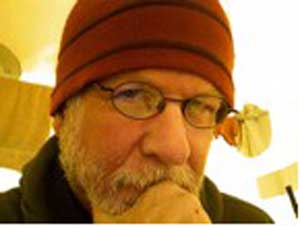 Guest-blogging scientist Ron Naveen is the president of Oceanites, Inc., and the principal investigator of the Antarctic Site Inventory project. In honor of Earth Day, Julia Whitty and I asked him to answer a few questions about his work. He wrote the following dispatch from last week’s Antarctic Treaty Consultative Meeting in Baltimore, MD.

Mother Jones: What are you doing right now?

Here I am, The Penguin Guy, ensconced in the chrome-glass expanse of the Baltimore Convention Center for my second week of this year’s Antarctic Treaty Consultative Meeting. I’ve been going to The Ice for 25 years and to these meetings for 15, keeping an up-close and personal eye on the world’s diplomatic community and whether it’s truly conserving Antarctica for all future generations.

I count penguins. That’s my life’s work. The penguin population changes that my colleagues from The Fagan Lab at the University of Maryland and I detect—and our underlying analyses of how the warming Antarctic Peninsula affects these changes—will provide clues as to what’s going to happen to those of us living in more temperate latitudes, decades down the line. My penguins, as the proverb goes, are “canaries in the cage”—or, more accurately, “canaries in The Ice”—sending us signals we shouldn’t ignore.

So from my perspective, it’s totally necessary to see how my work, and the work of so many other scientists, gets translated, used, and possibly abused in these meetings.

Nearly 400 diplomats, Antarctic program managers, logistics experts, and polar scientists from 47 countries attended this year, probably no more than a third of whom have ever visited Antarctica. All business is done in four official languages—English, Spanish, French, and Russian—with smatterings of Dutch, Norwegian, Swedish, Czech, Portuguese, and other languages filling the air during coffee breaks.

At the State Department in Washington, Secretary of State Hillary Clinton officially and formally opened the Meeting with the heads of Antarctic Treaty Delegations and a potpourri of foreign ministers.

Many of us streamed the Secretary’s opening session on our laptops at the Treaty’s Committee On Environmental Protection meeting here in Baltimore. Clinton created quite a splash with her pitch that, with respect to dealing with climate change, the “US is back!” That US representatives were essentially muzzled for eight years from pursuing climate-related matters in these meetings is astonishing, but hey, that was the last administration and, happily, a new era has dawned. See clips and quotes on The Oceanites Feed site I maintain.

MJ: What interesting discovery from your research do you pull out at cocktail parties to wow non-scientists?

One definite cocktail “stopper” is that you can’t study penguins without becoming an expert in penguin guano! Observing the color of the penguins’ guano clues us to their protein prospects and what’s available in the maritime food market. If their guano is pink, they’re eating krill; if the guano is white, fish and invertebrates are the meal du jour; and if green, they’re fasting or starving, and ejecting stomach bile.

The broader cocktail theme is that everything depends on what I describe as “The Four Vitals” necessary for continued existence, whether you’re a penguin, a human, or a small invertebrate: Is there food to eat? Is there a sufficient home or breeding territory? Can progeny successfully pass genes to the next generation? And is the climate satisfactory? A species’ long-term survival is put at risk if any one of these factors goes out of sync.

The Antarctica Peninsula’s rising temperature and plummeting Adélie penguin population brings these Four Vitals to sharp focus, especially with respect to food and weather. Since 1957, the temperature’s risen by 5° F (2.8° C) year-round, and by 9° F (5° C) in winter. As an example of the downward trend throughout the Peninsula, the Adélies at my Petermann Island study site have declined 60 percent since Louis Gain, the biologist on Jean-Baptiste Charcot’s 2d French Antarctic Expedition, first counted them in 1909.

In recent decades, Peninsula Adélies have shown a proclivity for krill, the small, finger-sized, and protein-laden shrimp I call “The Power Lunch” of the Antarctic. By contrast, from fossil and eggshell isotope records, we know that, eons ago, Peninsula Adélies used to eat both fish and krill. So, now, as my research teams and I see many of our Adélies spewing more and more white guano, perhaps we’re witnessing another shift in Adélie penguin feeding priorities.

MJ: What issues should the public be hearing more about from scientists?

The public should be hearing MORE from scientists, they should be meeting MORE scientists, and scientists generally should be doing MORE and MORE, as a matter of public relations, to “spread the word” about their findings.

I recently heard the statistic that more than 70 percent of the American public has never met a scientist! And, for sure, if one watches cable TV, it’s clear that science is often misrepresented and skewed, and that the scientific method isn’t understood.

We pose and test hypotheses and we don’t publish a whit unless we can demonstrate to our editors, with a 90 percent or 95 percent confidence, that our results are what they are. But what we publish today is, simply, the current news. Tomorrow there will be new theories and hypotheses to test, new results and theories to report, and science will march forward in different and more complicated ways, explaining better how Earth’s biological and physical processes actually work.

A young attendee at a recent penguin talk of mine worried: “Where will the penguins go when all the ice melts?”

As well, we might ask where we humans will go when coastlines are flooded, major cities are underwater, and our Four Vitals are harder to sustain.

The young generation gets it. Unfortunately, the bottlenecks lie with the older, crustier crowd that’s supposed to be translating our work into policy. For example, the science community has done an amazing job laying out what is known about climate change, the 4th Report of the Intergovernmental Panel On Climate Change being the most notable example. The evidence is clear: We humans have caused a spike in temperature that, potentially, will have devastating effects in the years to come. Carbon emissions worldwide must be substantially and radically reduced, else we potentially go the way of dinosaurs.

We shape policy by putting data and papers on the table for the politicians—the best available science, and now it’s time for them to take these products forward constructively. Could be a carbon tax. Could be a stringent cap-and-trade system. And certainly, it means a revised, international climate agreement to take us forward. That’s why Hillary’s remarks opening this Antarctic Treaty Meeting are, and were, so well received. Yes, the US Is Back! And it’s time to move the international community forward on this issue, the major issue of our time, our new 21st Century.

Being at the Antarctic Treaty Meeting is to network among politicians/diplomats, scientists, the environmental community, and user communities (e.g. the tourism industry) to find common ground that will, indeed—and hopefully, conserve Antarctica—perhaps, even, the planet—for future generations.

MJ: What keeps you up at night?

That we’re leaving Earth in worse shape and hastening our and the penguins’ demise. Yes, those beautiful little animals are sending us signals about what we’re doing, in the longer term, to ruin our own home.

In our post-truth, post-factual age of instant gratification, these penguins make me think. They should make all of us think, though humankind, as yet, isn’t primed to absorb the messages they’re sending about an inevitably hotter future. There are no clear, black-and-white solutions averting the potential consequences of global warming and we shouldn’t delude ourselves into thinking we can steer the planet.

But, because we think, because we conjure the future, we can’t help but realize that we can make better choices, though we have no guarantees we can change outcomes.

On the front lines with the penguins, I therefore wonder whether we’ll ever think seriously about generations and changed lifestyles, rather than wobbling about seeking the immediate pleasures of our present, flickering moments of life.

Ron Naveen is the President of Oceanites, Inc., a US-based nonprofit science and education organization, and the principal investigator of the Antarctic Site Inventory project. He is the author of Waiting To Fly (New York, William Morrow, 1999) and The Oceanites Site Guide To The Antarctic Peninsula, 2d Edition (Chevy Chase, Oceanites, 2005), and the lead author/photographer of Wild Ice: Antarctic Journeys (Washington, Smithsonian Press, 1990).