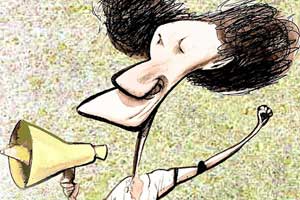 “…Mr. Penn has joined the cast of ‘The Three Stooges,’ a new MGM comedy based on the vintage film shorts of that knockaround trio, Variety reported. Mr. Penn, who recently won his second Academy Award, for playing the title role in Gus Van Sant’s “Milk,” is set to play Larry, the wire-haired, violin-wielding Stooge…” —NY Times.

Sean Penn, King Player
Orson Welles once mentioned that there are actors who are king players. By virtue of their bearing and stature they just naturally play kings. Sean Penn, film royalty for sure, is, by all accounts, preparing for the role of a lifetime: the biopic of Larry Fine, the quiet Stooge, and his relatively unknown life story—as a tireless fighter for social justice.

In this dynamic screenplay, a copy of which I have obtained, Larry, a migrant concert violinist, finds himself in a community of persecuted burlesque comedians and takes up their cause and finds the human rights crusader in himself. As the first president of the Slapstick Workers Action Committee (SWAC) he ultimately drives through major reforms in the industry such as true custard filling to be used in the cream pies, nontoxic red paint for the “do you want your palm read?” sketch, and better access to the strippers’ dressing rooms.

His torrid love affair with Jackie “Moms” Mably in a racially intolerant era ends tragically in a firestorm of condemnation. Now questions about his personal life combined with the coming of the McCarthy era result in increased pressure and persecution for Larry. He and his lieutenants, Curly and Moe Howard, are continually victimized by industry goons, chief among them the feared Harry Cohn, who puts them in films in which they are exposed to punishing, sometimes life-threatening situations.

Aging and nearly blind from years of eye-poking (known in the trade as “Cohning”) and almost bald from years of relentless hair pulling, Larry bravely leads the historic, “Funny Walk on Washington” protest. Fifty thousand comics rally on the steps of the Ronald Reagan Trade Building in Washington, at the foot of the statue of Bonzo the chimp, waving signs and hollering, “It’s not the money, it’s the principle of the thing!” In a barely audible voice he delivers the now famous “I have a terrible headache” speech, calling for better breakaway furniture, gorilla suit ventilation, and research into a safe seltzer bottle. The rally is a huge success but the excitement is too much for Larry. Soon afterward, he passes away—ironically, after years of violence and agony, quietly munching a bagel.

There won’t be a dry eye in the house. Oscar is waiting. You heard it here.