Greetings from our lovely La Quinta rental house where we have just returned from Day 1 of the 2009 Coachella Valley Music and Arts Festival. Our exciting coverage of the first day includes: extra-long lines! Exclusive interviews! Tolerable heat! Old guys! Very old guys! Really quite astoundingly old guys! And, okay, a couple young whippersnappers and their kooky haircuts and bleepy music machines. Click “more” for all the details.

At around 4pm, we enter the venue after securing our super awesome Mother Jones credentials (thanks, Goldenvoice!) and head straight for the backstage, where I’ve managed to finagle interviews with Australian electro duo The Presets and breaks legend Adam Freeland. I’ll get them both cleaned up and you can hear all about it later, but here’s some highlights: I come upon The Presets hanging out barefoot, and when I ask them about the heat they brush it off. “This is nothing,” they say. “It should be hotter.” They’re scheduled in the dance tent at 10pm, directly opposite Sir Paul on the main stage. Is that weird, I wonder? “Not everybody likes Paul McCartney, some people like us,” they assert, correctly. “You didn’t want to see him, yourselves?” I ask. “Nah,” they say, “it’s not like it’s John.” Touché.

Adam Freeland talks up his new record, coming out in June, a high-concept mix of shoegaze fuzz and stomping electro, and we chat about politics, spirituality, and Brave New World. It was a nice little conversation; again, I’m too tired to transcribe it tonight, but you’ll get it soon enough. 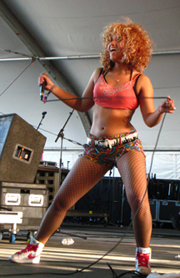 Okay, so on to the music. Reluctantly exiting the comfort of the backstage, we head across the polo fields for Portuguese combo Buraka Som Sistema. They’re basically having a dance party, with a DJ and a live drummer, and the mix segues between their stomping originals and hilariously uncool hits of yesteryear: they lead the crowd in a chant of Benny Benassi’s “Satisfaction,” then the strains of Snap’s “Rhythm is a Dancer” emerge from the speakers, exploding into a syncopated Brazilian beat. The crowd is losing their minds. I’m struck by the inspiring multicultural eclecticism of current dance music; for a moment, I forget where they’re from. 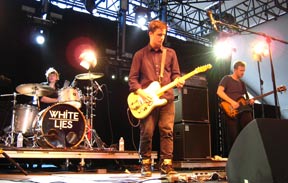 At the tent next door, hotly-tipped British band White Lies are trying to bring some Joy Division-y darkness to the sunniest place on earth. The minor chords ring out beautifully, but lead singer Harry McVeigh opens his mouth and out comes a strangled, off-key warble. His voice is absolutely wrecked, and he’s pushing himself too hard, in a way that’s nearly painful to listen to. I say a silent prayer for his vocal chords and we flee.

Buraka Som Sistema are still going, and their crowd has tripled in size, spilling far out of the back of the tent. It’s as good a time as any for a quick fashion update: the fluorescent trend seems to have died down, mercifully, and now everybody’s in bold primary colors. Lots of red, lots of yellow. And fuzzy headbands! Although did those ever really go out of style?

Back to the main stage and Franz Ferdinand are doing their best. I enjoy their new material, but the mellow strut of “No You Girls” just can’t compare to “Take Me Out” 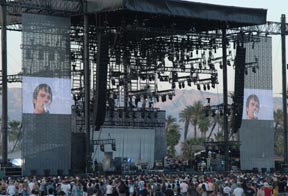 and its towering stomp and shout-along chorus. Lead singer Alex Kapranos is being cheeky: “Are The Beatles playing,” he asks the crowd, “I think I heard the Beatles were playing.” More like Wings, but sure. They jump back and forth between their new and old material, and finally Alex calls the crowd “the most chilled out festival in the whole world,” and I wonder if he thinks that’s a bad thing? 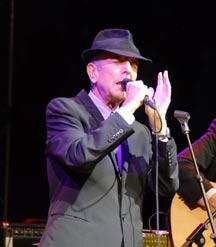 As the sun goes behind the mountains, a huge crowd has assembled at the side stage to see 74-year-old singer Leonard Cohen. I know he’s a legend and has unquestionable hipster cachet, but this is crazy—scrappy-looking kids with punk haircuts are shoving past me to get better spots. Cohen emerges onto the stage with his nicely-dressed band, himself in a black suit, white shirt, cheeky bolo tie, and a little fedora, which he doffs for the crowd. The band starts up, quietly, but the other stages have gone silent out of respect, and the sound is clear as a bell. Cohen drops on one knee to sing the opening bars of “Dance Me to the End of Love.” His voice starts off a little wobbly, and at one point he seems to fumble a line, but in the chorus he dives for the low notes with gusto, his rich basso making the girls scream. As he continues, his confidence only seems to grow, and he picks rhythms in the repeating choruses that intertwine with the backup singers, surprising counterpoints to the straightforward melody already established. He’s on his knees again, and back up again, and I realize I can’t do that now, and I’m half this guy’s age. “I need to see you naked,” he sings, and the crowd screams louder.

Intrepid photographer Kristi emerges from the Cohen photo pit with a star sighting. “I think I saw Jerry Harrison, from Talking Heads,” she says. “He looked pretty old, but he was acting like he was a bigwig, and talking about how Tina and Chris have a home studio now or something.” Exciting! 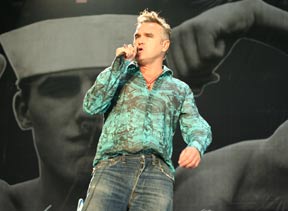 Back on the main stage, delicate piano music announces the imminent arrival of the one and only Morrissey. The 49-year-old singer walks out in a slinky turquoise shirt and coyly, shyly asks, “Can I serenade you?” The crowd seems to think that might be acceptable. He and his band launch into a spirited, rocking version of “This Charming Man,” and it’s just about as good as it did 25 years ago. “Gracias,” he says as it comes to an end, acknowledging his adoring Mexican fan base, many of whom trek in from actual Mexico just a few miles to the south for the show. After a few songs, the wind shifts, and smoke from the barbecues where a variety of meats are cooking blows directly over the VIP area and towards the stage. “I can smell burning flesh,” announces Morrissey, anguished. “I hope it’s human,” he says. They launch into “Some Girls are Bigger Than Others,” and it sounds good, but the Mozzer is not happy: he’s stopping to gag and cough. I’m sympathetic; I mean, I was only a Smiths-inspired vegetarian for a few months in high school, but if you really believe Meat is Murder, then (to steal a stand-up comedy bit from somebody I can’t remember) there’s a holocaust going on just over there in the food court. Poor Moz.

When the new (improved?) Morrissey does Smiths songs, it often sounds almost like a cover; the new band is driving and rough but miss some of the chiming melodic subtleties that made Johnny Marr’s guitar work so hypnotic. But they finish with an aggressive version of “How Soon Is Now,” and it’s superb: slightly more emphatic on the big guitar chords, a little more insistent. The lyrics are as heartrendingly brilliant as they were 23 years ago, a paen to the miniscule details and grand horror of loneliness. Micro: you go to a club, and fail at meeting anybody; macro: I am human, and I need to be loved! Its barely-closeted chant of “How can you say I go about things the wrong way” seems even more relevant today. Plus, that beat. 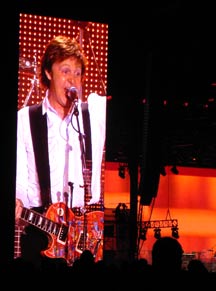 The VIP corral, which has never really been that VIP, is starting to get completely overrun, and this can mean only one thing: a former Beatle is about to grace the main stage with his presence. Something weird is going on, though: the recorded mix playing over the speakers as they set up has some Beatles covers and remixes. Is somebody trying to be funny? They’re playing Diplo’s jumpy remix of “Twist and Shout,” and we’re dumbfounded. What if Paul gets pissed off and doesn’t come out? But no, he apparently doesn’t mind, because he strolls on out at around 10:20pm, kicking off with Wings’ “Jet,” and everybody’s happy. Next up, we get a Beatles number, an energetic version of “Baby, You Can Drive My Car,” and behind them, the screen is displaying footage of… er, cars. This is silly, we decide, and head over to see The Presets in the dance tent. Sorry, Beatles fans. The Aussies are in full swing when we arrive, pink and blue lasers shooting out into the flailing crowd. They’re a band who manages to balance blasting intensity with new wave delicacy; “This Boy’s In Love” has the wistful drama of ABC’s “Poison Arrow,” but “My People” bangs and rocks like Ministry, and in answer to the chorus’ question of “are you with me,” the answer is an emphatic “yes”: someone is waving an Australian flag.

Walking back, Macca is still going, and Coachella has upgraded their main stage video screens so they’re now the entire height of the stage setup, and visible from across the entire festival. “Oh, look at all the lonely people,” he sings, although as we make our way out through the crowd, couples galore are intertwined on the lawn. At this moment, at least, there’s not a lot of loneliness in Indio.

Tune in tomorrow to find out how much hotter it’s going to get, how little M.I.A. will look on that great big stage, what Henry Rollins has to say these days, and to see if the headband trend continues!

All photos by Kristi Highum.