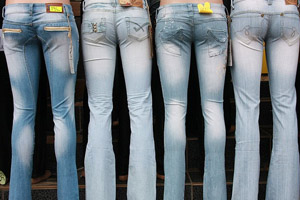 Image from <a href="http://commons.wikimedia.org/wiki/File:Mannequin_with_jeans.jpg">Wikimedia Commons</a> used under a Creative Commons license

George Will is officially trying to be America’s crotchetiest pundit. Fresh from his lame attempt to deny climate change, he has stepped into his time machine, set the dial to 1957, and unleashed a diatribe about the social scourge that is…blue jeans. Seriously. Playing off another denim demonizer in the Wall Street Journal, in yesterday’s column Will tapped into his inner Mr. Blackwell and dissed jeans as “an obnoxious misuse of freedom,” “the infantile uniform of a nation in which entertainment frequently features childlike adults…and cartoons for adults,” “the clerical vestment for the priesthood of all believers in democracy’s catechism of leveling—thou shalt not dress better than society’s most slovenly,” and “the calculated costume of people eager to communicate indifference to appearances.” Wow. I sure hope no one tells him about kids going steady. Or electric guitars.

It’s hard to believe that it has just now occurred to Will that casual comfort is destroying our moral fabric. But a glance at his old columns finds that the preppy pundit has been portraying jeans as signifiers of social unraveling for more than 30 years. Examples after the jump.

1976: Will notes that the ponytail-and-sneakers-sporting head of the National Jogging Association “looks as faded as his jeans.” Damn skinny hippie!

1978: “The Presidency should be clothed in majesty, not denim.” But majesty is so itchy.

1986: Pat Robertson “says he likes to drive his Ford Bronco and wear jeans.” Yet: “He dressed as what he stresses he is, a crackerjack businessman, in a dark blue suit with a paisley handkerchief in his breast pocket.”

1988: Will rides along with undercover cops “dressed in denims, fatigues and other forms of street-corner-casual.” You know, so they look like drug dealers.

1988: Will meets a woman busted in a drug sting: “Her jeans are neatly pressed.”

1989: “Walt Whitman High School in a Washington suburb is a sea of faded denim and raging hormones.” But fear not: “Young Democrats were nowhere to be seen.”

1990: Will meets a surgeon with “crumpled cowboy hat, drooping mustache, big belt buckle and faded jeans” doing “his damnedest to seem like a bumpkin.” Not like that nice Pat Robertson.

1997: Will laments the members of “the lost generation” who “enter the business world and have no clue how to cope (a hint: not jeans) with that deplorable innovation called ‘casual Fridays.'”

1998: “The sea of denim and hormones called high school.” More like a sea of repeated imagery and grievances called a political column.

1999: Will decries “the elongation of youth by those who loiter on the outskirts of adulthood, dressed in jeans and sneakers like prepubescent children.”

2001: “In airport concourses you see them, men wearing jeans and T-shirts and running shoes, holding the hands of small boys dressed similarly.” Pederasts or parents? You decide!