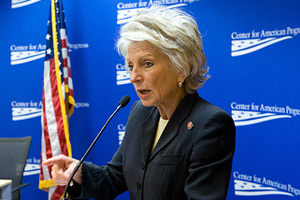 Rep. Jane Harman is fighting back with one helluva gambit.

Late Sunday CQ broke the story–subsequently confirmed by the New York Times–that Harman, a California Democrat, was caught by NSA eavesdroppers telling a suspected Israeli agent that she would do what she could to reduce espionage-related charges filed against AIPAC officials and that this suspected agent promised in return to help her become chair of the House intelligence committee. A Harman spokesperson told CQ, “These claims are an outrageous and recycled canard, and have no basis in fact.” Harman herself refused to say anything.

But on Tuesday afternoon, Harman went on the offensive. She sent a letter to Attorney General Eric Holder asking–make that, demanding–that the Justice Department “release all transcripts and other investigative material involving me in an unredacted form.” She noted, “It is my intention to make this material available to the public.”

In other words, let’s have those NSA tapes, and let’s play them for the world. (CQ and the Times both reported that after Harman’s conversation was intercepted, the FBI began a preliminary investigation, but then-Attorney General Alberto Gonzales shut it down because Harman could help the Bush administration defend its warantless wiretapping program.)

I also urge you to take appropriate steps to investigate possible wiretapping of other Members of Congress and selective leaks of investigative material which can be used for political purposes.  As you know, it is entirely appropriate to converse with advocacy organizations and constituent groups, and I am concerned about a chilling effect on other elected officials who may find themselves in my situation.

That is, she’s requesting an investigation of all wiretapping that might have captured a conversation including a lawmaker. Harman wants to widen the circle of victims.

She must know that there is no way that Holder can release all the information she is seeking in unredacted form, for that would entail identifying the supposed Israeli agent with whom she talked. The Justice Department would at least have to blank out that person’s name. But in general such wiretaps are not disclosed for they can reveal what’s known in the intelligence world as “sources and methods.” A longtime member of the intelligence committee, Harman, as a Democrat, is fully aware of this. After all, she was an ardent defender of the Bush administration’s warantless wiretapping program and was one of several lawmakers who tried to persuade The New York Times not to reveal the existence of that program.

Now, she has become a transparency advocate. Does she believe that the full transcripts of these tapes would show she had said nothing improper? (What if the conversations match the descriptions reported by CQ and the Times?) Or is she counting on Holder to turn down her request, so she can then position herself as the wronged lawmaker who was the target of sneaky and inappropriate snooping and become a champion of openness and accountability?

In either case, this is a bold move. This scandal is significant–especially the portion involving Gonzales. And Harman is trying to up the ante.

UPDATE: Harman went on MSNBC on Tuesday afternoon. She noted she had been “wiretapped” and that this had been “a gross abuse of power.” She reiterated her demand that the Justice Department release any secret recordings of her: “If there are tapes out there, bring it on.” And, she added, “with nothing crossed out.” The lawmaker who had supported the Bush administration’s warantless wiretapping program declared that she now was “very disappointed my country could’ve permitted a gross abuse of power.” She said she was worried that other “innocent” Americans had been eavesdropped upon, adding, “I have a bully pulpit, and I can fight back.”

UPDATE II: As the daily White House press briefing was ending on Tuesday afternoon, I asked press secretary Robert Gibbs if he would take a question on the Harman-AIPAC-Gonzales story. “No, thank you,” he replied.”