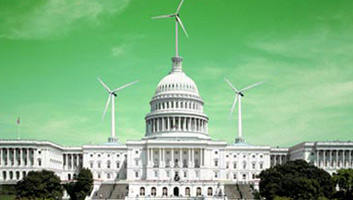 Republican lawmakers who decry climate change legislation as catastrophic for American businesses were left in the lurch on Wednesday afternoon—by reps of American businesses. The split came at a hearing conducted by Rep. Henry Waxman (D-Calif.), chairman of the powerful House energy and commerce committee, who has promised to deliver comprehensive climate change by Memorial Day. In March, he released a sweeping draft bill that received accolades from the environmental community and the Obama administration. Since January, he has held 41 days of hearings with 61 witnesses. This week, in a set of marathon hearings, Waxman will hear from 67 more.

Corporate America certainly sees the train coming down the tracks.

After top Obama administration officials appeared before Waxman’s committee on Wednesday morning, voicing strong support for a bill that would boost renewable energy development, create green jobs, and reduce global warming emissions, a panel of corporate leaders were nearly as enthusiastic—even as committee Republicans blasted the legislation as a prescription for economic disaster.

While Rep. Mike Rogers, a Michigan Republican, assailed the bill as “an assault on the middle class,” Meg McDonald, director of global issues for Alcoa, expressed her company’s “support for comprehensive climate change legislation this year.” Climate change, she said, requires “immediate action” from “every sector of society.”

McDonald was echoed by Charles Holliday, chairman and one-time CEO of DuPont. “I firmly believe this is an opportunity for American industry to reinvent itself,” he said. “We are fundamentally behind this approach.”

Jim Rogers, the CEO of Duke Energy, said, “I recognize that we are part of the problem.” Later, under questioning, he added, “We believe now is the time to act.” David Crane, the CEO of NRG Energy, said that his company has a “moral imperative” to reduce its emissions “substantially.”

With Waxman fast-tracking the climate change bill, these executives recognized that they cannot denounce the legislation and still hope to have any influence in shaping it. Instead, they have chosen to get on board, offering suggestions and mild criticisms. In his testimony, Holliday said he hoped that Congress would keep the cost of its final product “manageable.” McDonald said he’d like to see a cap-and-trade program that is engineered to “minimize the impact on the competitiveness of American business.” Crane argued for a commitment to clean coal.

Rep. Joe Barton (R-Texas), the ranking member of Waxman’s committee, suggested that if anyone wants to experience what life in America would be like after the proposed bill reduces US greenhouse gas emissions to 83 percent below 2005 levels—Waxman’s stated goal—they should go live in a low-emissions Nigeria. “I don’t believe that mankind is the primary cause of climate change,” he said. “I do accept that CO2 levels are rising—I think it’s debatable if that’s a good thing or a bad thing.”

Republicans pushed for clean coal and nuclear power. They insisted that America cannot green itself without China and India committing to do the same, lest those countries poach business from the US. They warned that a cap-and-trade program would increase energy bills, impoverishing the middle class and harming American industry.

Rep. Fred Upton (R-Mich.) repeatedly called cap-and-trade “cap and tax.” As in, “Cap and tax will essentially kick working families while they’re down” and “cap and tax will devastate [the] US economy.” (That second Upton quote was the inch-high headline of a press release handed out by Upton’s staff at the hearing.) In his opening statement, Upton encapsulated the Republican opposition, and highlighted how far his party’s position has diverged from that of the business community. “If the objective is to send manufacturing jobs overseas, destroy the Midwest, mortgage our future, and hand over the keys to our superpower status,” he said, “then I say job well done.”