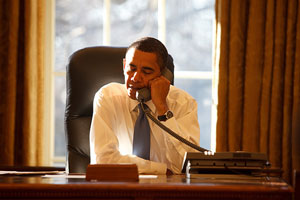 During the White House press conference Wednesday night marking the hundredth day of his historic presidency, Barack Obama was asked not one question about the Afghanistan war or the multiple-trillion-dollar federal bailout of the financial system. He managed to tout his many achievements–passing the $800 billion stimulus package, winning congressional approval of a budget that devotes record amounts to health care and clean energy, initiating the withdrawal of troops in Iraq, signing legislation to boost the number of children covered by health insurance, banning the use of torture–without having to explain or justify perhaps the two most controversial (and perhaps problematic) big-ticket items of his high-wire presidency. Was that just good luck?

These one hundred days have been something a blur–or, at least a policy blur. There is too much to keep track off, too much to juggle. The questions put to Obama covered a wide range of substantial matters. (Nothing on the Air Force One fly-over of New York or the dog, though Jeff Zeleny of The New York Times did ask what about the presidency has “enchanted” Obama.) Should the United States close its border with Mexico to prevent the spread of swine flu. (No, the science does not justify that–but wash your hands often.) Is bankruptcy the best option for Chrysler? (A Fiat-Chrysler deal is still possible, maybe even close to completion.) Can the nuclear arsenal of Pakistan be secured? (Yes.) He handled every issue with confidence, speaking intelligently and at length, even when sidestepping.

He didn’t make a lot of news. Asked about bipartisanship, the president, in a polite manner, essentially said, I’ve tried that, and the Republicans won’t acknowledge I won a historic election. Pressed to say that the Bush administration had sanctioned torture, he would not quite do so. But he noted that waterboarding is torture: “whatever legal rationales were used, it was a mistake.” (He quoted Churchill, who apparently had said of England during World War II, “We don’t torture.”) Obama did send not-so-pleasant messages to abortion rights advocates and Hispanics. Questioned about the Freedom of Choice Act, which would eliminate restrictions on abortion, Obama replied that it was “not my highest legislative priority.” Queried about immigration reform, he said his administration intended to convene a “working group” including key legislators, but signaled immigration reform, too, was not on the top of his to-do list. Perhaps the biggest news of the evening was his statement that he wanted to modify the state secrets privilege, which allows administrations to knock out of court legal cases involving national security issues, such as wiretapping and the treatment of detainees. Attorney General “Eric Holder and Greg Craig, my White House counsel, and others are working on that, as we speak,” he said.

But Obama doesn’t want to make any more news than he has to these days. He has enough on his plate–as he repeatedly reminded the journalists seated before him in the East Room of the White House. And that’s a strategic message for the Obama White House: to proclaim over and over that they are neck-deep in lots of tough stuff. It’s political spin that has the benefit of being true. Asked if he would become involved in determining the products and services offered by auto companies propped up by federal funds, Obama declared that he had no interest in micro-managing GM. He went on:

I want to disabuse people of this notion that somehow we enjoy, you know, meddling in the private sector. If — if you could tell me right now that when I walked into this office, that the banks were humming; the auto — autos were selling; and that all you had to worry about was Iraq, Afghanistan, North Korea, getting health care passed, figuring out how to deal with energy independence, deal with Iran and a pandemic flu, I would take that deal.

And — and — and that’s why I’m always amused when I hear these, you know, criticisms of “Oh, you know, Obama wants to grow government.” No. I would love a nice, lean portfolio to deal with, but that’s not the hand that’s been dealt us.

The reporters laughed. It’s better than crying. For who wants to think about everything that has to be handled by Obama and his crew?

Twice during the evening, the president thanked the American people for “their patience.” And, as he did in his last press conference, he used a familiar maritime metaphor: the ship of state ain’t no speed boat; it’s an ocean liner that can be nudged a few degrees in this or that direction. Obama maintained that what he’s attempting to do these days may not yield results within the coming months. One hundred days? That’s nothing. He explained that he’s aiming for results that would be apparent in 10 or 20 years. (That’s closer to 10,000 days.)

It’s certainly true that Obama has moved darn fast on multiple fronts and has racked up a decent list of progressive accomplishments in these opening months. And he has come up with the right tone to describe these wins: “I’m proud of what we’ve achieved, but I’m not content. I’m pleased with our progress, but I’m not satisfied.” Not too triumphalist, not too modest. But he and everyone else know that this is really just the beginning of a long slog. Health care and climate change–those are daunting challenges for him in Congress (even with Senator Arlen Specter now on his team). The various financial bailouts, the auto bailout, the mortgage relief plan–there’s no telling if any of these hastily constructed schemes are going to work. Afghanistan is a mess, and Pakistan could explode into a geopolitical (and nuclear) nightmare. Obama has plans for both–and smart folks implementing them–but progress on these fronts will be hard to measure and hard to achieve. And the Iraq war isn’t over.

At this media-inflated artificial marker of one hundred days, Obama is scoring well in the polls (and that beats the alternative). He has won the initial fights he has mounted on Capitol Hill. With well-managed trips overseas, he has revived the nation’s image abroad. But Obama is smart enough to realize that in the long run he will indeed need a boatload of patience from the public and that the successes of the past three months pale in comparison to what still must be attempted and (he can only hope) accomplished. And any night he doesn’t have to sell the nitty-gritty of his bailout plans and Afghanistan policy is probably a good night for the successful-so-far but overwhelmed president of the United States.