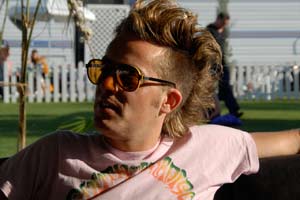 While he may not be a household name, Adam Freeland is a legend in the world of electronic music. He’s one of a handful of producers who can legitimately be credited with, if not wholly inventing, at least bringing to the foreground an entirely new genre: a darker, smarter strain of breakbeat music called “nu skool breaks.” Moreover, his music has often been politically outspoken, and with his eponymous band, he bridges the gap between rock and dance. I talked with him backstage at the Coachella festival about the changing political scene as well as his upcoming album.

How does Coachella compare with UK festivals?

Really? We’re more civilized than in the UK?

I wouldn’t say as a race. (Laughs) But this festival, it’s just perfect weather, everything’s nice, there’s no mud you’ve got to wade through or pissed hooligans throwing beer bottles around.

Right. But you know, production-wise, the sound is good, the talent booking appeals very much to my taste.

Freeland – “We Want Your Soul”

I was just listening to “We Want Your Soul” the other day, probably your biggest hit here in the US, back in 2003-2004. The themes of the song, for the uninitiated, are basically “global capitalism run amok,” plus a Bill Hicks sample that’s kind of about America closing its eyes to its own political evils. But now, suddenly, global capitalism is a shambles, and Barack Obama is our president. Does the song feel like something from another era to you now?

Well, actually I wrote the song in 2000, and now I think it feels more relevant than ever to me. Obviously I think Obama is a lot better than the other option, but he’s not our savior, and I think the track just becomes more relevant as time goes by. It keeps getting remixed and bootlegged, and when people hear it for the first time they go, “wow, yeah, that speaks to me now.” People thought it was a response to September 11th, but I wrote it before September 11th, even.

That’s really surprising to me, because when we started playing it on the radio, back in ’04, it could not have been more relevant to that time, the darkest depths of the Bush era, when speaking out against Bush was considered unpatriotic. Your song came as such a shock, a welcome one but still a shock. But you’re saying it was written even before that.

Yeah. But you’re right, obviously it’s a lighter era now, there’s a great amount of positivity, and I’m not, you know, dissing Obama, he’s a great asset to this country. But there are problems that are institutional, system-wide.

Just when I was starting to feel better…

No, of course, I’m going to be positive, it’s positive, and I think it’s inspirational. The people I surround myself with are going through amazing leaps and bounds creatively, spiritually. You know, it’s almost like I think we should thank George W. Bush. He pushed things so far one way that they inevitably had to swing back the other way. But now I think the most positive thing is that people are realizing that it’s not up to government, it’s up to us.

But you did remix the Daft Punk song with Obama’s name in it. Is that not an endorsement?

I did it for Coachella last year, actually. I felt I couldn’t vote, so at least I’d do what I could.

So you continue to mix politics with your creative work. But how do you balance it out? Are you in danger of becoming the Bono of breakbeat music?

I don’t continually bring politics in, I did two things in 15 years! (Laughs) But I definitely believe that you should use your platform, and I’m never going to write a lyric that’s like, “Take me higher, let’s party.” Everything you do should have a good intention behind it. But, you know, I’ve done plenty of tracks that don’t have lyrics at all, of course. But if I’m going to write a lyric, I’m going to use the platform for something good.

You’ve gone back and forth between being a DJ and working with other musicians in the “Freeland” band. Do you always do both, or is it a matter of switching to the one when the other gets tiring?

Oh I never get tired of DJing. But I appreciate different ways of listening to music, both at a club and at home on your headphones, and I guess having the band allows me to kind of do whatever I want.

Speaking of making new music, what can we expect from you next?

You nailed it, it’s like “Soma” for the modern man.

The album itself is the drug, meant to calm us down and help us cope with the modern world?

I don’t mean to put words in your mouth, I’m just fascinated by the idea.

No, it’s okay, you’re the first journalist who’s actually got it.

I’m just running with it. I could use some Cope right now. Do you have any on you?

So what is the album like? Is it, uh, druggy-sounding music?

No, no, it’s not druggy-sounding. Well, I kind of made three separate albums in the course of making this album. I’m really into shoegazer/drone/desert rock, like Ride, Kyuss, My Bloody Valentine. So I made an album like that, but it felt like it just wasn’t grabbing me, and it was a long way away from what I usually do. And then I made a total electronic dance floor record, but, you know, I didn’t want to just do that, so I ended up putting them together, combining them, and now the album is kind of like Loveless meets Nite Versions.

That sounds spectacular, I have to say.

That was my intention, whether it came out like that I’ll have to leave to you to decide.

You think it’s going to be a hit?

Who knows? I got nominated for one before.

For that remix of…

Are you going to release the whole album on a pay-what-you-want basis like Girl Talk and Radiohead?

Ummm… We haven’t figured that out yet. I don’t think we’re going to give the album away for free. But then we’ll put together the live show, and I really want to do something amazing, you know, like the Roger Waters show here at Coachella last year. The detail, the sound, every single thing was so well done, he really stepped it up. I’d just love to create a live show that’s legendary, on that level. I think we’ve got a really tight band so I think we can do it. It’s just going to take a lot of hard work.

Freeland’s new album, Cope TM, comes out in June on Marine Parade. Download the first single, “Under Control,” below or at freeland.fm.