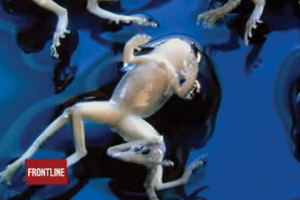 More than 35 years ago, Congress enacted the legislation now known as the Clean Water Act. The law had been around since its first incarnation—the Federal Water Pollution Control Act—in the Truman era, but the bill Congress passed in 1972 was a sweeping overhaul of the original act. The Clean Water Act set limits on the amount of pollutants industries and cities could discharge and gave the Environmental Protection Agency the power to sue and penalize polluters that exceeded those limits.

But after Ronald Reagan came to Washington, his administration established a program of voluntary compliance with Clean Water Act standards. That program is the launching point for Frontline’s documentary Poisoned Waters (airing Tuesday at 9 pm on PBS), which examines widespread pollution in two US waterways—Chesapeake Bay and Puget Sound—caused by 25 years of unregulated toxic industrial, agricultural and municipal runoff.

Narrator Hendrick Smith shows us the first striking snapshot of aquatic pollution when he joins one environmental activist on a flyover of a Purdue chicken farm in Maryland: Behind each shed of 40,000 chickens, we see huge brown splotches of phosphorus- and nitrogen-heavy chicken manure. Rainwater eventually causes the chicken waste to leach in to one of the streams that make up the Chesapeake’s massive aquatic footprint. As Smith shows, chicken waste dumped into a tributary in Richmond could eventually end up in your drinking water in Baltimore.

Poisoned Waters is filled with those types of images: Frogs with six legs, once-male bass in West Virginia rivers that have morphed into females, and an underwater waste pipe spewing a constant noxious cloud of brown goop into Puget Sound. Smith and his crew use those images as segues to the documentary’s crucial point: Any pollution that kills aquatic life can harm humans. Finding dead fish floating belly-up on the surface of a river is a bad omen for humans drinking its water.

While deregulation emerges as the main culprit for the nation’s polluted waterways, Smith implicates another group of culpable offenders—us. We’ve spent years creating new chemicals for everything from pesticides to household cleaners, all without pushing for up-to-date technology to purify our water of these toxins. Smith talks to one team of scientists who test for toxins in the Potomac River, both before and after its water is run through a treatment plant just north of Washington, DC. The plant’s outdated filters only remove a third of the pollutants in the Potomac.

So what can we do about it? Poisoned Waters concludes the impetus to clean up aquatic pollution—and halt it in the future—carries the most force when it comes from the electorate. But a pure environmental argument doesn’t always resonate with the voters. As Chris Miller, an activist with the Virginia-based Piedmont Environmental Council, says, “Getting up in front of a crowd and saying, ‘The bay’s in tough shape, and the pollution’s getting worse, and we’ve gotta change our lifestyles to save it,’ really doesn’t get you anywhere.” And with three-quarters of the US population living near waterways, hundreds of millions of Americans are affected by unregulated pollution. The trick is getting us all to care.

Note: I wasn’t aware PBS would be advertising this program on our site until after I watched and reviewed Poisoned Waters. —S.A.