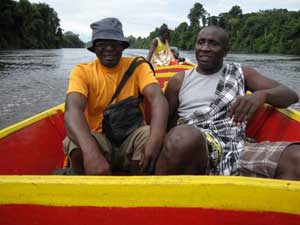 Cpt. Wanze Eduards and Hugo Jabini in boat on Suriname River. Photo by Will Parrinello

Want some Earth Day inspiration that has nothing to do with Susan Boyle? Check out the seven Goldman Environmental Prize winners this year. From Indonesia to Appalachia, shipping to logging, these “Green Nobel” winners all have great heart. The one I spoke with, Hugo Jabine, comes from the forests of Suriname, where the Maroon community founded by freed African slaves has lived for 300 years. Goldman award materials say Jabine and his co-recipient Wanze Eduards “successfully organized their communities against logging on their traditional lands, ultimately leading to a landmark ruling for indigenous and tribal peoples throughout the Americas to control resource exploitation in their territories.”

Here’s how he tells it:

My name is Hugo Jabine. I come from Suriname, a small country in the North part of South America, between British Guyana and French Guyana. We are Maroon, living in the forest of Suriname. The Dutch colonists took our ancestors from Africa as slaves, but they moved away from the plantations to the forest and set up their own communities. We lived in the forest, with the forest, and made it our home, for 300 years. Then Suriname’s government gave concessions to logging companies from China, Malaysia, Indonesia, who came in our region and cut down the trees, destroyed the forests, polluted the creeks, destroyed farming. That was the reason we stood up and organized to fight against these violations. We filed a case to the Inter-American Commission on Human Rights to force the Suriname government to give legal recognition of our land rights. In 2007, the Inter-American court found the Suriname had violated our land rights, and forced them to recognize our collective ownership and demarcate our land, give us title. Let us control our land in our way according to our culture.

I think that Americans must know that there are tribal people who live in peace in the forest, with the forest, and they conserve the forest.

After I go back to my country we will make sure that the Suriname government implements the judgment in the right way, and we’ll work to manage our land in a sustainable way, and work with NGOs to establish our own protected area where we can keep contributions for the world and teach our people about their contributions to nature.

Read a more detailed account of Jabine’s work here. Then check out the 3-D Google Earth tour (narrated by Robert Redford) of Jabine’s story and that of the other prize winners.