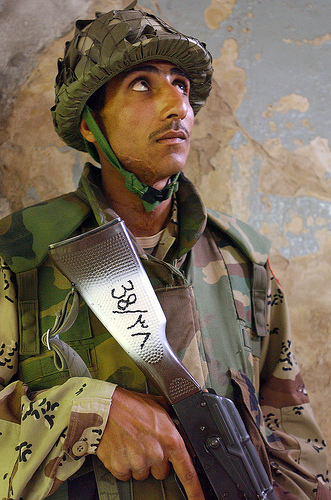 That was the question discussed by three Iraq experts on a press call Friday morning hosted by the National Security Network. In compliance with the Status of Forces Agreement struck with the Iraqi government in November 2008, US troops will complete their withdrawal from Iraq’s cities by Tuesday, thus (hopefully?) ending an era of US involvement in the country–and, of course, inaugurating a new one. Come next week, Iraqi soldiers and police will take over all active patrols in the country’s major urban centers. They’ve been training for the job for years. And though we all remember reports from a few years ago of Iraqi units that were nothing more than paper phantoms, by all accounts the security forces have more recently made great strides.

But while Iraqi units have been trained and equipped, one of the more pressing questions is whether they have the logistical capacity to maintain operations without extensive US assistance. “Everybody claims to be a tactician, [but] professionals are logisticians,” says Paul Eaton, a former Army major general who led the training of Iraqi forces after the 2003 invasion. “When American soldiers pull out of the urban concentrations, will there be a logistical tail to support the Iraqi soldiers, so [they] will have faith in the chain of command that they’re gonna be resupplied and, if wounded or hurt, that they’ll be evacuated? That ‘if’ I cannot answer. We will see it develop.”

Jonathan Morgenstein, a former Marine captain who served as a civil affairs officer in Ramadi and was more recently an embedded trainer in the Iraqi Army in Anbar province, agrees that the logistical question remains open. But he points out that “this was an Iraqi decision for the Americans to really pull out of the cities. It’s what the Iraqis want. It means the Iraqis are taking this situation onto themselves more than we are putting it onto them.” Most of the soldiers he encountered recently in Anbar are looking forward to taking control, Morgenstein notes. “They feel like they have it in hand, that they can handle the situation from now on… and that frankly they don’t really need the Americans giving them day-to-day support.” But just as logistics are an unknown factor in how things will shake out, so is corruption, particularly among Iraqi police forces, he says. “Somewhere along the line, money or actual equipment might disappear and it might end up on the black market, so that impedes the ability to logistically support your units… and the moral belief of the soldier in his chain of command.”