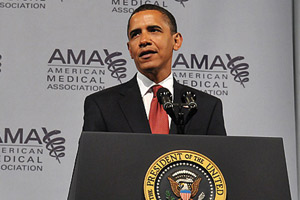 As a rule, people don’t boo Barack Obama, the first rock star president. But on Monday, that’s exactly what happened. On a charm offensive in support of his health care reform efforts, Obama addressed the American Medical Association, the nation’s largest physician lobby. The doctors in the audience booed him for revealing that he didn’t support the group’s pet cause—caps on damages in medical malpractice lawsuits. Nonetheless, he did win some applause by adopting the doctors’ language and referring to the “defensive medicine” that is supposedly driving up health care costs.

In a carefully parsed speech, he said, “Some doctors may feel the need to order more tests and treatments to avoid being legally vulnerable. That’s a real issue. And while I’m not advocating caps on malpractice awards which I believe can be unfair to people who’ve been wrongfully harmed, I do think we need to explore a range of ideas about how to put patient safety first, let doctors focus on practicing medicine, and encourage broader use of evidence-based guidelines. That’s how we can scale back the excessive defensive medicine reinforcing our current system of more treatment rather than better care.”

It was a cagey move. In throwing the docs a bone, Obama embraced one of their most cherished arguments: that “defensive medicine” is driving up health care costs. But this bone doesn’t have much meat on it. Defensive medicine is doctors’ favorite anti-lawsuit argument. It goes something like this: The mere threat of malpractice lawsuits drives physicians to overprescribe expensive tests and procedures, ergo, making it harder for malpractice victims to sue would bring down health care costs.

I’ve been looking at this issue for years, as have many government agencies. Like them, I’ve basically concluded that defensive medicine is a myth. Think of it this way: How many Americans are really out there complaining that they’ve received too much health care? More common are stories like this one about a case that went to the Texas Supreme Court in 2007. The plaintiff, Sharon Boyd, 57, made four different visits over 16 months to three different doctors, complaining of rectal bleeding and constipation. Not one of them ordered a single diagnostic test, not even a colonoscopy, which is recommended for everyone over 50, bleeding or not. Finally, three years after her initial complaints, Boyd demanded a colonoscopy. Turns out she had stage 4 colon cancer. She died not long after finding a lawyer.

There are whole legal practices devoted to little but litigating missed cancer diagnoses like these. Reading their files is a harrowing experience. Most people are lucky to get their insurance to pay for a routine trip to the doctor, much less a battery of unnecessary tests. As the Government Accountability Office and others have pointed out, doctors usually order unnecessary tests only when they can benefit financially. That’s one reason Medicare spending on imaging services like MRIs and CT scans doubled between 2000 and 2006, according to the GAO.

Obama must know all this. His embrace of “defensive medicine” suggests he really wants the AMA to get on board with his reform plans. Still, no amount of bone-throwing is likely to persuade the AMA to support meaningful health care reform. Hillary Clinton tried this same anti-lawsuit gambit back in the early 1990s and we all know how well that worked out.  Obama’s situation is probably even more hopeless because he’s making promises that the AMA must know he can’t keep. Here’s why: As a constitutional law professor, Obama knows well that most of the legal measures doctors support to reduce “defensive medicine,” including the much vaunted “health court” proposals, are fundamentally unconstitutional. They tend to violate people’s Seventh Amendment rights to a jury trial, among other things. Moreover, with Democrats running the House and Senate, restrictions on medical malpractice lawsuits are most likely dead on arrival.

It’s not just trial lawyer money that will doom the effort. Trial lawyers don’t have nearly as much money as doctors and insurance companies, for one thing. But also, there are some powerful lawyers in Congress who will put up a big fight on this one on principle. Among them: Republican senator and onetime trial lawyer Lindsey Graham from South Carolina, who voted against malpractice reform bills in 2003 and 2004. Sen. Arlen Specter (D-Pa.), another former trial lawyer, has also been a reliable opponent of lawsuit restrictions. Obama’s own vice president might pose the biggest obstacle to any attempt to limit malpractice suits. Joe Biden was a trial lawyer himself (as is his brother and son, Beau), and the biggest donors during his political career have been fellow plaintiff attorneys. Biden has never once supported a tort reform bill in Congress; it seems unlikely he would start supporting such proposals now.

Even if Obama could surmount the opposition in his own party to push through some sort of legal protections for bad doctors, it’s still extremely unlikely that he’ll win over the AMA. The group is one of the nation’s most retrograde political institutions. As Kevin Drum has pointed out, the AMA adamantly opposed the creation of the same Medicare system they now argue should pay doctors more money. In the 1930s, the AMA tried to ban its members from working in fledgling HMOs created during the Depression to try to provide health care to the legions of unemployed. The organization ended up convicted of violating the Sherman Anti-Trust Act.

The AMA has locked arms with such lobbies as the tobacco industry, earning large sums for running cigarette ads in its prestigious medical journal for decades. During the malpractice insurance “crisis” of the early 2000s, the AMA provided political cover to poorly managed insurance companies that lost millions in the stock market on Enron and other investments and then tried to make up the difference by jacking up doctors’ malpractice premiums. The AMA lobbied for lawsuit restrictions that generally do little for doctors but much for the bottom lines of insurance companies. In 2003, Donald Palmisano, the president-elect of the AMA who encouraged President George W. Bush to “get out the grassroots” to pass restrictions on lawsuits, was actually the founder of a malpractice insurance company and on the board of another big malpractice insurer.

Obama’s attempt to woo these people by embracing one of their bogus arguments seems a bit pointless. The AMA may be the loudest voice of the medical profession, but it doesn’t represent most doctors. Recent estimates suggest that only 15 percent of the nation’s practicing doctors are even members of the group, down significantly from where it was during the last big health care fight. Not only do its members rely on Medicare for income, but a large percentage of them are also old enough to be covered by it. In the end, the AMA doctors may come to regret booing the most popular president in recent memory. It could be that Obama can reform health care without them.