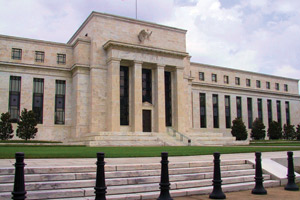 Photo courtesy of wikimedia used under a <a href="http://en.wikipedia.org/wiki/File:Federal_Reserve.jpg" target="blank">Creative Commons</a> license.

On Wednesday, after weeks of the requisite press leaks and prefabricated spin, the Obama administration released details of its new “rules of the road” financial regulations, which had been billed as the most sweeping overhaul of the financial system since the Great Depression.

Obama, alas, is no FDR. Roosevelt’s New Deal reforms included the Glass-Steagall Act of 1933, which split complex financial institutions into commercial banks (for consumers) and investment banks (for speculators). This enabled government to safeguard the boring, conventional activities of consumer banking without insuring the dice-rolls of high-risk investors. His reforms also opened the banking sector to independent audits to ensure financial soundness—as opposed to just taking the banks’ word for it, as Treasury Secretary Tim Geithner’s recent stress tests effectively did—and established the Home Owners’ Loan Corporation, which helped people at risk of foreclosure cover their mortgages.

The administration’s new 88-page white paper, titled “Financial Regulatory Reform: A New Foundation,” focuses more on alterations than true reform. Some of them are useful, like requiring lenders to keep a stake in the loans they make, and requiring banks to keep adequate capital on hand. The bill would also regulate a portion of the problematic financial instruments known as over-the-counter derivatives. But other aspects are ill advised, like giving the Federal Reserve more oversight, creating an uber-regulator, and allowing Wall Street’s biggest players to keep their hands in every pot imaginable.

Let’s break it down:

The Good
Obama’s plan consolidates certain regulatory functions and imposes restrictions on certain securities. The Office of Thrift Supervision, which monitors thrifts and S&Ls, including AIG—which was misclassified as an S&L even though it operated an insurance company hedge fund—gets the axe. The duties of OTS and another regulatory body, Office of the Comptroller of the Currency, would go to a new agency called the National Bank Supervisor. Now OTS was an easy target, since few who aren’t employed there really care one way or the other. Still, it’ll be a while before we know whether the move really does anything to streamline the regulatory system.

A stronger provision of the Obama proposal gives the Federal Deposit Insurance Corporation wider authority over banks on the brink of failure. So far, the FDIC has done an excellent job resolving failed banks—selling their assets, renegotiating loans with consumers—and bringing them back to health. So giving it additional responsibility makes sense.

Obama’s plan would also establish the Consumer Financial Protection Agency to oversee mortgage- and other credit-related consumer products, and to enforce the Community Reinvestment Act, which encourages banks to make loans in disadvantaged areas. If the CFPA is given the enforcement and indictment power of the Securities and Exchange Commission, and actually uses it (unlike the SEC), then so much the better.

Other winners include a proposal to weaken the influence of credit ratings by agencies like Moody’s and Standard & Poor’s, which helped drive the crisis by downplaying the risk of subprime and other risky securities. Then there’s Team Obama’s requirement that lenders keep 5 percent of their loan risk on the books rather than selling all of it to Wall Street—a move that will make lenders think twice before handing half a million bucks to some McDonald’s cashier, but one that Wall Street is already fighting.

Another nice idea, though it doesn’t stand a snowball’s chance in hell, calls for bankers in these complex securities deals to be paid based on the long-term performance of the product, as opposed to simply taking their cut as soon as the deal closes. In practice, though, this would be a bureaucratic nightmare—policing it would require almost as many regulators as there were bankers involved.

The Bad
To oversee big insurers, the Obama team wants to create an Office of National Insurance within the Treasury Department. Now, if it weren’t for the fact that many insurance companies, notably AIG, had themselves classified as S&Ls, while others are housed within the bank holding company complexes of firms like Citigroup—thanks to the repeal of Glass-Steagall in 1999—this plan might even work. But this isn’t the case, and since the plan makes no mention of reconstructing the financial system, this part of it is unlikely to help matters.

On the subject of derivatives, the clear winner is Wall Street. “We propose to bring the markets for all OTC [over-the-counter, meaning they are traded between private parties] derivatives and asset-backed securities into a coherent and coordinated regulatory framework,” notes the Obama white paper.

If you didn’t quite get that, neither does anybody else. The paper gives no hints about how this would be accomplished, the constraints of this so-called framework, or the reporting requirements. And by noting that the derivatives in question include “all standardized OTC derivative transactions,” the white paper implies that the derivatives deemed too complex to be traded in this more generic fashion can still trade off-exchange—a loophole coveted by the banks that lets them continue to create convoluted securities with little scrutiny. (Mojo’s Nick Baumann has more on this, as does Rachel Morris: Cap-and-trade derivatives, anyone?)

Obama blames the financial crisis on a “culture of irresponsibility,” but the absolute worst of his new proposals is to give the Fed more authority. That’s like rewarding the king of this irresponsible culture, or at least its chief banker and liquidity provider, with a larger kingdom.

The biggest bank bailouts of all went to Citigroup, which grabbed $388 billion in public assistance, and Bank of America, which scored $220 billion—as much as AIG. And who was their regulator? The Fed.

So the OTS gets annihilated for its failure vis-à-vis AIG, but the Fed gets rewarded. Why? Because the Fed, while not a fully public agency, is the banking system. During the past 15 months, it has amassed $7.9 trillion worth of facilities and other entities through which it has lavished cheap loans in return for questionable collateral from banks. It has kept the true nature of these transactions a secret despite numerous FOIA requests. And it has actively promoted the creation of bigger financial institutions in a chaotic environment, rather than putting the brakes on the creation of these giants.

Yet under Obama’s plan, the Fed would be crowned as the supreme systemic-risk regulator, supervising the largest and most interconnected firms. This is plain wrong. It rewards an entity that neglected its regulatory obligations to begin with, that paid unprecedented sums to correct its mistakes, that never exercised its ability to contain the size of banks—blessing rather than questioning those that would become “too big to fail” (or to regulate)—and that shunned transparency. This is not the way to stabilize and provide necessary responsibility to the system.

Rather than regulate a complicated industry by creating more regulatory layers and giving more power to the Fed—which deserves its own stringent audit—a more lasting solution would be to restructure the banking industry itself. The smart move would be to divide banks once again into separate consumer and investment entities. This would make them far easier to regulate, and alleviate the need for government to play catch-up—and subsidize ever larger, more complex firms.

Yet as long as the Gramm-Leach-Bliley Act of 1999 (which repealed Glass-Steagall, and then some) remains intact, and as long as the Fed serves as marriage counselor and financier for the banks, then investment houses, commercial banks, S&Ls, and insurers can and will continue to merge operations. That fact alone renders it extremely difficult to monitor and control our banking system, or to achieve the stability Obama promises—and the rest of us seek.