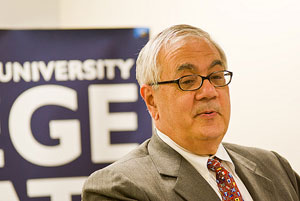 Finally some good news on the torture photos: top liberal Democrats in the House, led by Rep. Barney Frank (D-Mass.)* are blocking the awful, Obama-supported Detainee Photographic Records Protection Act of 2009. The “records protection” law would allow the administration to unilaterally block the release of any photos of detainee treatment that it didn’t want publicized, bypassing the Freedom of Information Act. The bill, sponsored by Sen. Lindsey Graham (R-S.C.) and the odious Joe Lieberman (I-Conn.), passed the Senate by a voice vote earlier this week and was attached to the bill providing supplemental funding for the wars in Iraq and Afghanistan. Why do the House liberals have any leverage? Glenn Greenwald explains:

The votes of liberal House Democrats actually matter (for once) because most House Republicans are refusing to support the overall supplemental bill due to their objections to a provision for $5 billion in funding to increase the [International Monetary Fund’s] lending capacity.  To pass the supplemental spending bill, House leaders need the votes of numerous House Democrats who are currently refusing to vote for anything that contains the photo suppression amendment.

The photo suppression bill is an abomination that is reminiscent of the worst Bush-era excesses. It gives the executive branch the power to withhold an entire category of information from public scrutiny without any review. This law is Example A of the theory of the Presidency that says citizens should just trust the benevolent executive to do the right thing. Even in you oppose releasing some of the photos, I don’t see why you would want to give the White House the power to unilaterally decide what’s best. It says a lot about the Congress that members are willing to give Obama this kind of power. It says a lot about Obama that he supports this bill. Thank God for Barney Frank.House liberals.

*Update/Correction: Ok, this requires some more explanation. Frank actually voted for the supplemental the second time it came up, but he told Jane Hamsher this: “I told them [the administration] that they have no chance of passing [the war supplemental authorization] if the pictures are in it. There are many Democrats who are very upset about that.” It turns out he was right: the Lieberman-Graham bill was not attached to the final conference report. Sorry for the confusion.