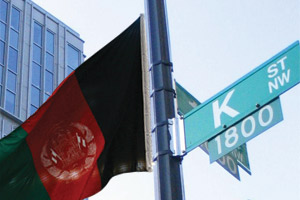 Help! I’m being outgunned on K Street! That’s the message Afghanistan’s ambassador to the United States is sending home, according to an internal government memo (PDF) obtained by Mother Jones. His complaint signals that Kabul’s man in Washington has learned a fundamental lesson about influence in the nation’s capital: With few paid lobbyists to push Afghanistan’s agenda, the void is being filled by other regional players, like Pakistan and India, both of which spend millions of dollars each year to ensure that they’re heard in Washington’s corridors of power.

In his memo to Afghanistan’s finance minister, Omar Zakhiwal, which is dated April 21 and marked “confidential,” Ambassador Said Tayeb Jawad surveys the competition. Pakistan, he writes, employs nine American lobbying firms, including two “that alone represent and promote President Asif Ali Zardari’s interests in Washington.” According to the ambassador’s missive, these include Locke Lord Strategies-LP, which since May 2008 has been on retainer from the Pakistan government for more than $100,000 per month, and JWT Asiatic and Hill & Knowlton, which together collect a monthly payment exceeding $100,000. All told, according to Jawad’s estimate, Islamabad spent at least $3 million on Washington lobbyists in 2008 alone. Explaining how he has been outspent, he cites a January 2009 report in the Washington Post stating that India’s lobbyists successfully persuaded the Obama administration to remove Kashmir from Richard Holbrooke’s portfolio as the White House’s special adviser on Pakistan and Afghanistan. In hopes his government might learn from the example, Jawad suggests that Kabul needs “to give serious consideration to allocating financial resources an on annual basis so that—like Pakistan and India and so many other countries—we are also able to effect pro-Afghanistan policy and legislation in Washington.”

After I obtained a copy of the memo, I met with Jawad at the embassy, a redbrick mansion in Washington’s posh Kalorama neighborhood. The ambassador, in a neatly pressed blue suit and yellow-striped shirt, welcomed me into his second-floor office, where we sat around a small table and drank Afghan mint tea. Had his plea for more resources had any effect, I asked? No, he said, adding that Kabul “doesn’t know exactly how Washington operates…They ask, ‘Is this legal, to buy influence?’ Yes, everybody’s doing it!” Jawad told me that he doesn’t even have enough money to properly entertain embassy guests. “People like you,” he said. “If you are interested, I can give you a book on Afghanistan, but nothing else.”

The government of Afghanistan is not completely naive when it comes to the Washington power game. In March 2002, for example, the country’s provisional government hired DC firms Verner, Liipfert, Bernhard, McPherson and Hand and DLA Piper to represent its interests. Both initially agreed to work pro bono. Among the early tasks was to relocate Afghanistan’s diplomatic presence from a small rented office in downtown Washington to the embassy’s former and current refurbished home, which during the Taliban years had fallen into extreme disrepair. It was “literally a shambles,” recalls DLA Piper’s Lawrence Levinson, with sensitive government papers strewn over a waterlogged floor in the embassy’s basement safe room. Rebuilding the country’s diplomatic know-how also required some remedial training, including a “Washington tutorial” presented to Ishaq Shahryar, Afghanistan’s US ambassador from 2002 to 2003, on “how you get things done in town,” says Levinson. The relationship grew from there and continues today. In July 2007, DLA Piper finally negotiated a small monthly retainer of $10,000, but even that has been a stretch for the embassy. “Soon I’m not going to be able to get it,” Jawad told me. “There’s no money…The budget of the embassy is pre-9/11. There was never any substantive increase.”

Why hasn’t Kabul spent more on K Street? According to Mahmood Karzai, eldest brother of Afghan president Hamid Karzai, the Afghan government lacks the savvy.  “Unfortunately, the Afghan government is not clever enough to hire lobbyists,” he explained. Meanwhile, he said, his brother’s opponents have spent millions in Washington aimed at destabilizing Afghanistan and undermining the Karzai family. Karzai claims that media stories repeating that his brother, Ahmed Wali Karzai, is a drug smuggler have been ginned up by DC operatives working for enemies of Afghanistan. But he doesn’t say which lobbyists and offers no proof of his charge.

As for Jawad, when asked how he feels about Mahmood Karzai’s accusations, he seemed uncomfortable discussing it, but deferred to the president’s brother. “He is inside Afghanistan, so he knows these things better than I do,” he said. “Lobbying is not limited to the embassies. Different entities have their own lobbyists—political parties and individual institutions. It is not unusual.” But as for whether Pakistan’s army of Washington lobbyists is working to destabilize the Karzai government, “I don’t have the details of what they do,” Jawad said. “That is confidential information between the attorneys and their clients.”

Correction appended: This story states that Afghanistan has been represented by two lobbying firms: Verner, Liipfert, Bernhard, McPherson and Hand and DLA Piper. In fact, Verner Liipfert was the name of the firm in 2002 before it merged with DLA Piper. Furthermore, a representative from Hill & Knowlton says that Ambassador Jawad got it wrong, claiming that the firm has not represented Pakistan since the earthquake there in 2005.