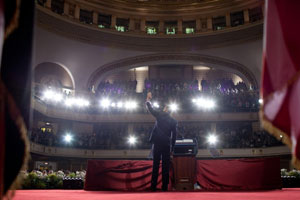 On Thursday morning, President Barack Obama decided to see what happened when America and the Muslim world stopped being polite and started getting real. In an hour-long speech in Cairo, Egypt, Obama bluntly discussed seven of the most vexing problems facing the United States’ relationship with Muslims. It was a veritable “house meeting”—Real World: Cairo?—for two forces that have frequently found themselves  at odds in recent years. Calling for “a new beginning” to the relationship, Obama began with a promise of honesty:

“As the Holy Koran tells us,” Obama said, “‘be conscious of God and speak always the truth.’ That is what I will try to do—to speak the truth as best I can, humbled by the task before us, and firm in my belief that the interests we share as human beings are far more powerful than the forces that drive us apart.” Here, in my mind, are the nine hardest truths Obama offered during his speech:

Hard for Israel: “it is also undeniable that the Palestinian people—Muslims and Christians—have suffered in pursuit of a homeland… They endure the daily humiliations—large and small—that come with occupation. So let there be no doubt: the situation for the Palestinian people is intolerable. America will not turn our backs on the legitimate Palestinian aspiration for dignity, opportunity, and a state of their own.” “The United States does not accept the legitimacy of continued Israeli settlements,” and “Israelis must acknowledge that just as Israel’s right to exist cannot be denied, neither can Palestine’s.”

Hard for Hamas: “To play a role in fulfilling Palestinian aspirations, and to unify the Palestinian people, Hamas must put an end to violence, recognize past agreements, and recognize Israel’s right to exist.”; Violence of the sort perpetrated by Palestinians against Israelis is “not how moral authority is claimed; that is how it is surrendered.”

Hard for Dick Cheney: “I have unequivocally prohibited the use of torture by the United States, and I have ordered the prison at Guantanamo Bay closed by early next year.”/”No system of government can or should be imposed upon one nation by any other.”

Hard for 9/11 Truthers and Muslims Who Think The Jews Did ItTM: “I am aware that some question or justify the events of 9/11. But let us be clear: Al Qaeda killed nearly 3,000 people on that day. The victims were innocent men, women, and children from America and many other nations who had done nothing to harm anybody. And yet Al Qaeda chose to ruthlessly murder these people, claimed credit for the attack, and even now states their determination to kill on a massive scale. They have affiliates in many countries and are trying to expand their reach. These are not opinions to be debated; these are facts to be dealt with.”

Hard for Mahmoud Ahmadinejad and other Holocaust Deniers: Around the world, the Jewish people were persecuted for centuries, and anti-Semitism in Europe culminated in an unprecedented Holocaust. Tomorrow, I will visit Buchenwald, which was part of a network of camps where Jews were enslaved, tortured, shot, and gassed to death by the Third Reich. Six million Jews were killed—more than the entire Jewish population of Israel today. Denying that fact is baseless, ignorant, and hateful. Threatening Israel with destruction—or repeating vile stereotypes about Jews—is deeply wrong, and only serves to evoke in the minds of Israelis this most painful of memories while preventing the peace that the people of this region deserve.

Hard for Every Arab Leader: “I do have an unyielding belief that all people yearn for certain things: the ability to speak your mind and have a say in how you are governed; confidence in the rule of law and the equal administration of justice; government that is transparent and doesn’t steal from the people; the freedom to live as you choose. Those are not just American ideas, they are human rights, and that is why we will support them everywhere.”

Hard for Muslims who Reject Religious Pluralism: “Among some Muslims, there is a disturbing tendency to measure one’s own faith by the rejection of another’s. The richness of religious diversity must be upheld—whether it is for Maronites in Lebanon or the Copts in Egypt. And fault lines must be closed among Muslims as well, as the divisions between Sunni and Shia have led to tragic violence, particularly in Iraq.”

Hard for Muslims Who Reject Equal Rights for Women: “Our daughters can contribute just as much to society as our sons, and our common prosperity will be advanced by allowing all humanity—men and women—to reach their full potential. I do not believe that women must make the same choices as men in order to be equal, and I respect those women who choose to live their lives in traditional roles. But it should be their choice.”

Hard for Anti-Muslim Bigots in America: “Islam has always been a part of America’s story. The first nation to recognize my country was Morocco. In signing the Treaty of Tripoli in 1796, our second President John Adams wrote, ‘The United States has in itself no character of enmity against the laws, religion or tranquility of Muslims.’ And since our founding, American Muslims have enriched the United States. They have fought in our wars, served in government, stood for civil rights, started businesses, taught at our Universities, excelled in our sports arenas, won Nobel Prizes, built our tallest building, and lit the Olympic Torch. And when the first Muslim-American was recently elected to Congress, he took the oath to defend our Constitution using the same Holy Koran that one of our Founding Fathers—Thomas Jefferson—kept in his personal library.”