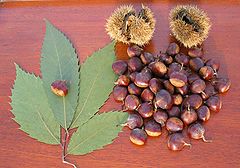 American chestnut trees had always thrived in forests, towns, and farmland in the eastern US—until the early part of the last century, when a chestnut blight, thought to have come from the far east, all but obliterated the species.

But the tree still looms large in the American imagination, and for good reason: It’s beautiful, towering and leafy. It also grows quickly, and its durable wood makes good floors, tables, and fences. For years, groups like American Chestnut Cooperators’ Foundation have been working to revive the American chestnut. Now, it looks like a research team at Purdue University might have done it by creating a hybrid:

New efforts to hybridize remaining American chestnuts with blight-resistant Chinese chestnuts have resulted in a species that is about 94 percent American chestnut with the protection found in the Chinese species. Jacobs said those new trees could be ready to plant in the next decade, either in existing forests or former agricultural fields that are being returned to forested land.

Beyond the obvious ecological and aesthetic benefits of the new chestnut, researchers point out that the tree could also help mitigate the effects of global warming by removing carbon from the atmosphere. All trees do that of course, but the American chestnut would be particularly good at it, since it grows big quickly, explained a researcher:

“Each tree has about the same percentage of its biomass made up of carbon, but the fact that the American chestnut grows faster and larger means it stores more carbon in a shorter amount of time,” Jacobs said.

No word yet on how the hybrid’s chestnuts taste roasted, you know, over an open fire…