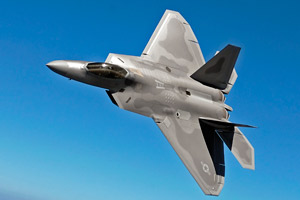 This is Part III in a Mother Jones special report on the defense budget. Click the links for Parts I, II, IV and V.

A quick primer on the problem programs Gates wants to cut and the ones he left intact:

Designed for dogfighting with Soviet planes, an F-22 costs $351 million, more than double the original projections. It was put into production before being fully tested, and, not surprisingly, has run into all sorts of snags—in fact, it has never flown a single combat mission in Iraq or Afghanistan. Gates wants to buy just 4 more, capping the US’s collection at 187 instead of the 243 that the Air Force wanted.

However, Lockheed Martin cannily ensured that manufacturing and assembly for the planes was dispersed across at least 44 states, including Texas and California, which have powerhouse congressional delegations. Earlier this year 194 representatives and 44 senators wrote to President Obama urging him to buy more F-22s, and in mid-June lawmakers on the House Armed Services commmittee inserted money for 12 more jets into the defense budget authorization bill. The fate of the F-22 will be the test of whether Gates can get his budget through Congress more or less intact.

Gates actually likes this long-haul plane but says that the Air Force already has 205 of them and doesn’t need any more, thanks very much. Try telling that to those thoughtful folks on Capitol Hill who recently slipped $2.17 billion for the planes into a recent war supplemental bill. The C-17s are another handy gauge of how the administration’s budget proposal is faring on the Hill, because the plane has a lot of fans.  Sadly, even Sen. Claire McCaskill (D-Mo.), who is normally great on the subject of wasteful government spending, has been urging Gates to buy more C-17s. Boeing, which makes the C-17, says that it provides 900 jobs in Missouri, or 6,000 direct and indirect jobs.

This is the flagship of the Army’s fancy modernization program, conjured up by Donald Rumsfeld. It consists of weapons, vehicles, and robots linked by a common communication system, and is yet another case where sci-fi wish lists were put into action before the technology was actually proven. (Exhibit A: the genius who ordered a tank that can be transported by plane before anyone knew whether that was possible.) The FCS contract also ceded way too much oversight responsibility to the contractors—in this case Boeing and Lockheed—and so predictably costs got out of hand. The overall price tag has jumped 73 percent since 2003 to about $159 billion. An internal DOD analysis from 2006 predicted that taxpayers will eventually get stuck with a $203 billion to $234 billion bill if the program is allowed to continue.

Gates wants to axe some of the most controversial, pie-in-the-sky parts of FCS—thus saving a tidy $87 billion—and rethink the entire program in the coming months.

Lockheed Martin was supposed to deliver 23 next-generation helicopters to be used by the president and other high-ranking officials. But the helicopters are six years late and will cost twice the original estimates. Obama called them a poster child for “the procurement process gone amuck.” The DOD’s new undersecretary for acquisitions, technology, and logistics, Ashton Carter, cancelled the program in May.  Still, the existing presidential helicopters are pretty old, and it’s worth watching closely how Congress decides to replace the failed contract.

These ships were supposed to cost $4 billion but independent assessments put the real price at closer to $6 billion. They weigh 14,500 tons, so they’re not exactly nimble. The Navy initially signed up for 16 to 24, but as problems piled up it decided that it could really use the money for something cheaper and more versatile. So it cut the total DDG-1000s it planned to acquire to eight, and then decided to buy just two instead. However, a group of lawmakers from the New England states where the destroyers are made (mostly Maine and Massachusetts) threw a fit. This year Gates will attempt to phase out the program at three destroyers.

Gates chopped two of the most problematic aspects of this program—the Airborne Laser Prototype aircraft and the Multiple Kill Vehicle, both flawed Soviet-era relics.

The Boondoggles Gates Should Have Axed

However, while the Obama administration proposed some sound cuts, they didn’t go far enough. In a couple of cases, Gates allows a severely troubled program to bleed money for a few more years instead of ending it right away. If it makes no sense to buy 60 more F-22s, why even buy 4? The same logic applies to the DDG-1000, which Gates should have canceled instead of caving to congressional demands for a third ship. Plus, he barely shaved an inch off missile defense spending—his cuts only represent 10 percent of the total missile defense budget.

Worryingly, Gates also signed up for a couple of obvious clunkers. One is the Littoral Combat Ship, yet another Lockheed project rushed into development before testing was complete. The LCS’s costs have almost doubled over first estimates.  “We’d see a real change if he said that we’ll test the hell out of it and make no further decisions until we see what we got,” says Winslow Wheeler of the Straus Military Reform Project at the Center for Defense Information. Instead, Gates committed to 55 ships.

Perhaps the biggest clue that Gates’ budget isn’t all that radical is his decision to more than double the Pentagon’s order of F-35 stealth fighters from Lockheed Martin, making it the DOD’s biggest acquisition program. (The idea seems to have been to placate Lockheed for the cancellation of the F-22.) On the face of it, the switch to the F-35 seems like a plus—they’re a comparative steal at $100 million each.

The problem is that the Pentagon has been repeatedly warned that the F-35 isn’t remotely close to being ready. By November of last year, only 2 percent of the required flight-testing was completed, and under the current production schedule, the DOD will put down an estimated $57 billion for 360 planes before the flight-testing is finished. To speed things up, Lockheed devised a plan to do only 17 percent of the required trials via flight tests, and the other 83 percent on a simulator. Unfortunately, according to a Government Accountability Office investigation released earlier this year, “the ability to substitute [simulation labs] for flight testing has not yet been demonstrated.” Read: The DOD plans to test the F-35 using equipment that itself hasn’t been fully tested. This makes some critics wonder whether we should be signing up for 2,456 of them.

The current cost estimates for the F-35 are almost certainly understated. That’s quite mind-boggling, because official projections already put the price tag for the entire program at more than $1 trillion—i.e., more or less the same size as the national deficit—once you combine the $300 billion it costs to buy the planes and the $760 billion it will take to operate and maintain them. But because the Pentagon plans to buy so many planes before the testing ensures that the technology is sound, delays and cost increases are inevitable. That Gates would double the order of F-35s under these circumstances is not an encouraging sign.