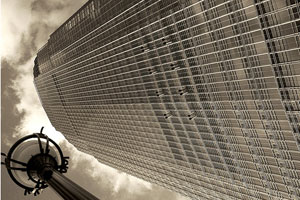 This is perhaps the most important thing I learned over my years working on Wall Street, including as a managing director at Goldman Sachs: Numbers lie. In a normal time, the fact that the numbers generated by the nation’s biggest banks can’t be trusted might not matter very much to the rest of us. But since the record bank profits we’re now hearing about are essentially created by massive federal funding, perhaps it behooves us to dig beneath their data. On July 27, 10 congressmen, led by Rep. Alan Grayson (D-Fla.), did just that, writing a letter to Federal Reserve Chairman Ben Bernanke questioning the Fed’s role in Goldman’s rapid return to the top of Wall Street.

To understand this particular giveaway, look back to September 21, 2008. It was a frenzied night for Goldman Sachs and the only other remaining major investment bank, Morgan Stanley. Their three main competitors were gone. Bear Stearns had been taken over by JPMorgan Chase in March, 2008, Lehman Brothers had just declared bankruptcy due to lack of capital, and Bank of America had been pushed to acquire Merrill Lynch because the firm didn’t have enough cash to survive on its own. Anxious to avoid a similar fate, hat in hand, they came to the Fed for access to desperately needed capital. All they had to do was become bank holding companies to get it. So, without so much as clearing the standard five-day antitrust waiting period for such a change, the Fed granted their wish.

Bank holding companies (which all the biggest financial firms now are) come under the regulatory purview of the Fed, the Office of the Comptroller of the Currency, and the FDIC. The capital they keep in reserve in case of emergency (like, say, toxic assets hemorrhaging on their books, or credit derivatives trades not being paid) is supposed to be greater than investment banks’. That’s the trade-off. You get access to federal assistance, you pony up more capital, and you take less risk.

Goldman didn’t like the last part. It makes most of its money speculating, or trading. So it asked the Fed to be exempt from what’s called the Market Risk Rules that bank holding companies adhere to when computing their risk.

Keep in mind that by virtue of becoming a bank holding company, Goldman received a total of $63.6 billion in federal subsidies (that we know about—probably more if the Fed were ever forced to disclose its $7.6 trillion of borrower details). There was the $10 billion it got from TARP (which it repaid), the $12.9 billion it grabbed from AIG’s spoils—even though Goldman had stated beforehand that it was protected from losses incurred by AIG’s free fall, and if that were the case, would not have needed that money, let alone deserved it. Then, there’s the $29.7 billion it’s used so far out of the $35 billion it has available, backed by the FDIC’s Temporary Liquidity Guarantee Program, and finally, there’s the $11 billion available under the Fed’s Commercial Paper Funding Facility.

Tactically, after bagging this bounty, Goldman asked the Fed, its new regulator, if it could use its old risk model to determine capital reserves. It wanted to use the model that its old investment bank regulator, the SEC, was fine with, called VaR, or value at risk. VaR pretty much allows banks to plug in their own parameters, and based on these, calculate how much risk they have, and thus how much capital they need to hold against it. VaR was the same lax SEC-approved risk model that investment banks such as Bear Stearns and Lehman Brothers used, with the aforementioned results.

On February 5, 2009, the Fed granted Goldman’s request. This meant that not only was Goldman getting big federal subsidies, but also that it could keep betting big without saving aside as much capital as the other banks. Using VaR gave Goldman more leeway to, well, accentuate the positive. Yes, Goldman is a more risk-prone firm now than it was before it got to play with our money.

Which brings us back to these recent quarterly earnings. Goldman posted record profits of $3.4 billion on revenues of $13.76 billion. More than 78 precent of those revenues came from its most risky division, the one that requires the most capital to operate, Trading and Principal Investments. Of those, the Fixed Income, Currency and Commodities (FICC) area within that division brought in a record $6.8 billion in revenues. That’s the division, by the way, that I worked in and that Lloyd Blankfein managed on his way up the Goldman totem pole. (It’s also the division that would stand to gain the most if Waxman’s cap-and-trade bill passes.)

Since Goldman is trading big with our money, why not also use it to pay big bonuses? It’s not like there are any strings attached. For the first half of 2009, Goldman set aside $11.4 billion for compensation—34 percent more than for the first half of 2008, keeping them on target for a record bonus year—even though they still owe the federal government $53.6 billion, a sum more than four times that bonus amount.

But capital is still key. Capital is the lifeblood that pumps through a financial organization. You can’t trade without it. As of June 26, 2009, Goldman’s total capital was $254 billion, but that included $191 billion in unsecured long-term borrowing (meaning money it had borrowed without putting up any collateral for it). On November 28, 2008 (4Q 2008), it had only $168 billion in unsecured long-term borrowing. Thus, its long-term unsecured debt jumped 14 percent. Though Goldman doesn’t disclose exactly where all this debt comes from, given the $23 billion jump, we can only wonder whether some of it has come from government subsidies or the Fed’s secret facilities.

Not only that, by virtue of how it’s set up, most of Goldman’s unsecured funding comes in through its parent company, Group Inc. (Think the top point of an umbrella with each spoke being a subsidiary.) This parent parcels that money out to Goldman’s subsidiaries, some of which are regulated, some of which aren’t. This means that even though Goldman is supposed to be regulated by the Fed and other agencies, it has unregulated elements receiving unsecured funding—just like before the crisis, but with more of our money involved.

As for JPMorgan Chase, its profit of $2.7 billion was up 36 percent for the second quarter of 2009 vs. the same quarter last year, but a lot of that also came from trading revenues, meaning its speculative endeavors are driving its profits. Over on the consumer side, the firm had to set aside nearly $30 billion in reserve for credit-related losses. Riding on its trading laurels, when its consumer business is still in deterioration mode, is not a recipe for stability, no matter how much cheering JPMorgan Chase’s results got from Wall Street. Betting is betting.

Let’s pause for some reflection: The bank “stars” made most of their money on speculation, got nearly $124 billion in government guarantees and subsidies between them over the past year and a half, yet saw continued losses in the credit products most affected by consumer credit problems. Both are setting aside top-dollar bonuses. JPMorgan Chase CEO Jamie Dimon mentioned that he’s concerned about attracting talent, a translation for wanting to pay investment bankers big bucks—because, after all, they suffered so terribly last year, and he needs to stay competitive with his friends at Goldman. This doesn’t add up to a really healthy scenario. It’s more like bad déjà vu.

As a recent New York Times article (and many other publications in different words) said, “For the most part, the worst of the financial crisis seems to be over.” Sure, the crisis may appear to be over because the major banks of Wall Street are speculating well with government subsidies. But that’s a dangerous conclusion. It doesn’t mean that finance firms could thrive without the artificial, public-funded assistance. And it certainly doesn’t mean that consumers are any better off than they were before the crisis emerged. It’s just that they didn’t get the same generous subsidies.