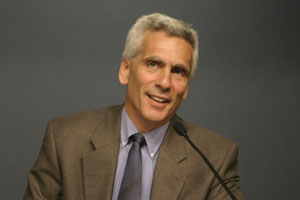 In early June, Jared Bernstein was introduced at the America’s Future Now conference, the annual confab of liberal activists previously known as Take Back America, as the member of the Obama administration’s “team of rivals” playing for the progressive side. This White House, like previous administrations, prefers to put forward a unified front and play down internal policy divisions. But when there’s a conflict between the White House and its left flank on economic matters, such as when its progressive critics have griped that the administration is more attuned to Wall Street than Main Street, the White House turns to Bernstein to smooth ruffled feathers.

So at America’s Future Now, Bernstein reaffirmed the administration’s commitment to bolstering the middle class, to “the equitable distribution of growth,” and to a financial policy that stops the cycle of what he dubbed “the shampoo economy—bubble, bust, repeat.” But he made sure to accomplish his key mission: defend the White House. He noted that he’d read the criticisms of the administration’s various economic bailouts made by his old friends in progressive circles and found them “not entirely convincing.” Before rushing out, he added that this disagreement was “good fodder for a longer discussion.”

In his nearly 20 years in Washington, Bernstein, a former jazz musician and social worker, has never been part of the inside crowd. But today, despite spending his career in progressive precincts and on the outskirts of power, Bernstein is at the center of the action, even if he doesn’t always influence the game plan. His official title—chief economic adviser to Vice President Joe Biden—doesn’t capture the full range of his responsibilities. In addition to advising Biden, he serves as a spokesman for Obama’s economic policies, regularly touting and defending the administration’s positions in the media. Out of the public eye, he serves as an emissary to left-wing Democrats and champions the progressive view in internal debates. This was especially so at the start of the administration, when the central subjects of debate were the bank bailouts, the stimulus, and the budget. “Geithner and Summers,” as one friend and former colleague of Bernstein puts it, “are very much Wall Street oriented. Much of their focus has to do with fixing the banks. I don’t think that’s Jared’s priority.”

Bernstein’s focus has always been the status of “the working man”—the middle and lower classes. He wrote his graduate thesis on welfare efficacy, and since then he’s toiled in the field of labor economics. It’s a field that focuses not on an amorphous, abstract “market,” but on a world in which the economy affects the livelihoods of everyday people.

His left-wing bona fides are impeccable. He’s signed a letter in solidarity with Noam Chomsky, and one colleague recalls him looking fondly upon the anti-World Trade Organization protests of 1999. Prior to joining the administration, he was stationed for more than a decade and a half at the Economic Policy Institute, a DC think tank closely aligned with the labor movement. He has been one of the few economists who, while clearly a part of the Democratic Party, was unafraid to question the Clinton-era orthodoxy on economics—an orthodoxy largely defined by Summers. In practice, this has meant that Bernstein is more of a realist about trade, willing to acknowledge the benefits, but not dismissing the drawbacks. He does not share Summers’ allergy to deficits. During early White House budget debates, Bernstein urged Obama to focus less on deficits than Geithner and Summers advised, arguing that in a recession bigger deficits would be preferable. A bigger deficit, after all, would be the result of a bigger stimulus. But as one high-level administration official in those meetings says, “Those guys kind of prevailed.” Bernstein, and his hopes for a larger stimulus than Obama ended up proposing, lost.

Yet President Obama has gone out of his way to acknowledge the role Bernstein plays in the administration—pointing out to the New York Times Magazine, for instance, that Bernstein is one of the top wonks in the daily Oval Office meeting on the economy, while the more centrist Austan Goolsbee is not. (However, Bernstein was conspicuously absent in a recent New York Times story on tensions between members of Obama’s economic team.) He has “exceptional access” to Obama, says one Democrat who served in the Clinton administration and now works in the Obama White House. Yet inclusion in meetings is not the same as actual power. “I don’t get the sense that [Bernstein] is the person Obama turns to for most policy decisions,” says a former Bernstein colleague and current friend. Or, as another former colleague puts it: “He’s a token.”

Bernstein’s appointment was an obvious sop to labor unions, a political thank-you for the heavy lifting they did on Obama’s behalf in Ohio and Pennsylvania during the presidential campaign. Part of that payback also included the creation of the Middle Class Task Force and the installation of Bernstein as its executive director. Long a dream of labor, this multi-agency group is intended to coordinate the federal government’s efforts to strengthen the middle class. Its mere existence is a sharp departure from recent history. And the early rhetoric has left some optimistic. But at this early stage, that’s all there is: rhetoric. At a recent MCTF meeting, Biden offered a salve to ailing autoworkers: the creation of yet another task force, with a focus on their problems. And though Biden pledged to make the MCTF “transparent,” attendees of the task force’s first public event were given tickets based on political connections (a policy subsequently changed). One participant in a closed MCTF session left disgruntled and now refers to the whole thing as a “dog and pony show.”

“Jared is an intellectual, an egghead, a wonk,” says one labor official. “This isn’t a guy who knows how to slice through bureaucracy, who can get on the phone and demand, ‘Get it to me by 4 o’clock!’ That’s not his thing.” How, then, will Bernstein be able to convert his position to one of influence? The key is mastering the inside/outside game, says Robert Reich, who famously clashed with the more conservative officials in the Clinton administration when he served as labor secretary. Within the White House, he says, “you can say what you think.” But if you’re a staffer, Reich adds, “you can’t disagree publicly.”

Bernstein is certainly giving this strategy a try. He dutifully arrives at the office at 8 a.m. and often begins propounding the day’s talking points to the cable shows, doing stand-ups on the north lawn of the White House. But other than that, his public appearances have been limited. His office refused to make him available for an interview for this article.

Behind the scenes, he’s had some minor victories. Shortly after Obama’s inauguration, Bernstein convened an intimate dinner at Biden’s residence with top officials at labor organizations. The meeting was a combination strategy session and policy discussion. Larry Summers didn’t show, although participants accepted his excuse that he was tied up with other work. By the end of February, Bernstein had successfully corralled Summers, as well as top outside economists, to participate in a small White House meeting on labor’s top legislative goal: passing the Employee Free Choice Act. According to Harvard economist Richard Freeman, who was present, “[Summers] played devil’s advocate, but in the end he clearly favored efforts to strengthen unions,” and, yes, pass EFCA. Although there’s been little movement since, muted optimism about EFCA reigns among labor officials, who expect it to pass, albeit in moderated form.

In the battle for Obama’s heart, progressive economics certainly hasn’t triumphed. But the moderate approach, pioneered by Summers in the 1990s, hasn’t totally prevailed, either. “The whole Democratic Party has adopted much of the progressive economics perspective without acknowledging it,” says Larry Mishel, president of the Economic Policy Institute and previously Bernstein’s boss. The deficit obsession that marked much of the 1990s hasn’t gone away, but it’s leveled off. And any administration officials serious about advancing free trade also are generally serious about attaching labor and environmental standards to future agreements. During his confirmation hearings, Ron Kirk, Obama’s nominee for trade representative—a pick initially criticized by labor because Kirk has been deferential to free trade agreements—surprised observers by announcing the administration would focus on enforcing current trade agreements, as opposed to negotiating new ones. “Larry Summers right now is very comfortable making arguments, often quite passionately, that Bob Reich used to be making when he was in the Clinton White House,” Obama told the Times Magazine in May. If Summers and Bernstein end up on the same page, then Bernstein will be much more than a token.

Ethan Porter is the associate editor of Democracy: A Journal of Ideas.