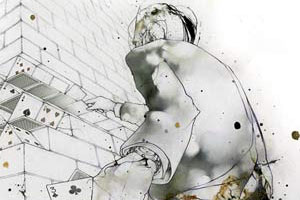 Riverton Houses, a cluster of redbrick high-rises near Harlem River in Manhattan, is the sort of development where elderly parents pass apartments along to their children. Built to shelter families of black soldiers returning from World War II, the 1,230-unit complex has long been an affordable middle-class bastion. Edna Hunter, an 86-year-old widow and retired school librarian, tells me she’s spent most of her life there. She pays just $750 a month.

So Hunter and the other tenants were understandably concerned when New York real estate tycoon Larry Gluck purchased Riverton Houses for $131 million in late 2005. Nearly all of them lived in rent-stabilized flats, paying an average of $894, while one-bedrooms in nearby areas like Central Harlem rented for $1,400 and up. Gluck reassured residents, though: He was just a regular guy from the Bronx who only hoped to upgrade their buildings.

But Gluck told the Securities and Exchange Commission (SEC) the full story when he borrowed $250 million against the complex the following December. By 2011, his prospectus estimated, half the tenants would pay nearly triple the old, stabilized rates. His company, Stellar Management, did set aside millions to redo bathrooms and outfit kitchens with stainless steel and granite—but those improvements were to entice residents to accept rent increases.

That was the plan, anyway. Two years later, the real estate bubble had popped and Gluck, after nearly doubling Riverton’s debt load, was unable to raise rents enough to cover the payments. Soon the complex was in foreclosure; its loan, bundled with others to create a mortgage-backed security, has become the quintessential toxic asset.

It all sounds like a classic tale of the bust except that, unlike ordinary people caught up in foreclosure proceedings, Gluck and his partners have made a fortune off Riverton Houses. Just as homeowners often take out some extra cash when they refinance a property, team Gluck pulled out $67 million—the high-roller version of cash at closing.

A homeowner would be on the hook for that extra cash, but Gluck’s group purchased Riverton through a limited liability shell company, which allows it to shelter its refinancing windfall in case of a default. Minus the down payment, the partners walk away with nearly $42 million.

The Riverton deal exemplifies a strategy known as predatory equity: Backed by private equity funds—which get their money from pension funds and wealthy investors—real estate players like Gluck were able to generate massive down payments during the boom. This allowed them to secure interest-only loans for high-risk bets on affordable housing. (Gluck considers the term “predatory equity” incendiary. “I don’t think anyone wants to do anything but the right thing for tenants, and also have a profitable business venture,” he says.)

Also unlike flipping a house, leveraging affordable housing affects the lives of thousands. Deals by Gluck and other big players have stripped the equity from many of New York’s developments; roughly 70,000 affordable units are overleveraged, says Dina Levy, a tenant organizer with the city’s Urban Homesteading Assistance Board. (Levy even knows of one development where residents, many of them city employees, are being driven out by real estate companies financed by their own pension funds.) Saddled with oversize mortgages, cash-strapped buildings scrimp on basic maintenance. In December, New York Sen. Charles Schumer urged the SEC to investigate, calling the situation “subprime crisis 2.0.”

When an investment like Riverton fails, only the shell company that owns it goes bust. So Stellar Management remains unscathed, and may even end up managing the complex. In fact, even as he haggles with mortgage holder Wells Fargo over the Riverton mortgage, Gluck has been negotiating to buy at least two other housing developments—Brooklyn’s Tivoli Towers and Castleton Park on Staten Island. “We don’t want him to buy us,” says Judy Montanez, a tenant leader at Castleton Park. “Look at what happened to Riverton. That’s exactly what will happen to us.”

In recent years, Gluck has branched out, snapping up affordable housing in other tight markets, like the DC area (where he recently repositioned two complexes as luxury rentals) and San Francisco, where he partnered with Florida’s Rockpoint Group to purchase the 3,000-unit Parkmerced development. He intends to demolish and rebuild parts of Parkmerced, nearly doubling the number of units, but many rent-controlled residents believe it’s an attempt to get rid of them. Ever since the purchase, Stellar Management has been embroiled in tenant disputes and litigation. Meanwhile, says resident Julian Lagos, Gluck’s firm has let the paint peel and neglected the plumbing. “They are not doing any work other than picking up trash,” he says. Queen of Mean Leona Helmsley, a previous owner, “would jump out of her grave if she saw the way it was being maintained.”

Still, there are signs that Gluck’s glory days are coming to an end. Two years ago, the government stepped in on behalf of tenants to block the $1.3 billion sale of Brooklyn’s Starrett City, the nation’s largest federally subsidized affordable development. Now the owner has agreed to refinance it for $500 million and keep the units affordable for at least 30 years.

That deal gives Levy hope that tenant advocates can convince speculators who overbet on predatory equity deals to resell their properties to sympathetic landlords. “We are now out of the predatory equity fight,” Levy says, and “into the overleveraged rescue fight.” Or, as Gluck himself admits, “the loans that were made one to two years ago are not being made anymore—fortunately for everybody.”