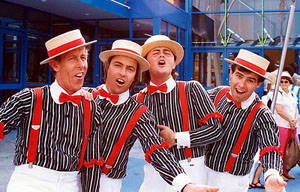 Photo used under a Creative Commons license by flickr user <a href="http://www.flickr.com/photos/obliterated/">obLiterated</a>

A teenager in a mohawk crooning barbershop tunes.

That’s what greets me as I enter the Hilton in Anaheim, California, host city for this year’s big international barbershop convention/competition. The spiky-haired troubadour (who, I come to find out, has a barbershopping grandma) is among 10,000 faithful who have converged on Disneyland‘s hometown to watch the world’s masters of four-part harmony have it out. At the Honda Center, where the competitions take place, a scrolling billboard ticks off the venue’s billings: Beyoncé…Metallica…The Barbershop Harmony Society.

I get to the center in time for the chorus and quartet finals, barbershop’s crème de la crème. (I started singing the style when I was 12, and have long dreamed of hitting the big stage.) On this Friday night, the 160-man Ambassadors of Harmony chorus performs a rollicking version of “Seventy Six Trombones”—complete with acrobatics and a costume change—and manages to upset the 11-time champ. The next day, a group with members from Tennessee, Florida, Michigan, and Missouri, fittingly called Crossroads, claims the quartet title. But the biggest buzz comes from Ringmasters, four Swedes in their 20s who warble “If You Were the Only Girl in the World” and “Hello My Baby”—you know, what that frog sings in the iconic Warner Bros cartoon: Hello my baby / hello my honey / hello my ragtime gal—to take fourth place.

After the competition, we all hit the Hilton for a session of tags, barbershop finales that are easy to learn and filled with ringing harmonies. I meet up with a group of young barbershoppers and we sing in the lobby until it gets so crowded that we have to move outside to the drop-off area and, finally, out onto the street. There, an elderly man approaches and teaches us the tag to “The Girl in the Gingham Gown.” I also run into Sylvia, a seven-year-old who recently became the female barbershop society’s youngest regional champion. (I didn’t tag with her, but rumor has it she knows her share of tags and grows exasperated when people don’t learn their parts quickly enough.)

I finally take my leave around 3 a.m., well before many of the others. Several people are singing beside their suitcases, ready to grab a taxi to the airport once dawn hits. Later that morning, when I arrive at the airport gates, I hear a familiar sound. There, one gate over, 10 men are breaking the monotony by crooning old-time tunes. I watch as one by one, people set down their Blackberries and pull off their iPod headphones to listen, and smile. Which in the end is what every barbershopper—pint-sized, old, and spiky-haired alike—is singing for.