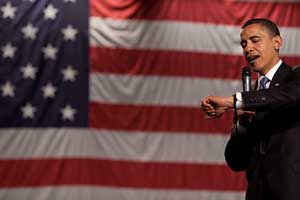 When is a presidential deadline not a deadline?

On Wednesday night, during a primetime White House press conference, President Barack Obama was asked why he had been pushing to complete action on a health care reform package by August 7, the day Congress is scheduled to shut down for its summer recess. He replied:

if you don’t set deadlines in this town things don’t happen.  The default position is inertia.  Because doing something always creates some people who are unhappy.  There’s always going to be some interest out there that decides, you know what, the status quo is working for me a little bit better.

But the next day Senate majority leader Harry Reid said there was no way Congress could meet Obama’s August 7 deadline. This was not a shocking pronouncement. Virtually no one in Washington truly believed legislation this complex could be wrapped up in time for Congress’s vacation. And with the slow pace of the recent deliberations within the Senate finance committee, it seemed especially unlikely that a Senate bill could be written by this date–let alone voted on.

So Obama, acknowledging reality, gave up on the dog-day deadline. At a town hall meeting in Shaker Heights, Ohio, on Thursday, the president responded to Reid’s statement of the obvious:

My attitude is I want to get it right, but I also want to get it done promptly.  And so as long as I see folks working diligently and consistently, then I am comfortable with moving a process forward that builds as much consensus as possible.

But not only is Obama rolling with the punches; he’s dropping the whole idea of a deadline.

At Friday’s daily White House press briefing–after Obama made a surprise appearance to say that he had spoken with the police officer who had arrested Skip Gates and to note that he regretted accusing the Cambridge cops of having acted “stupidly”–I asked White House press secretary Robert Gibbs whether Obama will be establishing a new deadline. Maybe one in September? Or October? By Christmas?

Gibbs chuckled. But seriously, given that Obama on Wednesday night had said that a deadline is necessary to concentrate the mind of Congress, wasn’t a new one required?

Gibbs replied that the deadline Obama had previously set had led to real progress, noting that various committees in Congress had taken steps toward constructing health care reform legislation “because we poked.” He said that Obama and his aides had always realized that the final bill would not be produced until after August. “We continue to believe we can see health care reform this fall,” Gibbs said.

And what about a deadline? Gibbs said nothing about a new deadline.

Meanwhile, White House chief of staff Rahm Emanuel, according to informed sources, is telling people that the demise of the August 7 deadline is no big deal. His scenario: during the August recess, members of the House and Senate will work to make sure that the House and Senate health care reform bills will be similar to one another–with a collection of different taxes being adopted to finance reform–and then in September returning legislators will have an easier time handling the final steps. Sounds easy.  If this is what happens, no deadline will be necessary. If.