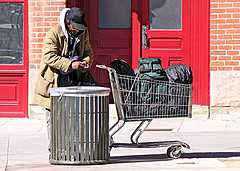 Since 2007, the city of New York has bought one way tickets for nearly 600 homeless families to the city of their choice. Destinations have included Florida, California, and even Johannesburg, South Africa, via trains, planes and automobiles. Mayor Michael Bloomberg embraced this program as a realistic and relatively inexpensive solution to New York’s overcrowded homeless shelters. Sending the families to a new city, as long as they have a friend or relative to live with there, is much less expensive than the average $36,000 a year spent on a family in shelters. Once the families arrive at their new homes, New York social workers check in on their progress periodically and the city has on rare occasions fronted funds for rent and a security deposit.

In 2006, Malcolm Gladwell wrote in the New Yorker about a similarly creative program in Denver that could have saved the city a fortune while making strides towards solving its homeless problem. The experimental program gave free housing to chronically homeless people who had accumulated massive hospital bills, which were paid for by taxpayers.  The study found that subsidizing housing for homeless people cost an average of $10,000 a year per person, about a third of what the city would spend on social services if the people remained on the street. The idea, writes Gladwell, “is that once the people in the program get stabilized they will find jobs, and start to pick up more and more of their own rent, which would bring someone’s annual cost to the program closer to six thousand dollars.” By 2016, Denver hopes to create an additional 800 housing units for the chronically homeless to compound the success of this experimental program.

San Francisco Mayor (and now CA gubernatorial candidate) Gavin Newsom announced in 2005 that his Care Not Cash program, which took homeless people off welfare in favor of social services, had decreased the number of homeless people on welfare by 84 percent, disproving critics who said it could never work. This voter-approved initiative decreased monthly welfare checks to homeless people from $410 to $59 and used the money saved to pay for homeless services, including food and shelter.

On the surface, these experiements in New York, Denver and San Francisco sound like a homerun. They appease progressives because they offer social services to a disadvantaged population. And who doesn’t love a goverment program that saves money? But they are far from perfect, and raise questions about where to draw the line and how to guarantee that once the cash runs out, the homeless won’t end up back on the streets.

Of the New York plan, Arnold Cohen, a New York homeless advocate told the New York Times, “What we’re doing is passing the problem of homelessness to another city. We’re taking people from a shelter bed here to the living room couch of another family. Essentially, this family is still homeless.” And the Denver program certainly has its problems. Years living on the street takes its toll, and some are simply too mentally or emotionally unstable to remain in a program.

It is difficult for taxpayers, and especially fiscal conservatives, to support a program that gives government support to individuals who can’t seem to help themselves. But with budgets tight and few signs of the economy bouncing back soon, it’ll be tough for cities to resist programs that reduce homelessness rates at a low cost, even if the long-term outlook is unclear.