Magnum photographer Peter van Agtmael recently won the 2012 W. Eugene Smith Grant for Humanistic Photography, one of the top awards for photojournalism. He will receive $30,000 to work on his project “Disco Nights September 11,” which continues the work van Agtmael started with “2nd Tour, Hope I Don’t Die.” The new project explores effects of the wars on people from Afghanistan and Iraq, as well as on refugees in the US, Europe, and especially in other countries in the Middle East. Herein is a review of his first book, “2nd Tour, Hope I Don’t Die,” published on MotherJones.com in 2009. (WARNING: contains some graphic images.) 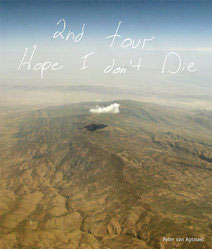 “This is how I saw America’s wars from January 2006 until December of 2008. I wanted to make pictures that reflected my complex and often contradictory experiences, where the line was continuously blurred between perpetrator and victim, between hero and villain. In time, the labels that had heretofore defined my perceptions of the world became meaningless. If I found any truth in war, I found that in the end everyone has their own truth.” –Peter van Agtmael

Magnum photographer Peter van Agtmael followed the conflicts in Afghanistan and Iraq as an embedded photojournalist from 2006 to 2008. Sure, his unflinching work captures the brutality, chaos, and carnage of war. But van Agtmael’s photos also deliver the extreme tedium, the moments of tranquility, the humanity, and the utter confusion—in ways that stir those of us here, safely at home.

That’s hard to do. The repetition of images from these wars, year after year, has numbed many of us to the story. Our eyes reflexively glaze over when we see photos of people buried under the camo helmets, packs, guns, and sunglasses.

In his book, 2nd Tour, Hope I Don’t Die, van Agtmael’s photos crack the jaded glaze we’ve all developed. Part of what mezmerizes are the captions and other written parts of the book. Here, van Agtmael connects the reader to the place before/during/after the shutter closed. What led up to a bloodied boy against a wall scowling at the camera? What happened to the soldier in the ER, staring directly through the camera at you, the viewer? It’s this dimension of backstory that makes van Agtmael’s work so exceptional. That, and his commitment to to following the story back to the United States, where it continues. 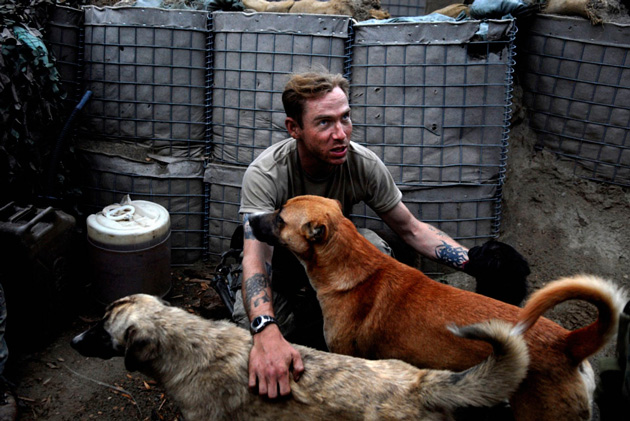 Sgt. Russell in VPB California, a small U.S. outpost in the Pech Valley. A number of strays hung around Patrol Base California, waiting for food and company. Usually the soldiers welcomed them. But I was told that a few weeks earlier, when one of the dogs urinated on a soldier’s cot, he and his buddies shot the dog to pieces. 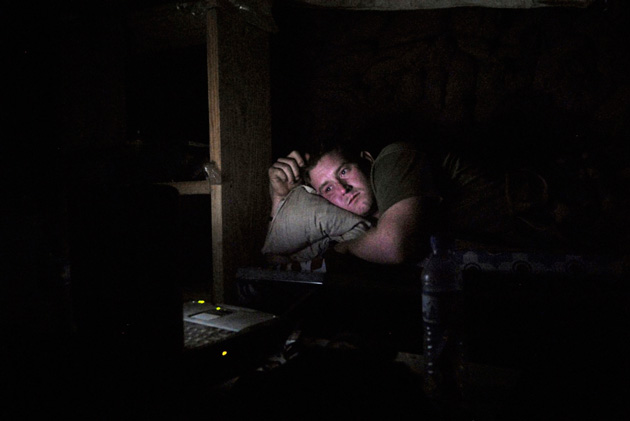 2007, Pech Valley, Afganistan
Sgt. Nick Sprovtsoff of Flint, Michigan, watching a movie on his laptop in his bunker at Patrol Base California. On his third tour, he was there to advise a local platoon of the Afghan Army. The Afghan soldiers rarely wated to patrol, preferring to watch DVDs and smoke hash. Their favorite movie was Titanic. Sprovtsoff couldn’t force them to patrol, and so he spent hours cleaning a large stockpile of weapons and doing pushups. 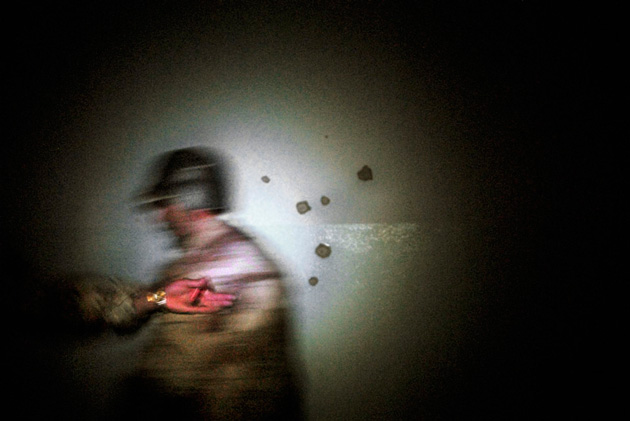 2006, Mosul, Iraq
Bullet holes in a wall after a deadly raid. Alpha Company of 1-17. 172nd Stryker Brigade was on an all-night operation to search ten houses. I was down the street with the company commander when we heard a single burst from a machine gun. There was a pause and then the air was choked with gunfire. We ran up the street towards the shooting. An American soldier, wounded and shaking, was being carried into a Stryker. The house was filled with American and Iraqi soldiers. Iraqi men and boys in their pajamas were lined up squatting against the wall, their arms tied behind their backs. One American soldier stood away from the others, looking downward and breathing heavily. He shook his head and murmured inaudibly. He’d been the one, another soldier whispered to me, who pulled the trigger. “Shot the Iraqi’s head to pieces.” 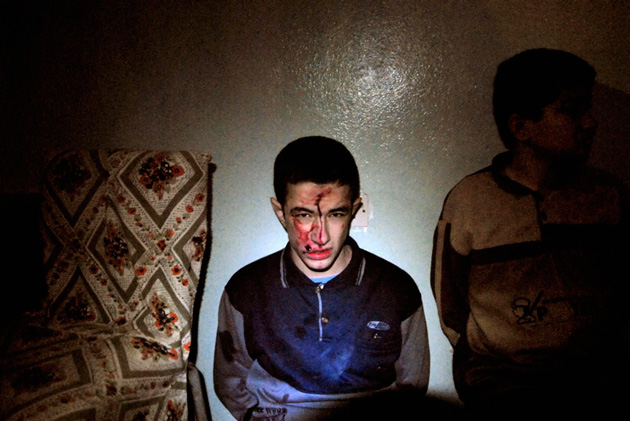 2006, Mosul, Iraq
A teenager after being hit by U.S. soldiers during a deadly raid. In the chaotic aftermath of a raid that wounded an American soldier and killed an Iraqi insurgent, this teenager, temporarily deranged by the sudden violence, had leapt at an American soldier. He face was smashed by a rifle butt, his hands were tied and he was forced against the wall. His eyes were locked on the Americans and his expression was frozen in place as the house was searched. In the next room, a woman and two young boys were curled together, trembling. When I caught them in the glare of my headlamp, they shrieked and moaned. An Iraqi interpreter went in to question one of the boys. He whispered back, and the soldiers started digging in the garden. No weapons were found there. 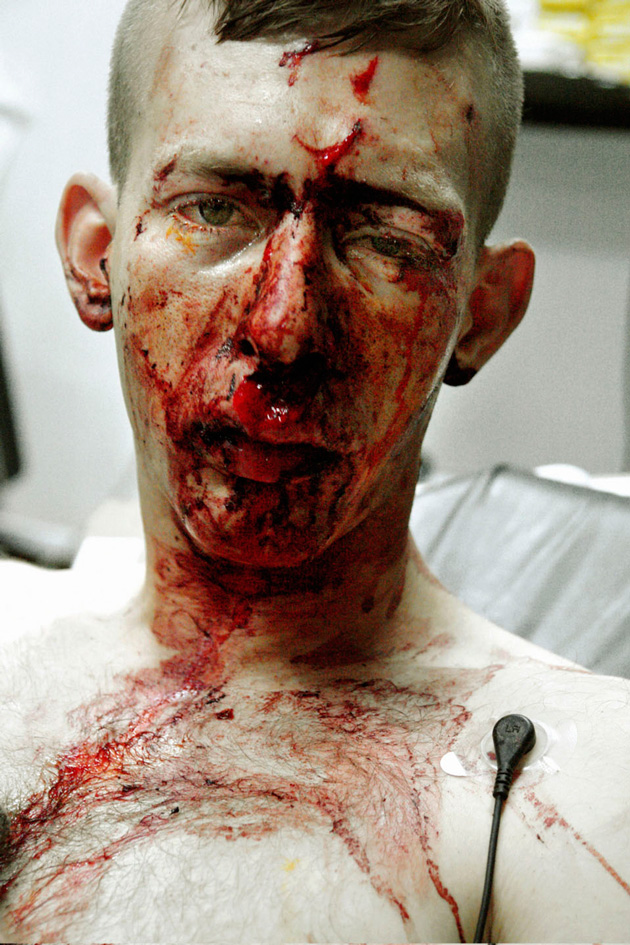 2006, Baghdad, Iraq
Sgt. Joshua Jump in the Baghdad ER after being wounded by a roadside bomb. Although shrapnel had pierced the length of his body, he was mostly silent during treatment, arms folded and watching the calm interest as medical staff cleaned his wounds. Several months later I received an email from him. He had found his picture online and wanted a copy. He wrote, “I didn’t really get the chance to see my injuries before they were pretty well healed and it’s kinda cool to see them now.” He was thankful that other people could now see “what is really going on in the world.” 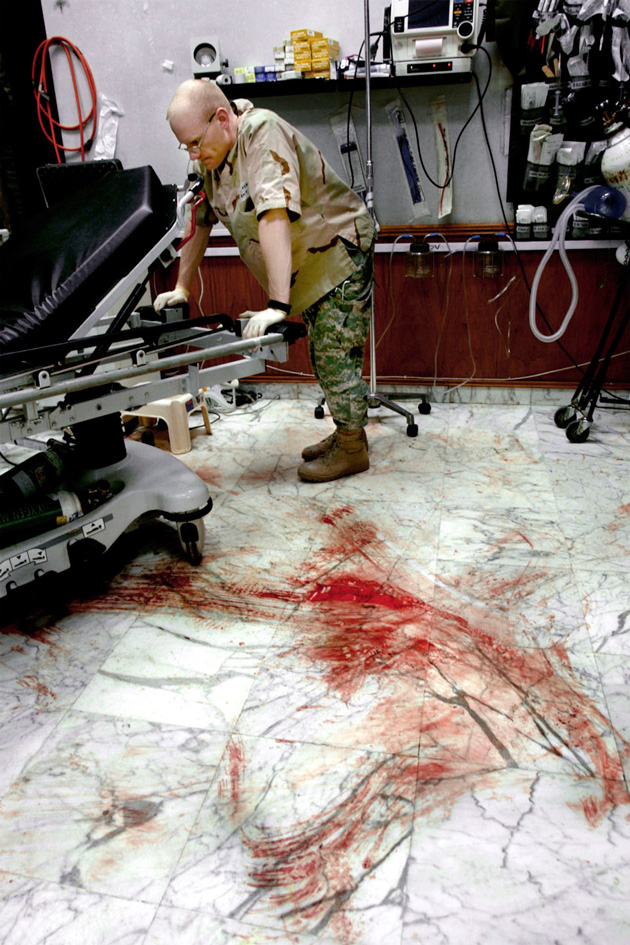 2006, Baghdad, Iraq
Cpt. Kearns, a nurse in the 10th Combat Support Hospital, takes a moment for himself after the death of a soldier in the Baghdad ER. The hospital staff did their best to objectify their own and their patients’ suffering. Their humor was dark and their expressions often flat and distant when they treated patients. The worst casualties were given nicknames. One soldier melted by fire from an IED blast was called “Goo Man.” But certain casualties would hit home, especially injured children. Some staff resorted to using painkillers and other drugs. 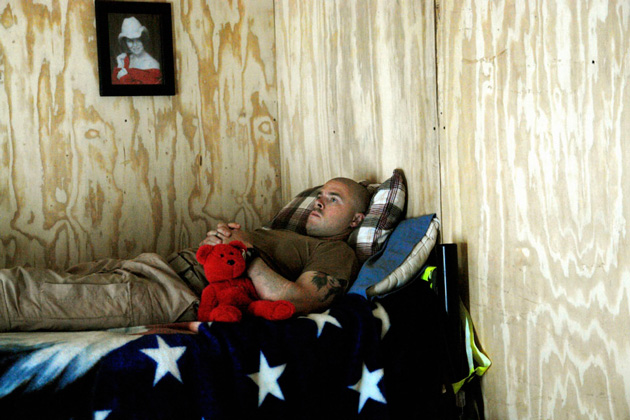 A helicopter medic waits in his ready hut for a mission call on the nine-line, the radio channel dedicated to casualty reports. His girlfriend had sent him the teddy bear for good luck, and he had another one hanging next to his carbine on the chopper. A few hours later there was a request to evacuate an Iraqi boy shot at a checkpoint. When we arrived, a small crowd was gathered around a body lying on a stretcher. The blanket was too small to cover the boy and his bare feet and thin legs stuck out. The medic lifted the blanket at the head and quickly lowered it. The family sat listlessly. They had been driving home and didn’t stop quickly enough at the checkpoint. The soldiers thought the car might be a suicide bomb and shot it up. 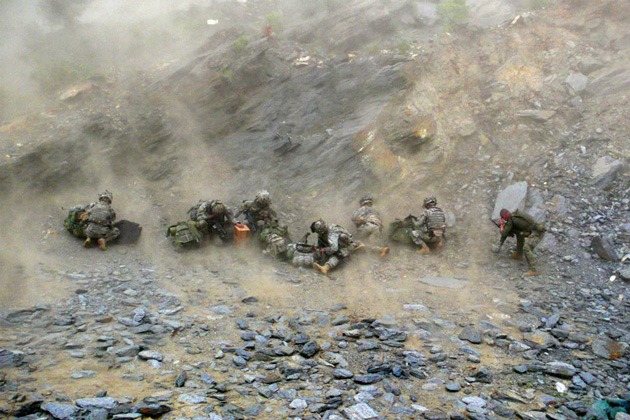 2007, Waigul Valley, Afghanistan
A U.S. Blackhawk helicopter lands at the Ranch House, an impromptu helipad built into the side of the mountain at the outpost of Aranas. There were no decent roads and all medevacs, resupply and transport were done by helicopter. Blackhawks were in short supply, and many of them helicopters were ancient, shuddering Russian models subcontracted by the U.S. military and known as “Jingle Air.” Some of the pilots had served in the Russian Army during the previous war in Afghanistan. They were storied figures, celebrated for bravery under fire and rumors of heavy consumption of vodka in flight. 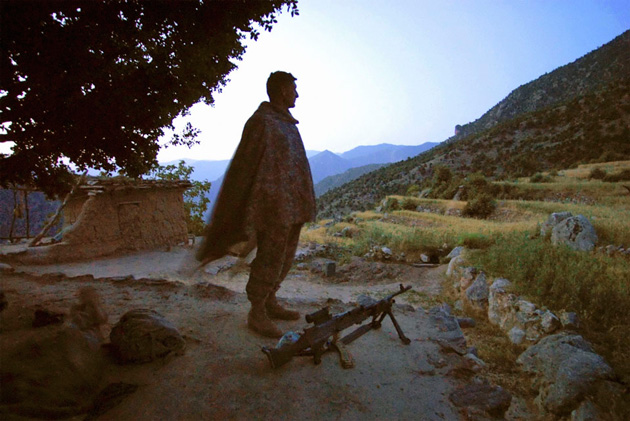 2007, Nangalam, Afghanistan
An American soldier stands guard at dawn atop a mud house overlooking a small village suspected of harboring an insurgent leader. As we approached the village past midnight, a dog started barking. His yelps carried down the valley and were taken up by a chorus of other dogs. It took another thirty minutes for us to reach the village, where a confused and frantic search turned up nothing. Exhausted, we climbed to the top of the mountain and slept for a few hours on the roof of the house. In the morning, the young lieutenant called together a meeting of the village elders. He yelled at them for collaborating with the insurgents. They eyed him coolly and replied they would strongly consider helping the Americans if they would provide security, but this was the first time they’d seen an American patrol in months. 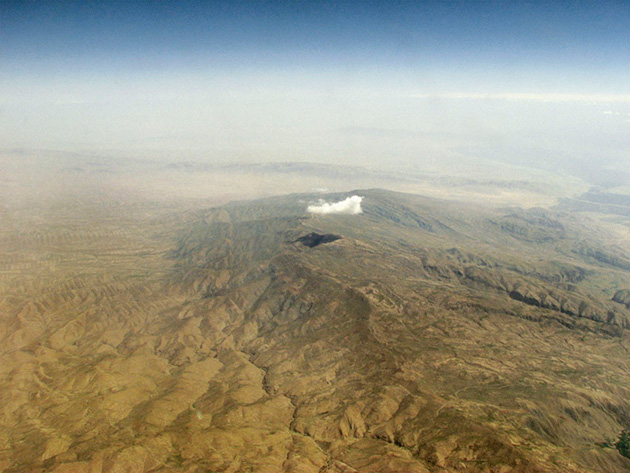 2008, Above Afghanistan
On a flight from Kabul to Mazar-E-Sharif, a relatively stable city on Aghanistan’s northern border with Tajikistan. 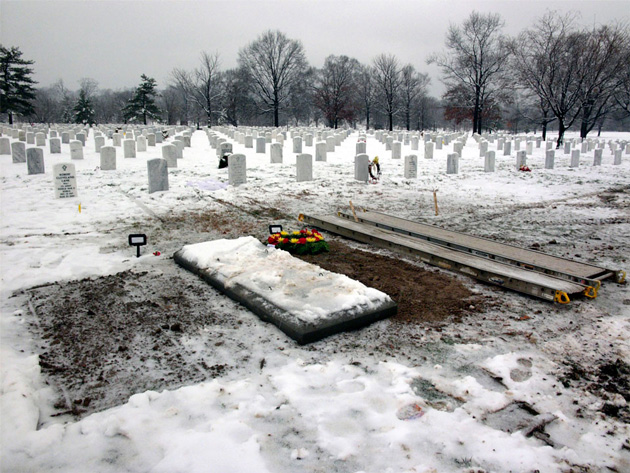 2008, Arlington, Virginia
A new grave covered by a late winter snow in Arlington National Cemetery. Section 60 is reserved for veterans and casualties from the wars in Afghanistan and Iraq. A waterproof marker with the name and rank of the deceased is set into the dirt until the headstone is ready. Most days the landscape is empty, apart from the trees and stones. 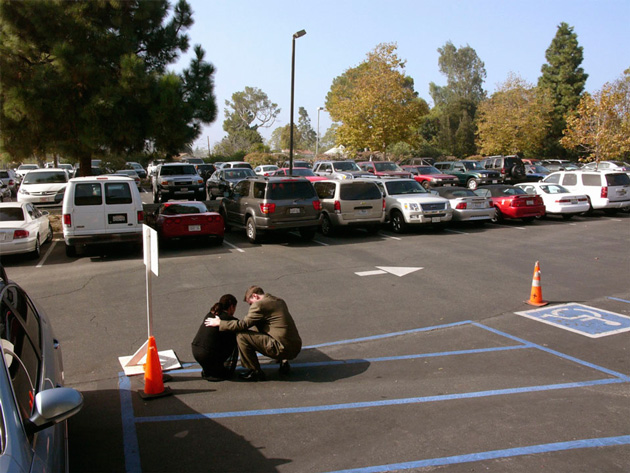 Van Agtmael won the prestigious Photolucida Critical Mass Award in 2008 for this work. 2nd Tour, Hope I Don’t Die is the end result of that award.