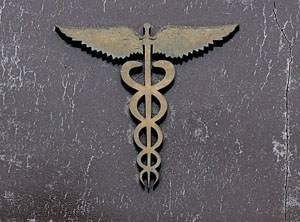 In July, in an investigative article entitled “First, Do Harm,” Mojo contributor Justine Sharrock questioned why the US medical community has been so soft on medical professionals who participated, directly and indirectly, in abuse and torture of detainees at US military prisons.

Today in the New York Times, reporter Scott Shane held out the possibility that at least a couple of these rogue practitioners may eventually face justice. He reports on the activities of two former military men, psychologists who saw an opportunity and set up a lucrative contracting business that ultimately netted millions from the CIA to help set up the nation’s torture program.

Jim Mitchell and Bruce Jessen, Shane reports, “had never carried out a real interrogation, only mock sessions in the military training they had overseen. They had no relevant scholarship; their Ph.D. dissertations were on high blood pressure and family therapy. They had no language skills and no expertise on Al Qaeda. But they had psychology credentials and an intimate knowledge of a brutal treatment regimen used decades ago by Chinese Communists. For an administration eager to get tough on those who had killed 3,000 Americans, that was enough.”

As Sharrock noted in July, no American doctor, psychiatrist, or psychologist (and psychologists were probably the most intimately involved) has had his professional license revoked, or even been ousted from a professional trade group like the American Medical Association or the American Psychological Association over torture—much less prosecuted, like the small fry at Abu Ghraib. But with Attorney General Eric Holder now mulling the possibility of a criminal inquiry, Mitchell and Jessen could, for better or worse, be fair game.

The Times tells the story of how the men became intimately involved with a program called SERE, which stands for Survival, Evasion, Resistance, Escape. It was originally conceived (borrowing, in part, from the isolation research of the late Canadian psychologist Donald O. Hebb) to help US troops resist coercive techniques applied by their would-be captors. But after 9/11, SERE was made into an offensive program, used to train the interrogators instead.

Shane tells how the Mitchell-Jessen plan was applied to Abu Zubaydah, an Al Qaeda operative, at a secret CIA jail in Thailand. After FBI agents used conventional methods get vital information from their prisoner, Mitchell and his CIA team showed up. From the piece:

With the backing of agency headquarters, Dr. Mitchell ordered Mr. Zubaydah stripped, exposed to cold and blasted with rock music to prevent sleep. Not only the FBI agents but also C.I.A. officers at the scene were uneasy about the harsh treatment. Among those questioning the use of physical pressure, according to one official present, were the Thailand station chief, the officer overseeing the jail, a top interrogator and a top agency psychologist.

After some weeks, Mitchell began directly calling the shots:

In late July 2002, Dr. Jessen joined his partner in Thailand. On Aug. 1, the Justice Department completed a formal legal opinion authorizing the SERE methods, and the psychologists turned up the pressure. Over about two weeks, Mr. Zubaydah was confined in a box, slammed into the wall and waterboarded 83 times.

The brutal treatment stopped only after Dr. Mitchell and Dr. Jessen themselves decided that Mr. Zubaydah had no more information to give up. Higher-ups from headquarters arrived and watched one more waterboarding before agreeing that the treatment could stop, according to a Justice Department legal opinion.

The reported activities of this pair constitute what many of their peers would consider the most flagrant ethical violations. Were they criminal? That’s for Mr. Holder to decide.