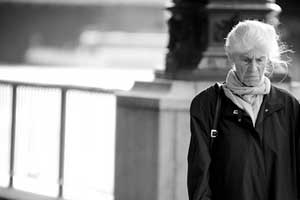 Republicans have come up with a counteroffensive to President Obama’s health care plan, and it can be summed up in one handy code word: rationing. From the GOP establishment to the fringes of right-wing radio, the conservative movement hopes to derail reform with the notion that Obama secretly plans to deny treatment to your grandmother—in order to free up cash for a socialized health care system. It sounds ludicrous. But it could have a broader and more potent appeal than you might think.

The controversy stems from a language in health care legislation promoted by congressional Democrats that would allow for payment for physicians who counsel elderly or terminally ill patients about what medical interventions they would prefer near the end of their lives and how to prepare instructions such as living wills. Under the plan, Medicare would reimburse doctors for one session every five years to confer with a patient about his or her wishes and how to ensure those preferences are followed. The counseling sessions would be voluntary.

But on right-leaning radio shows, religious email lists, and Internet blogs, this proposition has morphed into a devious scheme “guiding you in how to die.” In the words of anti-abortion leader Randall Terry, it’s an attempt to “kill Granny.”

In recent weeks, variations of this argument have been sprouting up all over the conservative ecosystem. Rush Limbaugh has been laying it on particularly thick for his 22 million listeners. “People at a certain age with certain diseases will be deemed not worth the investment, and they will, just as Obama said, they’d give them some pain pills, and let them loop out till they die and they don’t even know what’s happened…They’re preparing you to die,” he said on one show. (A caller who said she was 66 responded, “You know, Rush…they want to get rid of the old people so they can insure the illegal aliens for their voting base.”) And it gets even more sinister: Rahm Emanuel’s brother Ezekiel, a physician and White House health care policy adviser is, Limbaugh says, a “central figure” who believes it’s a “waste of money to invest in health care in the elderly. ” Plus, he plans to expand hospice care. And we all know what that means!

Fox News host Sean Hannity has also taken up the cause, as has Terry, the former head of anti-abortion group Operation Rescue, who has been railing against the President’s “death care.” Donny Ferguson at the libertarian Small Government Times writes that Obama’s plan “sends government employees to your home to monitor your parenting…and forces the sick and elderly to submit to ‘end of life counseling.'” According to the Washington Post, Betsy McCaughey, the former New York politician who played a major role in derailing the Clinton health care initiative, told former GOP senator and failed presidential contender Fred Thompson on his radio show that the health care reform bill contained mandatory counseling sessions for seniors “to end their life sooner” by showing them how to “decline nutrition…and cut your life short.”

Somewhat more subtly, prominent figures in the GOP establishment are also playing off these alarmist themes. Newt Gingrich has slammed Obama’s plan for containing “too much rationing,” while Republican message guru Frank Luntz authored an influential memo advising conservative politicians to work the rationing angle. Then there’s Weekly Standard editor William Kristol, who famously devised the strategy that Republicans successfully followed to torpedo Clinton’s reform proposal in the early 1990s, and regularly uses his magazine to telegraph talking points to all corners of the conservative movement. In a recent Weekly Standard blog post, Kristol seizes upon an innocuous paragraph about cost cutting in Ted Kennedy’s powerful plea for reform on the cover of Newsweek. Kristol claims that Kennedy has “let the rationing cat out of the bag” and that “government bureaucrats are going to deem entire categories of treatment inefficient for all or certain categories of patients, and put those treatments out of bounds for doctors and hospitals.”

The congressional GOP’s official talking points also play up the prospect of rationing, claiming, “A government takeover of health care will raise taxes, ration care, and let government bureaucrats make decisions that should be made by families and their doctors.”  Not all leading Republicans have been so subtle. House minority leader Rep. John Boehner (R-Ohio) and Republican Policy Committee Chairman Thaddeus McCotter (R-Mich.) issued a statement in late July saying that the House Democrats’ health care proposal “may start us down a treacherous path toward government-encouraged euthanasia.”

The notion of rationing—with the specter of government-sponsored euthanasia thrown in for good measure—fires up the Christian conservative base. And it’s a natural irritant to libertarians, who resent the prospect of government meddling in personal life choices. But it could also appeal to other groups whose support would be politically useful to Republicans. For starters, there’s the elderly. The notion that the younger generation might be out to kill them off—or not provide them with adequate care—is understandably alarming to some elderly people. There are also the Catholics, who are deeply opposed to euthanasia. Already, questions about whether Obama’s plan will sanction the practice have proliferated on Catholic websites.

Whoever the targets may be, the scare tactics are having an effect. In the past two weeks, AARP has fielded a few thousand calls from people who mistakenly think the legislation would require every Medicare recipient to “choose how they want to die,” James Dau, a spokesman for the organization, told the Washington Post.

Perhaps the most absurd thing about this attack is that the US already rations health care: by denying insurance coverage to the poor and lower-middle class, by limiting treatment for anyone who doesn’t have the kind of Cadillac insurance that usually only comes with high-paying jobs, and by allowing pharmaceutical companies to charge such exorbitant prices for drugs that some people just stop taking them. In the current proposals under debate, some politicians also want to cut back Medicare—the closest thing to a fair, classless, single-payer system that the United States has ever had. That’s the kind of rationing that voters should actually be scared about.