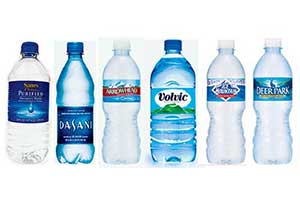 Photo: Courtesy of the manufacturers

WET REGRET Water comes from the Las Vegas municipal supply. A test by the Environmental Working Group found it had 200% of the allowable trihalomethane, a carcinogen, and included several chemicals known to cause DNA damage.

WET REGRET Coca-Cola‘s bottling plant near the village of Plachimada in Kerala, India, began pumping groundwater in 2000. When wells dried up and villagers couldn’t irrigate their fields, Coke offered a goodwill gesture: heavy-metal-laced sludge from the plant to use as fertilizer. After company ignored years of protests—and two government orders to install wastewater treatment and provide drinking water to villagers—the state ordered Coke plant to close in 2004. (Coke won the right to reopen the next year.)

WET REGRET Nestlé is seeking a permit to pipe 65 million gallons a year from a spring in rural Colorado. When critics raised concerns about the effect of climate change on local water supplies, Nestlé said it was “illogical” to base decisions on changes “many years in the future.”

WET REGRET Last fall, Japan recalled 570,000 bottles of the French water after finding the toxic paint chemicals xylene and naphthalene in the bottles.

WET REGRET In the middle of a drought, convinced officials to let it pump water from Florida’s Madison Blue Spring State Park for 14 years for no fee except a $230 permit (more than offset by nearly $1.7 million in tax subsidies).

WET REGRET Pays nothing (other than small lease and $85 yearly well fee) to pump from a Mecosta County, Michigan, spring. Citizens sued, saying the plant would damage nearby waterways, and prevailed. But Nestlé appealed and this past July won the right to continue pumping up to 200 gal./minute.

WET REGRET Created @Bottled H20Babe on Twitter: “A lover of bottled water, a convenient, refreshing beverage that shouldn’t be restricted by governments or false claims.”