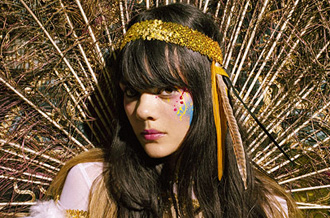 Natasha Khan might be a warrior on stage, but she didn’t look much like her musical persona, Bat For Lashes, when we met her on a dusty access road backstage at Outside Lands. Absent were the circles of glittery eye-shadow, pastiche ’80s outfits and feathered headdresses. Khan is known almost as much for her style as for the haunting lyrics and etheral voice that distinguish her sophomore album, Two Suns. Adorned in a simple red dress and brown moccasins with just a hint of blue and gold around her eyes, the singer/songwriter sipped tea and chatted about touring with Radiohead, building buzz in the States, and life after the Big Apple—not to mention magic carpets, emerald cities and the Freudian psychology of Steven Spielberg.

Mother Jones: Is this what you’ll be wearing on stage?

Natasha Khan: No, but I want to be comfortable because with festivals it gets quite sunny. It’s not so hot which is good. When we played Lollapalooza, it was like 96 degrees and I was wearing full, like, a sparkly leotard and it was a bit much. So I might wear something a bit more comfortable but I’m not sure yet.

MJ: You went from New York City to Joshua Tree National Park on this album. Why?

NK: I wanted to be somewhere that was just really the opposite of New York. [In Joshua Tree] I set about creating my mythology, I suppose. The duality of the landscapes definitely influenced different sounds in the music. It’s almost different fairytales. It felt like the desert and the earth and the nature were connnected to the esoteric, spiritual aspects of the record and the more tribal sounds. New York was very much to do with escapism and, like, disillusionment—being subterranian and dark and the sparkely escapist sort of elements which are more to do with numbing yourself. I started to think of this fable: The album is kind of like I go across to New York, to this City made of glass and emeralds. It’s me going through that journey.

MJ: Did you read a lot of fairy tales growing up?

NK: Yeah. My dad was very much a storyteller. He grew up in Pakistan, and being religious I think he had a lot of that moral kind of children’s stories, with moral endings. Stories about the jungle and about kings and about magic flying carpets like all that beautiful stuff. And also growing up in the English countryside, there’s like The Secret Garden, and Roald Dahl and The Witches. When I was little I would go around seeing if I saw ladies with gloves on and see if they look like they were wearing a wig. And then as I grew older, I got attracted to musicians and people who tell stories, like Nick Cave and PJ Harvey or Bjork, with her Icelandic follktale elements.

MJ: What are you working on now?

NK: I’m in a giving-out phase at the moment. When you’re making music it’s a very selfish, kind of an amazing thing to do. You spend 12 hours a day doing like, working on tiny minute details and collecting sounds. You get tears in your eyes when things sound beautiful and it’s such a nourishing thing to do. And then suddenly it flips completely the other way and you have to be generous and selfless. You almost feel that you’re not really alive in some sense except when you’re singing. You just feel like your body’s telling you to hide under a duvet or somewhere and not come out, or just scream at people. It feels like you have to be a warrior to push through.

MJ: How are you enjoying the festival?

NK: This festival I’m really happy about, because I love Golden Gate park and I love the surrounding countryside. It makes me feel more rejuvenated than drained. But there’s some big huge corporate festivals that are literally like my worst nightmare. Just zillions of people with, like, super loud techno and everyone’s fucked up on drugs and everything is concrete. I don’t quite enjoy that.

MJ: You said you get a lot of your inspiration from reading and research. What are you reading now?

NK: I’m reading about the science fiction films of Steven Spielberg. It’s basically like Freudean psychoanalysis of his films.

NK: Just because I love E.T. and them, and I looked on the Internet and just found something I’d like to read about that. Anyone can do that. I think we should do that more ofiten. If you see a subject, something you like, investigate it.