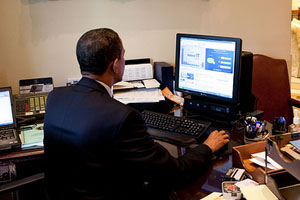 During his New Hampshire town hall meeting on health care reform in mid-August, Obama explained that under his plan, people who lack health insurance would be able to purchase it in a new exchange that offered a similar “menu of options that I used to have as a member of Congress.” Obama said that by creating a big pool of potential customers, the exchange would allow the uninsured and even small businesses to shop around, easily compare various private health care plans and get a better deal than they could on their own.

Most of the health care reform bills circulating in Congress contain some form of this concept. The exchange, in fact, is now the centerpiece of proposed plans drafted mainly by Democrats. It’s a curious development, because the concept was largely popularized by the Heritage Foundation, a right-wing think tank best known in recent years for advocating Social Security privatization during the Bush administration. Its track record ought to make Americans more wary of Obama’s proposals than any talk of “socialized medicine.”

Heritage is the source of a number of radical free-market and socially conservative policy plans that have occasionally worked their way into law, with questionable results. Among the most prominent: welfare reform, which it advocated in the mid-1990s as a means of reducing out-of-wedlock births and restoring “personal responsibility.” The idea—also embraced by a Democratic president—was considered a resounding success during the boom years of the late Clinton era when millions of poor single mothers went to work. But now that the country has hit a major recession, it has become clear that welfare reform mostly succeeded in shredding the safety net for poor children. (Incidentally, out-of-wedlock births have never been higher).

More recently, Heritage has promoted the idea that what poor women really need to get themselves out of poverty is a good man. At its urging, the Bush administration gave more than $100 million in grants to “marriage entrepreneurs” charged with encouraging poor single mothers to get hitched rather than to get welfare.  Needless to say, the poverty rate is still on the rise.

Like many of the foundation’s ideas, a health insurance exchange looks better on paper than in practice. When Massachusetts launched its health reform experiment in 2006, it relied heavily on Heritage’s policy prescriptions. Under then-Governor Mitt Romney, Massachusetts created a voluntary insurance exchange similar to the one Obama often promotes. Massachusetts outlines some basic requirements for plans that participate but it doesn’t set rates or reimbursement levels. And far from revolutionizing health care, the exchange—known in Massachusetts as the Connector—is demonstrating the limitations of relying solely on the market to solve the nation’s health care woes and rein in skyrocketing medical costs.

Trudy Lieberman, a contributing editor to the Columbia Journalism Review, has done a stellar job of reporting on the Massachusetts initiative. She recently found that the Connector had all but failed to create more affordable insurance options for people in Massachusetts as promised. Using a hypothetical family from Pittsfield in western Mass, Lieberman went shopping on the Connector website. She found that coverage for a 44-year-old couple with an income of $66,150, slightly over the eligibility limit for a state insurance subsidy, “All but three of the fourteen Connector policies cost at least $1,000 a month, or $12,000 a year—eighteen percent of their income.” The cheapest policy, at $820 a month, was no bargain.  Yet according to the state’s own guidelines, a Pittsfield family with kids could only afford $364 in monthly premiums.

Those prices also vary by age. Lieberman found that if she changed the age of her Pittsfield family to 54, the premiums jumped significantly. And Lieberman reports that it’s not just consumers who are complaining. Insurance companies have failed to garner the promised deluge of new customers, who’ve been deterred by the high prices.

In the reform bills currently pending in Congress, Democrats have modified the Connector model by introducing a public plan that would compete in the exchange to help keep costs down. But the public option seems increasingly doomed, in no small part to the Heritage Foundation itself, which is apparently horrified by Obama’s embrace of its pet policy.

In July, Heritage released a report warning that a public option would cause millions of people to lose their private insurance and serve as a Trojan horse ushering in a single-payer system. Heritage also has decried the way Obama and congressional Democrats have morphed its voluntary free-market concept into a vehicle for more federal regulation. Several of the congressional proposals would use the structure of an exchange to impose new requirements on insurance companies.

Robert Moffit, director of the foundation’s Center for Health Policy Studies, wrote in July, “If the objective of the President and Congress is to expand the role of the federal government in providing health insurance and determining the kind of health insurance that Americans will get, the national health insurance exchange is a convenient tool for that federal expansion and control.”

Obama, then, is running a big risk. The Massachusetts model suggests that if he fails to win a public option for his federal exchange plan, he could leave Americans with a largely useless shopping program cooked up by the same people who brought us marriage counseling as a poverty cure. It’s hard to call that real reform.