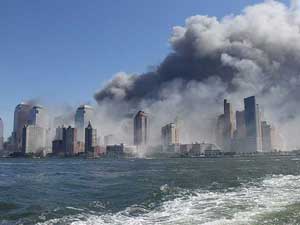 The morning of 9/11, when the alarm went off with National Public Radio’s Carl Kasell talking about planes flying into the World Trade Center, I was convinced I’d stumbled into a modern-day War of the Worlds. And that unreal feeling didn’t lift for the rest of that day—not when I got to the virtually empty Mother Jones office (there were still all those reports of more planes in the sky), not when I saw ex-CIA head James Woolsey on TV, already talking about how Saddam Hussein had to be behind this.

Nor, really, did it lift for another seven years. These were the years when we were served up lie after lie, when doubt became treason and reality itself grew increasingly preposterous. (We had a 21-year-old private from West Virginia do what?) Even the accounting, when it finally began, came not over the substance of what had happened, but focused on oddly procedural sideshows (did Scooter Libby out Valerie Plame Wilson? Did we really care, when the point was that Dick Cheney stovepiped intelligence to con the nation into war?) They were the years of truthiness—of claims just plausible enough to be believed, of accurate details gathered into deceitful conclusions, and of course of reporters who truthfully reported the lies they were told.

This is the first 9/11 anniversary when the country is no longer being run by those who so cynically exploited horror and legitimate anger. We have repudiated torture (though we’ll still send detainees to be tortured elsewhere on our behalf). We are withdrawing from Iraq, and will withdraw from Afghanistan sooner or later; most importantly, perhaps, we have elected a president who reminds the world that America is more than Gitmo and Predator drones.

But the end of the Bush era is not the end of the 9/11 era. There were deeper historical currents that made both the attack and its exploitation possible, and they still run strong.

Remember the poll that appeared around the fifth anniversary—revealing that one-third of Americans believed the government engineered the attacks or deliberately let them happen? Really, it wasn’t that surprising. At a time when both government and media were giving Americans ample reason for distrust, it wasn’t such a leap to conclude that the official story was not to be believed. The corollary to truthiness, its opposite and logical partner, was trutherism.

Trutherism is an expression of one of those deeper trends—the growing belief that no deed is too heinous, no deception too extreme, for the evil overlords in our government. It’s the legacy, at least in part, of the 60s and 70s, of Vietnam, J. Edgar Hoover, Watergate. It is also the belief that animates the birther and death-panel conspiracists of 2009: Of course the government would lie, cheat, and kill your grandmother. Why do you ask?

This is the world we live in post-9/11, and post Iraq War; a world where for many people, “the other side” has become so repugnant that nothing seems beneath it. We are no longer interested in understanding the people we disagree with; we just want to defeat them, for the good of the nation.

Which is where we come back to the events of 9/11. What made the horror of that day possible, in part, was the belief of 19 men that their adversaries were so dark and monstrous as to justify the mass murder of innocent people. And no, I’m not comparing anyone to Mohammed Atta. I’m saying that the seeds of evil are alive—however dormant—in most humans. (Germany, where I was born, found that out most catastrophically.) And we feed these seeds each time we act as if our adversaries weren’t worthy of basic respect, compassion, engagement. That is the truth of 9/11. Or at least one of them.