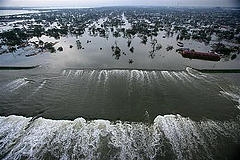 The debate over climate change mitigation versus adaptation rose to a boil this week as the World Climate Conference kicked off in Geneva, vowing to bring adaptation front and center. Speaking about this new focus, WMO Secretary General Michel Jarraud stressed the importance of addressing the impacts of climate change that are already inevitable, like the rise of sea waters and the spread of diseases like malaria.

Following the release of California’s Climate Adaptation Strategy last month, Tony Brunello of the California National Resources Agency told me that “it used to be that you’d get slapped in the face for talking about adaptation…it was seen as doing nothing and taking away from mitigation efforts.” But, he said, anti-adaptation ferver has mostly died down as it has become clearer that mitigating climate change without bracing for impact is no longer realistic.

This week, however, that debate has grown more contentious, as some environmental writers and activists have pointed out adaptation’s bargain with the devil: because resources are limited, it will undoubtedly divert funds from mitigation. Calling adaptation a “cruel eupmemism,” Climate Progress writes that this increasing focus on adaptation is unrealistic, irresponsible, and could allow, rather than prevent, more disasters like Hurricane Katrina across the world:

First, the citizens of New Orleans “adapted” to Hurricane Katrina, but I’m certain that every last one of them wishes we had prevented the disaster with stronger levees. The multiple catastrophes—extreme drought, extreme flooding, extreme weather, extreme temperatures—that global warming will bring can be suffered through, but I wouldn’t call it adaptation.

Second, a classic adaptation strategy to deal with rising sea levels is levees. Yet even though we knew that New Orleans would be flooded if the levees were overtopped and breached, even though New Orleans has been sinking for decades, we refused to spend the money to “adapt” New Orleans to the threat. We didn’t make the levees able to withstand a category 4 or 5 hurricane (Katrina was weaker at landfall than that, but the storm surge was that of a category 4).

Third, even now, after witnessing the devastation of the city, we still refuse to spend the money needed to strengthen the levees to withstand a category 5 hurricane. We refuse to spend money on adaptation to preserve one of our greatest cities, ensuring its destruction, probably sometime this century.

Adaptation is likely to play a key role at December’s UN Climate Change Conference in Copenhagen. Earlier this year, Osvaldo Canziani, a meteorologist who once co-chaired the Intergovernmental Panel on Climate Change, wrote on the conference’s COP15 website that world leaders must discuss adaptation. But he was careful to add that “this suggestion does not mean that we leave out the mitigation issue.”