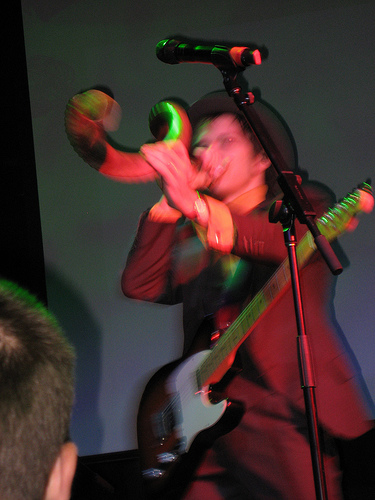 Photo by Antibalas Guitarist under a Creative Commons license

Rosh Hashanah is The Big Show, one of two days a year when every Jew, no matter how lapsed, at least considers attending the service that has existed virtually unchanged since antiquity. And every year, brave cantors test a different rendition of a traditional prayer. Sometimes those new melodies strike a cord, but mostly people want their Pepsi to taste like Pepsi and their Rosh Hashanah to sound like Rosh Hashanah.

I wanted to love Saturday night’s Hidden Melodies Revealed, the Sway Machinery’s free Rosh Hashanah concert at San Francisco’s major Reform temple. And so did the few hundred folks who turned out to see the combined forces of indie-darlings Arcade Fire, Balkan Beat Box, and others. When I arrived to find Emanu-El’s Spanish courtyard thronged by hipster masses, I felt sure we were about to witness something transcendent, music that would touch the observant and the lapsed alike. After 14 non-stop hours of prayer and ritual, I was ready for something completely different. Some small part of me even hoped this could be what klezmer revival was a decade ago—a wedge into Jewish culture for the masses.

Instead, the concert was what my mother would call “a good idea, poorly executed.” To put it another way, I was really glad I hadn’t brought my mother. When the lights dimmed at 10 p.m., roughly two-thirds of the temple’s massive sanctuary was full. By 10:03, pretty much everyone over 30 had cleared out. It all started innocuously enough, with a brass rendition of Judaism’s central prayer. But the intricate and vaunted melodies of the High Holy Day liturgy just never quite matched up with the music. The product was discordant at best, and ear-splittingly loud. Within 15 minutes, a third of the audience was gone. Another third were pressed against the impromptu stage, while the final portion sat transfixed, unsure whether to rock out or melt into their seats.

There are ways to do religious music so that it’s moving to the secular and the faithful alike. Matisyahu—who sings a version of the sacred Shema in his single “Got no Water”—has made a career out of it. Unfortunately, the Sway Machinery hasn’t found that balance yet. I’ll call it a failure in the tradition of ambitious Rosh Hashanah failures all over the world. Better luck next year, guys.