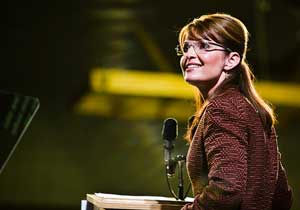 Here come the neocons again—and this time with Sarah Palin.

A group of conservative foreign policy advocates—including a bevy of neoconservatives—this week sent President Barack Obama a letter urging him to stand firm in Afghanistan and vowing their support for him (on Afghanistan) if he did so. The letter was organized by the Foreign Policy Initiative, a think tank put together by leading neoconservatives Bill Kristol and Robert Kagan, and signers included the pair and such neocon stalwarts as David Frum, Max Boot, Robert Kagan, John Podhoretz, Clifford May, Danielle Pletka, Randy Scheunemann, Dan Senor, and Gary Schmitt. But two high-profile right-wingers also added their names: Sarah Palin and Karl Rove.

The letter is reminiscent of the neocons’ efforts before the Iraq War to whip up support for US military action against Saddam Hussein, an effort promoted by Kristol’s think tank of the time—the Project for a New American Century. But Palin’s involvement makes this recent letter more intriguing than the usual rerun. After all, some conservative intellectuals dismissed Palin when she was Senator John McCain’s running mate—partly because of her apparently flimsy knowledge of foreign policy (she once referred to Afghanistan as “our neighboring country”).

In a scathing op-ed at the time McCain picked her, Frum wrote:

Palin’s experience in government makes Barack Obama look like George C. Marshall. She served two terms on the city council of Wasilla, Alaska, population 9,000. She served two terms as mayor. In November, 2006, she was elected governor of the state, a job she has held for a little more than 18 months. She has zero foreign policy experience, and no record on national security issues.

Her divisiveness is not just within the country, it’s divisive within the party, and many fear, as I do, that while she’s very popular with some Republicans…she represents a future that leads the party both to political defeat and then to ineffectiveness in government.

But Frum’s fellow neocons are now happy to have her as a comrade. One of the signers tells me a reason she was recruited for this letter was to “lock her in.” That is, the neocons are fearful that Republican politicians may go squishy on Afghanistan or come to see it as another opportunity for an attack on Obama. (When columnist George Will recently called on Obama to “substantially” reduce US troops in Afghanistan, he provided cover to GOPers skeptical of Obama’s policy and/or looking for yet one more reason to bash him.) The neocons figure that if they grab a potential 2012 GOP presidential contender and get her to commit to a hawkish position on Afghanistan, it will be easier for them to hold the line on Afghanistan within Republican circles. “It’s laying down a marker,” this signatory says. The question for Frum and the neocons is, do you regard Palin as a useful idiot?

Rove’s signature also raises a question: Does he really believe what the letter says? It complains that the war has been “under resourced” and that this “has cost us and the Afghans dearly.” It bemoans a “flawed American strategy” and “errors of previous years.” But who underresourced the war, who devised a flawed strategy, who committed these errors of previous years? The Bush-Cheney administration, in which Rove served. By signing this letter, Rove appears to be acknowledging that his team screwed up. What a mea culpa.

Then there’s Kristol. He seems to have had a conversion. In July 2007, he wrote a piece for The Washington Post headlined “Why Bush Will Be a Winner,” praising the Bush presidency and arguing it would be recognized as a success. In making this case, he wrote, “The war in Afghanistan has gone reasonably well.” How does that square with the characterization of the war—underfunded, flawed strategy, riddled with errors—contained in this letter Kristol not only signed but helped to originate? When was he spinning—then or now?

Having led the nation into the war in Iraq with phony WMD charges—before the mission was accomplished in Afghanistan—the neocons have zero credibility. It is precisely because they succeeded in pressing the Bush-Cheney administration to invade Iraq that the military effort in Afghanistan was neglected. According to a 2008 Congressional Research Service report, the Bush-Cheney administration spent $608 billion on the war in Iraq, compared to $140 billion in Afghanistan. The signatories of the letter share responsibility for the “errors” they now decry.

That doesn’t stop them from charging ahead. And with Obama losing public support for his expanding war in Afghanistan and congressional Democrats raising more questions about this endeavor, there might come a day when he needs these neocons and their support for the war. But given their past record and their current disingenuousness, this group of policy wonks ought to have no standing in any foreign policy debate. Not even with Sarah Palin at their side—or in their clutches.