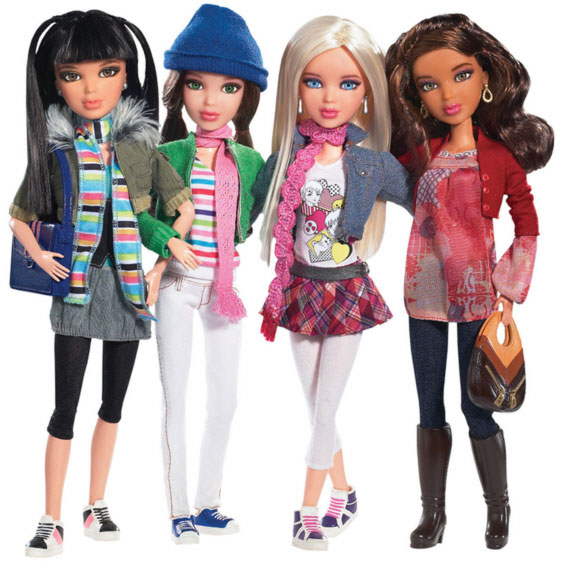 Spin Masters, the creators of Tech Decks (the bane of every school teacher’s existence), recently released a new line of dolls in an effort to compete with Barbie’s half-century iron-clad hold on the market. Toymaker MGA tried a similar trick once with the release of Bratz (the bane of every feminist parent’s existence); then a court determined that the rights of the Bratz line belonged to none other than Barbie’s maker, Mattel.

The self-proclaimed rulers of boys’ toys, Spin Masters are looking to break into the girls’ toy market by creating what “girls really want.” Apparently three years of development determined that what girls really want is…more of the same, but with articulated action-figure-like limbs. What started as a fully articulated “fashion robot” evolved into the top-selling Liv Dolls, who each have storylines continually updated via the LivWorld website (fully accessible for one year after purchase):

“Spin Master ….also gave its characters—four friends from an imaginary high school—backstories and imperfections that make them seem more real than the aspirational Barbie astronauts, beauty queens, and Presidential candidates.”

For all of Barbie’s flaws, I’d rather girls 6-10 aspire to be a presidential candidate or an astronaut instead of “following their dreams” by getting jobs at the mall—what the Liv dolls are doing according to their online diaries. Not only do the dolls ask girls to bring their aspirations down a notch, the depth of each character and the ability of girls to relate to them is pretty stereotypical and just as flimsy:

Alexis: A head-turning African American girl who is obsessed with fashion.
Imperfection: Her little brother, who she has to babysit all the time.

Daniela: A Latina who can sing and dance and pose for the camera.
Imperfection: School smarts. Her parents want her to be an engineer, but she really wants to be a pop star!

Sophie: The blonde whose calling is to be “Hairstylist to the Stars!”
Imperfection: She’ll screw up your makeover if she isn’t wearing her glasses. Oh, no! Not glasses!

Katie: The brunette who seems to pack in every attempt to make Liv dolls a positive alternative to their foresisters, she’s smart, athletic, and a lover of books.
Imperfection: She’s a klutz—oh, and clueless to the fact that every boy has a crush on her!

With their “extensive” back stories, it seems that Spin Masters attempted to find a space not just between Barbie and Bratz, but the other product of the Mattel trifecta—the American Girl line. At $19.99, Liv dolls are considered a more affordable option for girls who want to model their plaything after themselves, since you can change out their hair (so long as you have straight hair that takes well to curlers). But since just one extra wig will run you 12 bucks, even the affordability argument is a little weak.

Fans of Liv Dolls tout them as age-appropriate since they don’t have Barbie’s severe bust to waist ratio, or the Bratz’ virtual closet full of hot pants and halter tops:

“The small details, says Varadi, were toughest. He says he worked for months making sure the lips were right, referring to pictures of his girlfriend for guidance. ‘I didn’t want them to look collagen-injected’.”

While I’m sure his girlfriend appreciates the plastic portrayal, to me the Liv dolls still look pretty collagen-injected, anime-eyed, and vapid. It seems that for now girls looking for a real play alternative to fashion dolls will have to transgress the gendered lines in the toy-aisle sand, or (god forbid) venture into the “educational” section.