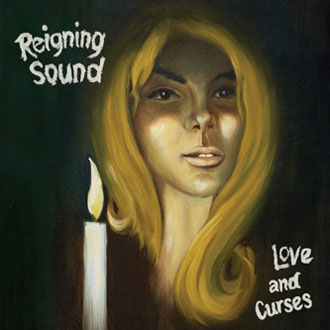 Reigning Sound
Love and Curses
In the Red

After backing Shangri-Las singer Mary Weiss on her 2007 comeback album on Norton Records, Reigning Sound is back with a new album of its own. It’s the band’s fourth studio album since 2001, and the relaxed, Southernly pace of their output matches the overall air of Love and Curses.

Frontman Greg Cartwright cut his teeth in the stalwart Memphis garage band the Oblivians. Twenty years on, his approach to music has evolved from taking old country, blues, and R&B numbers, blowing them to bits, and burying them in distortion to loving, nurturing them, and letting them breath. This applies to the numerous obscure ’60s and ’70s covers in the Reigning Sound oeuvre, as well as their own sweet tea-and-slaw songs.

Love and Curses shows Reigning Sound slowing down a bit. Like a good BBQ, slow-cooking (it’s their first new album in four years) until the songs fall off the bones, so to speak. With a wispy organ and lush layering of instruments, and drawing from a fertile knowledge of classic soul, R&B, country, blues, and pop sounds of the ’60s, the band delivers 14 songs that fill you up, but leave you coming back for more. You get plenty of heartache, and still plenty of Cartwright’s signature vocals—raspy hurting delivered in a plain and plaintive, almost pleading way.

You might call this album something like contemporary adult garage rock, and I don’t mean that as derogatorily as it might sound. More simply, garage rock for adults. It’s a perfect fit for those who’ve maybe mellowed a bit since their young days as a feisty punk or garage rock fiend. Or, for those who can still tear into a raw Gories or Black Flag song but sometimes like to slow things down, this has enough bite to keep your heart beating, without being a total washout like so much milquetoast music out there.

On a side note, Reigning Sound’s first album, Break Up Break Down, released on Sympathy for the Record Industry and immediately withdrawn due to the band’s concerns over its sound, has surfaced again, along with the long out-of-print early Oblivians 10-inch records, also on Sympathy. All are essential.