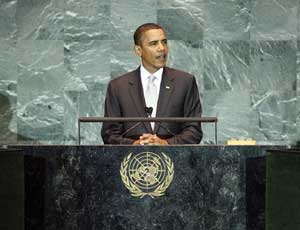 <a href="http://www.unmultimedia.org/photo/index.html">UN Photo</a> by Marco Castro.

Minutes after the close of the United Nations summit on climate change on Tuesday, Secretary General Ban Ki-Moon declared the event a success. “The momentum has shifted,” he told reporters.

“For the last few months I have been very concerned by the slow pace of the global negotiations,” said Ban. “But I listened carefully to the discussions today and I sensed that something that has been missing for the past few months has returned. It is a sense of optimism, urgency, and hope that governments are determined to seal a deal in Copenhagen.”

But, if anything, the public-facing side of the summit didn’t offer much hope. Barack Obama’s speech offered nothing in the way of specific policy directives and did little to put pressure on Congress to deliver him a bill that he can take to Copenhagen. And there were no major breakthroughs on agreements between leaders.

For those determined to find signs of progress, one might have been the speech by Chinese President Hu Jintao. His promise that the country would reduce greenhouse emissions by a “notable margin” below 2005 levels within a decade was hailed as a breakthrough – though he didn’t clarify whether that would be a binding goal. Chinese leaders said they are still discussing what the actual target will be.

Hu also pledged that China would work to raise the amount of energy drawn from nuclear and other non-fossil fuels to 15 percent by 2020, and employ other strategies to protect and expand forests and develop a more sustainable economy. Yet he maintained his desire that developing countries – even rapidly modernizing ones like China – not be held to the standards of developed countries. “Developing countries need to strike a balance between economic growth, social development and environmental protection,” said Hu.

There were other significant pledges on Tuesday: the European Union reaffirmed its commitment to cuts of 20 percent below 1990 levels by 2020, and 30 percent if other developed nations follow suit. And Japan’s new prime minister, Yukio Hatoyama, touted his promise to cut Japan’s emissions to 25 percent below 1990 levels by 2020, so long as others consent.

Now, whether these signs of progress are as major as Ban makes them out to be remains to be seen. Other world and UN leaders have recently been downplaying hopes that a final deal will be sealed in Copenhagen, especially in light of delays in the US Senate.

But Ban insisted on a sunnier assessment. “Finally we are seeing a thaw in some of the frozen conditions that have prevented governments from progressing toward a deal in Copenhagen,” he said.