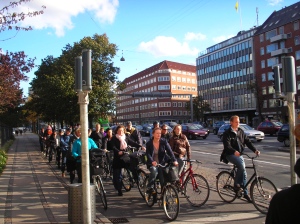 Earlier this week I wrote about the bike culture in Copenhagen, noting that part of the reason such a large percentage of trips are taken by bike here is that there is a well-crafted infrastructure supporting bike transit. But I left out the biggest factor in promoting bike transit here: the astounding 180 percent tax on cars.

Yes, that’s right—180 percent. Each car is taxed nearly twice its value at the point of purchase, and on top of that, drivers pay a sales tax and an annual fee for car ownership. With those kinds of costs, bike riding becomes considerably more appealing, which is why much of the population doesn’t own a car. Danes already pay taxes inconceivable to Americans, at a rate of about 50 percent, so car ownership is a bit of a stretch. There are only 2 million cars here to 5.5 million people, meaning only 36 percent of Danes own cars. In the US, 83 percent of the total population owns a car.

Cars may get even more expensive yet, as the country is currently considering additional economic measures to curb their use, like tolls on roads or higher annual fees for larger cars. Currently, fees range from about $100 for the smallest, most efficient vehicles to $1,000 for the least efficient. Automobiles aren’t a particularly sound investment here.

Meanwhile, the tax revenues from car owners help subsidize all that bicycle infrastructure and other forms of green transit. The country earlier this year devoted $19 billion for transportation planning and infrastructure between now and 2020 as part of the “Green Vision for Denmark” strategy.

Included in that funding is $60 million for the Center for Green Transport, a four-year, 12-person think-tank within the Road Safety and Transport Agency of the Ministry of Transportation, formed to create and institute new strategies for transportation. The project just started in September, and seems to have pretty much free range on deciding how to best use their funds. Among their projects are determining how to distribute $8 million to retrofit large trucks to make them more efficient, crafting energy efficiency ratings for delivery vans, advising government on the purchase of public vehicles, and designing a new efficiency rating program for taxis.

These are all worthy goals, of course, and ones which governments in general should direct more funds toward. But there don’t seem to be any concrete goals for the center—no targets for desired emissions cuts and no specific number of cars they want taken off the road, for example. Of course, as a representative of the center told us, they’re in large part waiting to see what goals come out of the big climate negotiations here in December, which will determine whether the country increases their greenhouse gas reduction targets. But I simply can’t imagine the U.S. government allocating that amount of money without some stated desired outcomes.

Perhaps it’s just easier in such a small country, and one where citizens happily cede half of their income to the government and trusts it to do what’s best. It’s important to note that a lot of what Denamrk has been able to accomplish on cleaning up the economy has been because of its large tax base and a federal government willing and able to provide massive amounts of cash to this cause.