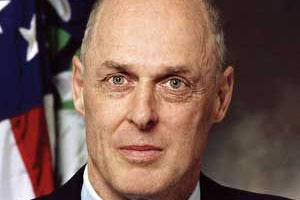 According to a new book on the financial meltdown by New York Times reporter Andrew Ross Sorkin, in June 2008, Paulson, who was the chairman of Goldman Sachs before joining the Bush administration, held a secret meeting in Moscow with the board of directors of his former employer. The problem for Paulson—then and possibly now—was that after he had been nominated in 2006 to the Treasury post he had signed an ethics letter vowing to stay clear of potential conflicts of interest with Goldman Sachs and promising not to take any action that might affect the firm’s ability to cover his multimillion-dollar pension.

As Sorkin recounts the episode, Paulson and the Goldman Sachs board happened to be in Moscow at the same time. Learning of this coincidence, Paulson asked his chief of staff, Jim Wilkinson, to set up a meeting. Wilkinson was not happy about this. “For fuck’s sake!” he thought, according to Sorkin. Paulson told him that the meeting could be considered a social gathering, but as Wilkinson worked out the details with the Goldman Sachs crowd, he asked that the session remain confidential. And the event was not placed on Paulson’s official calendar.

When Paulson and the firm’s execs got together at the Moscow Marriott Grand Hotel, the Treasury secretary gave the Goldman Sachs crew his read on what was happening with the economy and his department’s effort to prepare for handling failed banks. He also previewed for them an important speech he would soon deliver. That is, he privately shared his views on matters of direct interest to his old firm. And as Sorkin points out, Paulson had at this point never provided such a briefing to any other company (except for once “briefly dropping by” a cocktail party for the board of BlackRock).

In September 2008, as the economy imploded, Paulson obtained an ethics waiver that would permit him to deal with Goldman Sachs. But at the time of the Moscow meeting, he was still covered by his original ethics agreement. And two government watchdog groups now say that Paulson seems to have broken ethics laws when he hobnobbed with his former firm’s top brass. Danielle Brian, the executive director of the Project on Government Oversight, tells Mother Jones:

Henry Paulson’s meeting with the board of directors of his former employer, Goldman Sachs, appears to be a serious violation of ethics laws. Given that the meeting took place in the summer of 2008—months before he received an ethics waiver allowing him to participate in matters that would affect his Goldman pension—it was completely inappropriate for Paulson to discuss internal matters at the Treasury Department, and to preview an important speech he was about to deliver. This could potentially be a criminal or civil matter.

Melanie Sloan, the executive director of Citizens for Responsibility and Ethics in Washington, says Congress should investigate Paulson’s actions.

It’s hard to imagine why he thought such a meeting would be okay. It seems he was having a conversation in violation of the [ethics] ban. It wasn’t purely social—purely social is when you don’t discuss business. You talk about movies, books, your kids, but not what the Treasury Secretary is going to talk about next week. That’s basically inside information that the Goldman board received.

It certainly merits further inquiry with people who were there about what exactly Paulson said to them and whether they acted on that information. It seems like Congress might want to ask some questions of Goldman.

Whether or not this meeting actually violated the law, it was untoward enough to cause Paulson’s chief of staff to fret and for Paulson to keep the gathering hidden. In retrospect, it was quite a lapse in judgment for a fellow who soon would be asking the American taxpayers for a $700 billion blank check—part of which would go to help the mega-investment bank he once ran.

Paulson’s PR rep did not return a call and email seeking comment.