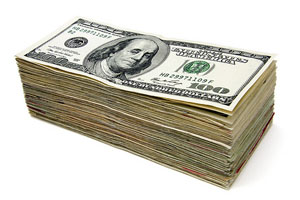 Photo used under a Creative Commons license by flickr user <a href="http://www.flickr.com/photos/amagill/">amagill</a>

This story first appeared on the ProPublica website. A version of it was co-published with USA Today.

The Department of Defense awarded nearly $30 million in stimulus contracts to six companies while they were under federal criminal investigation on suspicion of defrauding the government.

According to Air Force documents, the companies claimed to be small, minority-owned businesses, which allowed them to gain special preference in bidding for government contracts. But investigators found that they were all part of a larger minority-owned enterprise in Southern California, making them ineligible for the contracts.

Search for companies near you that got stimulus transportation contracts.

The Air Force and the Army awarded the companies 112 stimulus projects at U.S. military bases, federal contracting records show (27MB Microsoft Excel File). It wasn’t until Sept. 23—more than a year after the criminal investigation started —that the Air Force suspended the firms from receiving new government contracts.

Federal rules allow agencies to terminate contracts when it’s in the government’s interest. But neither military branch plans to terminate the stimulus contracts awarded to the suspended companies as long as they are performing satisfactorily, said Air Force spokeswoman Lt. Col. Ann Stefanek and Army spokesman Maj. Jimmie Cummings.

According to the Air Force, the companies were controlled by Craig Jackson, an African-American businessman whose firm, Sanders Engineering, has won awards from the Small Business Administration.

Jackson did not return calls seeking comment. But an attorney for his firm, Tony Franco, said the company would “vigorously contest” the suspension. He said Jackson has been praised as “someone who has helped small businesses and we believe the facts will bear out that he continues doing so.”

Allegations about one of the firms, APM LLC, became public a year ago, when an SBA audit led to the firm’s suspension from the small-business program and prompted the Defense Department’s criminal probe. That such a warning could go unheeded exposes a gap in the government’s contracting process, said Scott Amey, general counsel for the nonprofit Project on Government Oversight, which tracks contractor misconduct.

“The big problem I have—was there any disclosure of the contractors’ missteps prior to them receiving the stimulus money?” said Amey, when told of the suspended companies. “That’s the type of information you would hope government officials would have in front of them when making responsibility determinations.”

Stefanek said the projects were awarded independently by contracting officers at military bases who wouldn’t have spotted problems unless the contractors were suspended or debarred. The Air Force didn’t suspend the firms until Sept. 23 because it wasn’t officially notified by the Defense Criminal Investigative Service, which is conducting the investigation, until late August.

Gary Comerford, spokesman for the investigative service, said a criminal investigation isn’t enough to suspend a firm “because there is a presumption of innocence until proven guilty.”

Records show that on Sept. 24, a day after the Air Force suspensions, Scott Air Force Base in Illinois awarded two more projects worth $423,000 to APM. Stefanek said the contracting officer at Scott didn’t notice the suspension and that the awards have been rescinded.

To spend the stimulus money quickly, many of the projects to improve military facilities were added to existing contracts. Although those contracts had been competitively bid in the past, none of the new stimulus work the companies received was open to competition.

In addition to APM, based in Yorba Linda, Calif., the suspended contractors that won stimulus projects include 1CI Inc., of Gaithersburg, Md.; All Cities Enterprises of Ontario, Calif; Cherokee Chainlink and Construction of Hemet, Calif.; Chung and Associates of Anaheim, Calif.; and Coleman Construction in Los Angeles.

John Brewer, president of Cherokee Chainlink, said Jackson had no control over his company.

“I’m just a client,” Brewer said. “His company does my accounting. He doesn’t run my company and never has.” Brewer called the contracting suspension unfair, saying federal officials “just threw out a big net and grabbed everybody up.”

Managers of the other firms did not return calls or declined to comment.

The suspensions are temporary pending completion of the DOD criminal investigation, and none of the companies has been charged with a crime.

The stimulus projects assigned to the suspended companies include repairing hangars and installing energy-efficient windows at Andrews Air Force Base in Maryland; replacing fencing and renovating the dining hall at Wright-Patterson Air Force Base in Ohio; renovating a child-development center in Fort Knox, Ky.; repairing the airfield electrical system at Moody Air Force Base in Georgia; and stabilizing a landslide area in Colorado Springs, Colo.

Small businesses and minority contracting have gained new attention under the $787 billion economic stimulus. Noting the role of small businesses in creating jobs, the White House directed agencies to take advantage of small-business set-asides even if they conflict with another stimulus goal, open competition.

So far, small businesses have won 26 percent of the $16 billion in federal stimulus contracts, and minority contractors have won 15 percent, contract data shows. Most of the minority contracting money has gone to firms owned by Native Americans. African-American-owned firms received 2 percent of contracts and Hispanic firms 3 percent.

The allegations against Jackson involve the SBA 8(a) program, which was created to help small businesses owned by African Americans, Hispanics, Asian Americans and Native Americans win government contracts by providing several years of mentoring, training and financial assistance. Such firms can also get a leg up with contracts that only small, minority-owned companies can bid on.

According to the Air Force, Jackson established various small businesses owned by friends and family—but in reality managed and controlled by him or his companies.

After winning contracts set aside for small, minority businesses, the companies diverted a significant portion of their earnings back to Jackson or one of his companies, the Air Force said.

Jackson and his family conspired to hide the connections between the businesses by making false statements and falsifying records, the suspension order alleged.

Over the years, 19 companies controlled by Jackson—including the six that won stimulus contracts—“received more than $700 million in government contracts to which they may not have been legally entitled,” according to the order.

In 2008 the SBA’s internal watchdog audited one of those firms—APM—after concerns arose that some businesses owned by Alaska Native Corporations might be serving as conduits for larger firms.

APM is owned by Cape Fox Corporation, formed under a 1970s federal law to create business opportunities for Alaska natives who had long subsisted on hunting and fishing. Such Alaska Native Corporations have used contract preferences to expand into tourism, logging and reconstruction in Iraq.

Although the workers are not usually Alaskan natives, a portion of the companies’ earnings goes to shareholders in remote Alaskan villages. Shareholders of Cape Fox are Tlingit natives in Saxman, Alaska—a village of 370 people outside Ketchikan, on the southern tip of Alaska.

Cape Fox was among five owners of APM when APM was accepted into the small business program in 2003, according to the SBA audit. Jackson, identified in the audit as “Mr. A,” negotiated a management services agreement between APM and Sanders Engineering in exchange for 2.75 percent of APM’s contract billings.

Jackson bought out the four other APM owners, and his brother replaced him as manager in December 2004, the audit says. Jackson then sold his interest to Cape Fox in January 2005, but the relationship didn’t end: The native corporation entered into multiple agreements that entitled other firms owned by Jackson up to 7.5 percent of APM’s billings, plus 45 percent of APM’s future net income.

Because Sanders Engineering also graduated from the SBA program, Jackson is prohibited from owning more than 20 percent of any other company in the program.

In a formal response Friday to the suspension, Sanders Engineering attorney Franco said the Air Force had misunderstood SBA rules. He said the SBA has always known of the relationships and encouraged Sanders Engineering to share its administrative expertise with other small businesses.

Once an SBA success story

The scrutiny of Jackson and Sanders Engineering marks a turnabout from 2001, when Jackson was named second runner-up for SBA’s minority small business graduate of the year. That same year, he also won the Entrepreneurial Success Award for the region.

The SBA news release on the award said he transformed Sanders Engineering from a company of five employees and annual revenues of $300,000 into one with 200 employees and $36 million in revenue. Jackson won recognition for mentoring other small businesses in accounting and human resources.

Robert McDonald, executive director of the Black Chamber of Commerce of Orange County, described Jackson as a hero to other black entrepreneurs, not only for his success, but for his generosity.

On the wall of McDonald’s office hangs a photograph of himself with Jackson and civil rights icon Rosa Parks, who came for an inspirational visit at Jackson’s behest.

“That’s the kind of individual I know,” McDonald said.

According to a 2001 profile in The Orange County Register, Sanders Engineering was at the time the largest African-American-owned mechanical contractor in the United States. The article noted Jackson’s careful selection process and hands-on approach to mentoring minority-owned firms.

“If they don’t want to grow, they’re not a candidate for our program,” Jackson told the Register. “It’s like a marriage; we want the relationship to be seamless so clients can’t tell where [the protégé] ends and we begin.”

The Recovery Accountability and Transparency Board, which is charged with stimulus oversight, regularly reviews contracts for waste, fraud and abuse.

“We are aware of these issues and have taken the appropriate action,” said Ed Pound, the board’s spokesman. “We have no further comment except to say that debarred or suspended companies are a primary focus of our efforts.”

Adam Hughes, director of federal fiscal policy for OMB Watch, a nonprofit that has been monitoring the stimulus, said canceling the contracts now could backfire.

“The problem with that,” he said, “is that it may end up costing the government more money.”