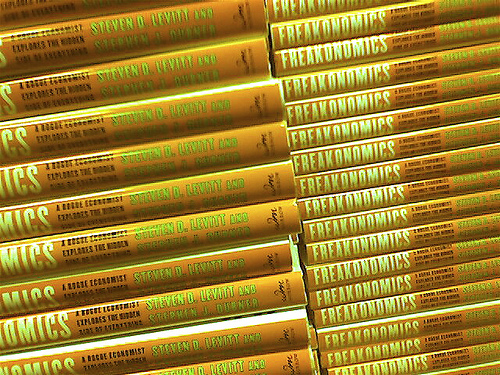 It is still nearly a week before the follow-up to Freakonomics—the award-winning pop economics tome by journalist Stephen Dubner and University of Chicago economics professor Steven Levitt—hits the shelves. Yet already the book is generating controversy. A chapter on climate change—a new subject for the authors—has attracted the ire of Joe Romm, an outspoken expert on the subject. But with the provocative title SuperFreakonomics: Global Cooling, Patriotic Prostitutes and Why Suicide Bombers Should Buy Life Insurance, perhaps that’s what the authors intended.

The chapter on climate is titled “What do Al Gore and Mount Pinatubo have in common?”. The author’s answer to this quixotic question is that both Gore and Mt. Pinatubo present solutions to global warming—but that Mt. Pinatubo’s are better. Dubner and Levitt conclude that Gore-style proposals to cap carbon emissions are ineffective and prohibitively costly. But they see the 1991 eruption of Mount Pinatubo—a volcano in the Philippines that spewed 20 million tons of sulfur dioxide into the stratosphere, lowering average global temperatures by half a Celsius degree for two years—as an example of the best way to combat climate change. The authors don’t advocate blowing up more volcanoes to avert a climate catastrophe, but rather geoengineering a similar result. The concept of geoengineering—a low cost but high-risk remedy to climate change—is highly controversial. And a closer reading of the chapter prompts a number of questions about the scientific evidence the authors cite to make their case.

Joe Romm, an MIT physicist and Department of Energy alum who is now at the Center for American Progress, was the first scientist to publicly question the duo’s enthusiastic embrace of geoengineering. Writing on his influential climate change blog, Romm takes aim at the book’s dismissal of solar power as an effective tool to lower pollution. As evidence for this argument, the authors cite Nathan Myhrvold, the co-founder of Intellectual Ventures, saying that solar panels contribute to global warming “because they’re black”—and thus generate heat that contributes to rising temperatures. In fact, as Romm points out, most panels are blue and—much more important—the clean energy that they generate greatly reduces the need to burn dirty coal or other hydrocarbons.

Romm also questions the way Levitt and Dubner characterize the conclusions of one of the primary sources in the chapter: Ken Caldeira of the Carnegie Institution Department of Global Ecology. Levitt and Dubner describe Caldeira as “among the most respected climate scientists in the world” and write that his “research tells him that carbon dioxide is not the right villain in this fight.” But Caldeira tells Romm a completely different story: “carbon dioxide emissions represent a real threat to humans and natural systems, and I fear we may have already dawdled too long. That is why I want to see research into geoengineering.”

Another questionable aspect of the chapter is its reference to the global cooling scare, a straw man issue often cited by those who oppose tackling carbon emissions. In the 1970s, some scientists mistook a temporary cooling in average temperatures caused by the accumulation of sulfate aerosols from coal power plants for the beginning of a dire long-term climate trend. If scientists got global cooling wrong, Levitt and Dubner suggest, how can we be so sure they’ve got it right on global warming? In fact, there was never the kind of deep scientific research and widespread consensus on global cooling that there now is on global warming. The authors go on to compare the movement to stop global warming to “any religion” and unhelpfully point out that “human activity accounts for just two percent of global carbon-dioxide emissions”—even though the ratio of human contribution matters less than the imbalance it causes in the global carbon cycle.

Less obvious—but no less troubling—is the way SuperFreakonomics misrepresents the research of Harvard Professor Martin Weitzman, an expert on the economics of environmental catastrophe. Dubner and Levitt report that his models have determined, “the future holds a five percent chance of a terrible-case scenario—a rise of ten degrees Celsius.” After playing up the “great uncertainty in even this estimate of uncertainty,” they follow up by asking: “So how should we place a value on this relatively small chance of worldwide catastrophe?” But focusing so narrowly on the possibility of a 10 degree rise ignores the very real risks of a temperature rise of anything above two degrees Celsius—which scientists have suggested is the maximum increase the planet can safely withstand. Indeed, last week I spoke with Weitzman and he described the high risk of catastrophe as an “inescapable property” of climate change. A three to nine degree increase in global average temperatures, which have a much greater than five percent likelihood in Weitzman’s models, would all certainly qualify as “terrible-case” scenarios.

While Dubner, who also writes a popular New York Times blog with Levitt, dismissed Romm’s post in an email to me yesterday as “hard to take seriously,” he also assumes that “there will be debate and legitimate pushback against that chapter in our book.” A debate that will be good for book sales?