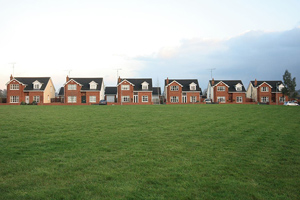 Though the deeply divided Congress can’t seem to agree on much these days, the House and Senate did manage to come together this week, with nearly unanimous votes, to extend an $8,000 first-time home-buyer tax credit. But among economists of various political persuasions, there’s widespread agreement on the Obama-backed bill: It’s a horrible policy that could wind up prolonging, if not worsening, the housing crisis.

“When governments at the state and local level are cutting back funding for everything from preschool education to nursing home care, the federal government is sending $8,000 checks” to home buyers who don’t need assistance, says Dean Baker, the codirector of the Center for Economic and Policy Research. “It might be possible to develop a more warped economic policy, but it would not be easy.” Mark Calabria, the director of financial regulation studies at the libertarian Cato Institute and a former Republican staffer on the Senate banking committee, agrees. “This is something where despite bipartisan opposition to it from experts, there seems to be massive bipartisan support for it on Capitol Hill,” he says.

Ted Gayer of the centrist Brookings Institute issued what one CNN blogger described as a “smackdown” of the credit. Simon Johnson, the former chief economist of the International Monetary Fund, and James Kwak, who writes a Washington Post column with Johnson, have called the credit “throwing good money after bad.” And conservatives—Kevin Hassett, the director of economic policy studies at the conservative American Enterprise Institute, and Ronald Utt, a senior research fellow at the Heritage Foundation, have penned pieces slamming the home-buyer credit. Even the Obama-aligned Center for American Progress got in the act; Andrew Jakabovics, the think tank’s associate director for housing and economics, criticized the credit’s extension on National Public Radio.

So why is a policy that diverse experts think is a bad idea so popular in Washington?

“Never underestimate the massive amount of political pull that the real estate industry and the home builders have,” Calabria says. The real estate industry gave $136 million to federal candidates during the 2008 election cycle, putting it fourth overall in terms of campaign contributions. The industry also spent nearly $750 million lobbying the federal government over the past two decades, $81 million of that in 2008 alone.

The biggest problem with the tax credit, economists say, is that it could well reinflate the housing bubble that helped cause the financial crisis. The tax credit is taking taxpayer money—likely more than $45 billion of it, according to the Brookings Institution—and redistributing it to buyers and sellers of homes. “We are prolonging the adjustment of the housing market,” Calabria says. Baker agrees: “There’s an implicit assumption that we want to prop up the housing market, and I’m not sure that’s what we want to do.” He questions why home buyers deserve the handout: “Do we think we should give someone $8,000 because they bought a pizza?” He also argues that home buyers are generally middle-class, and that the credit does next to nothing for the working poor. For $8,000, Baker notes, you could pay for health care for two children under the State Children’s Health Insurance Program: “There are lots of other things you could do with the money.”

Calabria and Baker both say that renters are getting an especially raw deal in this legislation. Calabria notes that the tax credit is the continuation of a “very large bias” in our federal policies toward home ownership. But in the wake of a foreclosure-fueled financial crisis, Washington’s continuing slant toward home owners deserves questioning. “Clearly you cannot continue with a straight face and go around saying housing is the absolute best investment for households,” he says.

In theory, the first-time home-buyer tax credit, which was first passed after Sen. Johnny Isakson (R-Ga.) added it to the Democrats’ stimulus package, is supposed to stimulate the economy by encouraging people to buy homes. But most people who have received the credit so far were going to buy homes anyway. The National Association of Realtors estimates that only one in five people who received the credit bought a home because of it. This means that the actual cost of the bill is north of $40,000 for each “stimulated” home purchase.

Why does Washington work this way? Calabria has a theory. “I spent seven years working in the Senate and I can say that there is an utter lack of basic economics,” he says. “I’m not talking about radical free-market stuff—just the 90 percent of stuff that Paul Krugman and I would agree on.”