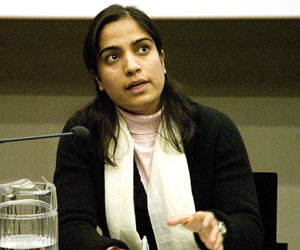 Malalai Joya has often been called the bravest woman in Afghanistan. Just 27 when she was elected in 2005, Joya has quickly become one of her country’s fiercest critics. In print and in public, she decries widespread government corruption, brutal violence, and appalling conditions for women that persist eight years after the NATO invasion. Since she was thrown out of office in 2007 for a speech comparing parliament to a zoo, Joya has been in hiding, traveling disguised in a burka with the protection of several body guards. Now she’s in the US, promoting her new book, Raising My Voice: The Extraordinary Story of the Afghan Woman Who Dares to Speak Out. Joya stopped by MoJo headquarters to discuss rumors of more troops, Hamid Karzai’s reelection, and the ongoing struggle for women’s rights in Afghanistan.

Mother Jones: What do you think about the possibility of Obama’s sending more troops to Afghanistan?

Malalai Joya: Unfortunately, Mr. Obama’s policy is quite similar to the Bush administration’s. They spend $165 million a day for war in Afghanistan, while for all of Afghanistan in a day, aid is $7 million. If Obama is really honest with the Afghani people, he must apologize and end this tragic drama of the so-called war on terror, end this occupation. Democracy never comes by the barrel of a gun, or by cluster bombs. Mr. Obama must stop arming the warlords. He must put pressure on neighboring countries, Iran, Pakistan, Russia, Uzbekistan, not to support the Taliban and these warlords.

MoJo: Do you feel that things have changed under Obama?

MJ: Mr. Obama, no question he’s different from Bush. But his foreign policy—what he is doing, tomorrow people will say he is worse than Bush. He started a war in Pakistan! And for this he gets the Nobel Peace Prize.

MoJo: I imagine you weren’t too excited when you heard that.

MJ: In nine months, I don’t know what he did for peace. In the world there are many people risking their lives—they did a lot for peace, they are living heroes.

MoJo: This summer, after the Afghani elections, it felt like people in the West started to see Afghanistan differently. Did you have faith in the electoral process?

MJ: Millions of Afghans did not attend in the election, because they know their vote, their wishes, have no voice in this election. I did not attend in the election, because we believe it is impossible for this to be a democratic election. Even international observers were talking about widespread fraud. The people of Afghanistan have a saying: The winner of this election will be the same donkey with a new saddle. And also, there is another famous saying nowadays on the mouth of my people, even the people on the streets. They say, “It’s not important who’s voting; it’s important who’s counting.”

MoJo: What is the situation like now for women in Afghanistan?

MJ: In some big cities some women have access to a job and education—but the UN reported that more than 5 million girls cannot go to school. It’s become an open secret. In some big cities they build schools to deceive people around the world, while the level of education remains very low, and even when they can go to school there is no security. In January, a 14-year-old girl was kidnapped by warlords and brutally raped. Her family found her body on the garbage heap of Kabul, on the street. There are many examples like this. Today’s situation is as catastrophic for women as it was under the Taliban.

MoJo: Tell me about your new book.

MJ: I wrote this book first to tell the truth. And second to tear the mask off these warlords who’ve come to power. The tip of the iceberg of the sorrow of my people is reflected in this book. Hopefully this book will help to open the eyes and minds of great people around the world—especially in the US.

MoJo: Whom have you spoken to on your book tour?

MJ: I spoke to a group of veterans who refused to go to Afghanistan and Iraq, saying they refused to be war criminals. Now they say the war in Iraq is a bad war, and the war in Afghanistan is a good war, but what’s the difference between them? Democratic people around the world cannot accept that this is a good war. This is just endless war.